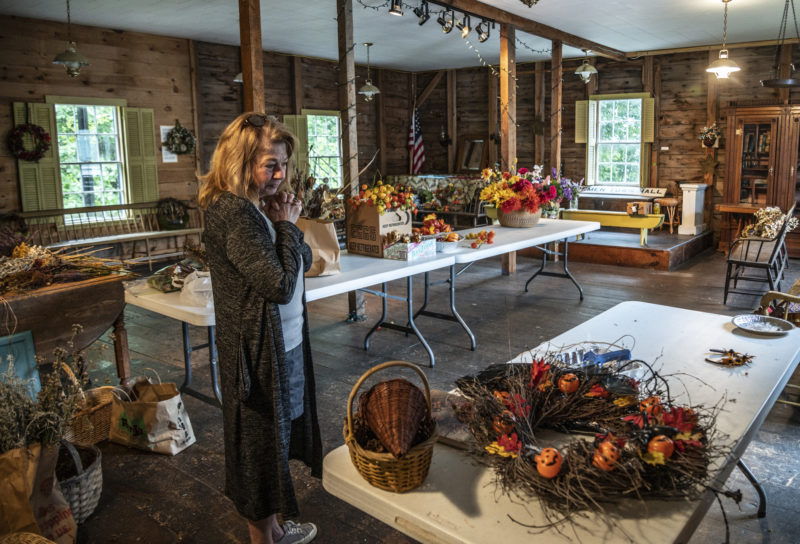 Cordelia Goth, president of Bremen’s Patriotic Club, looks over an array of dried and silk flowers in Bremen. The flowers are being crafted into wreaths and arrangements for sale at the club’s country fair on Saturday, Sept. 25. (Bisi Cameron Yee photo)

A collection of jams and jellies, pickles and relishes, sauces and chutneys glows in shades of pale emerald, or deep ruby in the light of a window at the Bremen Town House.

These are some of the hand-crafted goods that will be available for sale during the Bremen Patriotic Club’s Country Fair on Saturday, Sept. 25.

And there are many more.

There are also decor items like autumn wreaths, dried and silk flower arrangements, and decorated horseshoes for luck. 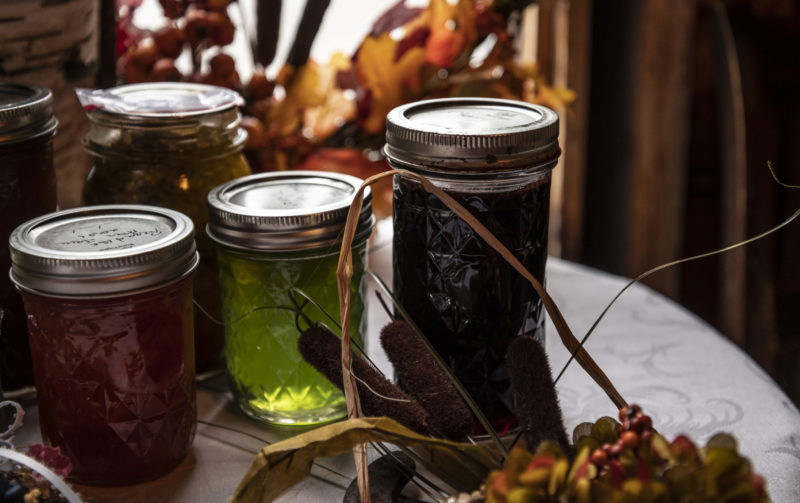 A jar of mint jelly glows among a cluster of preserves in Bremen. The homemade goods will be offered for sale during the Bremen Patriotic Club’s country fair on Satuday, Sept. 25. (Bisi Cameron Yee photo)

The Bremen Country Fair is one of the ways that the Bremen Patriotic Club raises funds in support of its mission to support its community with energy assistance, scholarships, road clean-ups, and donations to the town’s first responders, and the town library.

The club donated more than $700 to the Waldoboro food pantry in the last year, and will provide up to a dozen $500 scholarships to Bremen high school graduates.

The members of the Bremen Patriotic Club stress that the club is not a political organization, and it is not aligned in any way with any political party. The club name is a part of its history and, according to member Anna Barber, reflects a definition of patriotism that is rooted in community service and neighbors helping neighbors, not in the divisiveness of politics.

The club and its name have a long and respected legacy in Bremen that current members continue to honor. The roots of the club, its name, its purpose, and its motto, “United in Service,” date back to its formation in 1912.

Around that time the town of Bremen petitioned the state of Maine for a statue to honor its most famous historic figure, Commodore Samuel Tucker, a Revolutionary War hero who, according to a commemorative plaque, won more naval battles “than any naval hero of his age.”

But the state sent the wrong statue. 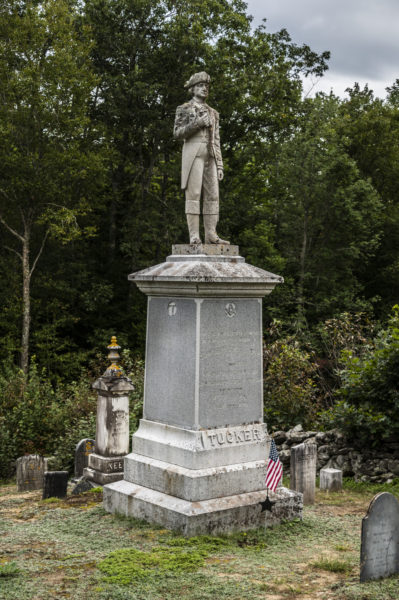 A statue representing Revolutionary War naval commander Commodore Samuel Tucker stands in the Hillside Cemetery in Bremen. When the statue was initially unveiled, it was found to be a soldier boy statue and was quickly replaced. But this replacement is still not correct – Commodore Tucker is carrying binoculars, which were not invented until the 1800s. (Bisi Cameron Yee photo)

At its unveiling, the statue was revealed to be a soldier boy and not the distinguished naval commander. The state sent out a new statue and told the town they could keep the mistake.

Twelve Bremen women saw an opportunity to make lemonade from lemons. They formed the Patriotic Club to raise funds and add a base to the soldier boy statue to commemorate the town’s Civil War veterans. The club raised $800 to commission the inscribed base and to erect the monument.

Inspired by their success, the ladies continued to meet and make a difference. Over the years they hosted suppers, created hand crafts, sponsored presentations on variety of topics, and in the 1950s, they even threw a fashion show, the “Silver Tea and Fashion Show of Bygone Days” that brought in people from New York and Boston and required assistance from the state police to handle traffic.

Money raised from club ventures over the years went toward projects from the construction of a mausoleum across from the cemetery to the repair of the Bremen Town House to the installation of a flagpole and commemorative garden at the town office.

“I like the work that we do,” said president Cordelia Goth who has been in the club for 21 years, 9 as president. “Getting out there, walking the roads, picking up trash, driving house to house to drop off Christmas cheer, getting together to do workshops for the fair.”

Barber agreed. “It ties me into the community and gives me a sense of belonging. I can do something I like doing anyway and it helps the community.”

Member Marge Jicha, who has lived in Bremen since 1977, said her younger son was one of the first recipients when the club started the scholarship program. She credits the camaraderie in the club for her continued membership and said that as she gets on in years, the club gives her a reason to keep moving, keep baking. She loves participating in the club’s initiative to bring small gifts to shut-ins at Christmas.

“That’s what we’re striving for,” Barber said. “To keep all the good things going.”

And the club still makes good use of lemons: Lemon bars are one of the offerings available for order while supplies last at the Country Fair.

This year there are two ways to shop: Either in person or online. Those interested can receive lists of available items and order via email for curbside pickup. Advance orders must be received by 8 p.m. on Thursday, Sept. 23. 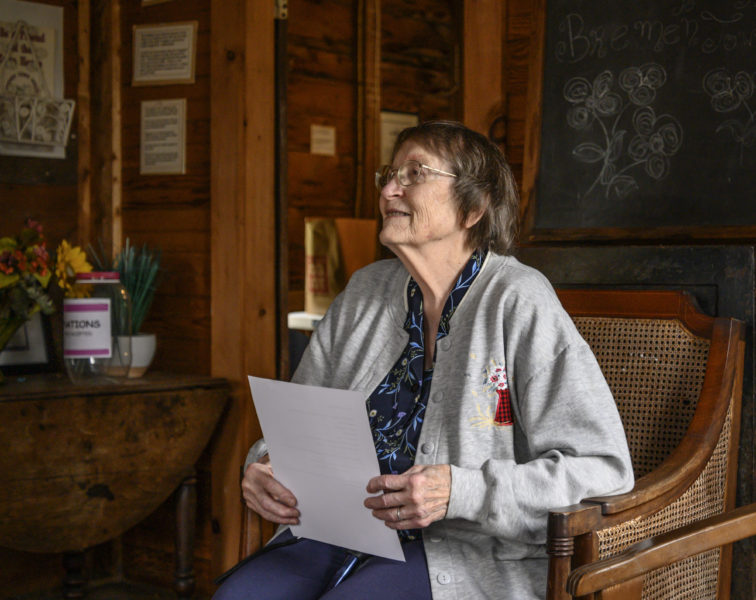 Marge Jicha holds a document detailing the recent achievements of Bremen’s Patriotic Club as she reminisces about her time with the club in Bremen. Jicha has been a member of the Patriotic Club since the 1970s and is one of many club members who will be baking treats for the club’s upcoming country fair. (Bisi Cameron Yee photo)

Items will also be available at the fair from 9 a.m. to noon Saturday, Sept. 25, at the historic Bremen Town House by the fire station at 568 Waldoboro Road.

For questions about club meetings or to join, call Cordelia Goth at 529-2993

To make a donation to support the club’s community service goals, call Marge Jicha at 529-5310.