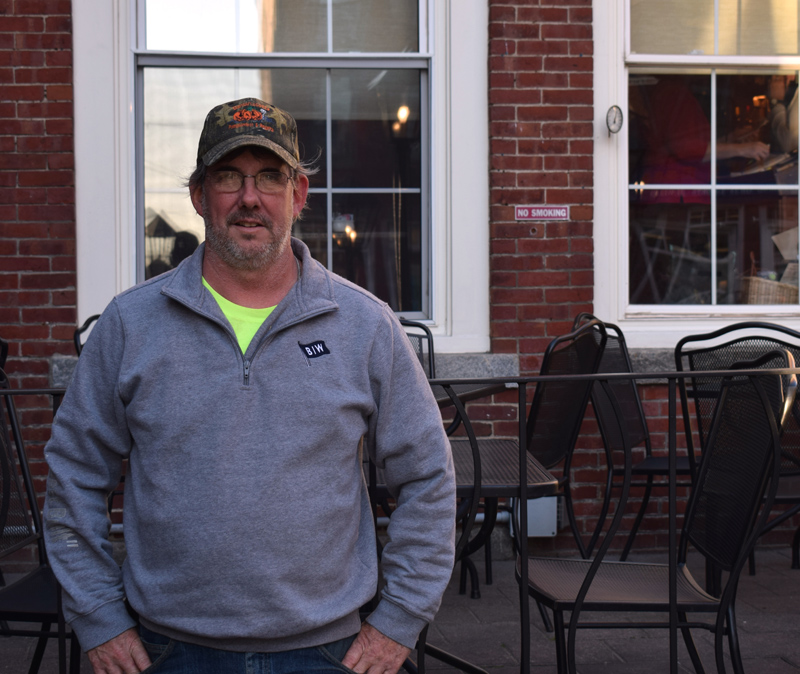 Bill Clark, co-founder of Damariscotta Pumpkinfest, at King Eider’s Pub in Damariscotta on Friday, Nov. 1. Clark will continue to volunteer on weekends, but will no longer serve as chair of the festival’s pumpkin drop, regatta, and weigh-offs. (Evan Houk photo)

Three key Damariscotta Pumpkinfest volunteers are stepping back from their duties this year, leaving the future leadership of the popular festival in question.

The three volunteers are Bill Clark, co-founder of the festival and chair of the pumpkin drop, regatta, and weigh-offs; Kathy Anderson, who handles all administrative duties and fundraising; and Sarah Maurer, finance chair and volunteer for food and deployment.

All three have been heavily involved with the festival, now looking ahead to its 14th year, since essentially its inception, when Clark and Buzz Pinkham decided to build a pumpkin boat and motor it around Damariscotta Harbor.

Clark, of Bristol, will volunteer only on the weekends now, he said. For the past 10 years, he has taken six vacation days every year to help wrangle giant pumpkins, conduct the weigh-offs, and oversee the regatta, among other duties.

“There’s other things I want to do in October. I could take longer off on the Fourth of July and be at camp. I could be sitting in a tree in October with my bow. But I can’t do any of that. It’s just all-consuming,” Clark said.

He said Pumpkinfest is a year-round responsibility and wants potential volunteers to be aware of the commitment.

“People don’t understand that this is a full-time job. Look, right now, we’ve got November to March off. But we don’t really, because you’re still answering emails and doing all this stuff,” Clark said.

If the Pumpkinfest can’t find someone else willing to use vacation days, or a retiree who is up to the task, it may need to replace Clark with three or four people, he said.

He will attend all the weekend events, including the weigh-off and next year’s Sunday regatta. However, he wants a new volunteer, or volunteers, to chair the weigh-off so he can train them on exactly what needs to be done.

The Pumpkinfest committee will need someone on the Friday before the weigh-off to set up the tent and banners and make sure the forklift and scales are delivered to Pinkham’s Plantation, Clark said.

Clark’s job usually enters another gear the following Tuesday, as he organizes pumpkins for deployment to the Twin Villages and extracts the prized seeds for the growers.

On Wednesday, it is time to load the giant pumpkins onto trailers and separate the pumpkins that will be used to build boats.

The new volunteer will have to coordinate deployment Thursday and oversee the building of pumpkin boats Friday.

“Somebody has to do all that weekday stuff, as well as being in charge of X amount of volunteers. You’ve got to be thinking three steps ahead and you have to be able to keep all these guys busy or they’re going to leave,” Clark said.

According to Clark, Pumpkinfest was originally inspired by his quest to grow a pumpkin big enough for his children to carve a jack-o’-lantern.

In 2001, he picked up some North Carolina giant pumpkin seeds from King Ro Market in Round Pond and began growing the fruit in his home garden. He ended up with five pumpkins totaling about 1,000 pounds altogether.

Next, he found a chat room on bigpumpkins.com with a burgeoning community of giant pumpkin growers, where he found better seeds to plant.

In his second year of growing, he took his roughly 800-pound pumpkin to Topsfield, Mass. for a weigh-off. There were no weigh-offs in Maine at the time. He finished 18th and held the state record for about 20 minutes, he said.

The following year, Clark approached Pinkham’s Plantation owner Buzz Pinkham about borrowing a tractor to harvest another giant pumpkin. Pinkham and Clark got to talking about giving away giant pumpkin seedlings and growing more pumpkins at Pinkham’s business.

Clark said the idea for racing pumpkin boats was gleaned from the book “How-to-Grow World Class Giant Pumpkins III” when Pinkham spied a picture of a giant pumpkin with a trolling motor attached.

Clark is an engineer at Bath Iron Works, however, his work on the pumpkin boats bears little relation to his engineering work for giant destroyers at BIW. He once tried to get a team together at BIW to build a pumpkin boat, but it didn’t come together.

And just like that, the Damariscotta Pumpkinfest & Regatta was born, and has been expanding ever since. It has grown into an annual event that brings nearly 20,000 visitors to the Twin Villages of Damariscotta and Newcastle over the Oct. 14 holiday weekend. This year, there were 75 giant pumpkins transformed into art and displayed on and around Main Street.

Clark also spoke to Anderson’s critical role as the Pumpkinfest “mom” whom the festival has come to rely on over the years.

“She’s the glue that holds this thing together and she works year-round. It’s going to be really, really hard to replace her, even if you do that with two or three people,” Clark said of Anderson.

Anderson, of Bristol, declined to discuss her role, instead stressing the importance of Pinkham and Clark’s work, as well as the hundreds of other volunteers who contribute throughout the year to make Pumpkinfest a reality.

Another key part of Pumpkinfest is the financing. If there was not enough prize money to draw giant pumpkin growers to the weigh-off, the pumpkins would never make it to town, Clark said.

The funds for the Pumpkinfest weigh-off purse come from business sponsorships, donations, and fundraising.

Sarah Maurer, also of Bristol, has been keeping track of the money coming in and going out since nearly the beginning. She and her husband, Todd Maurer, co-owners of King Eider’s Pub and other local businesses, have been sponsors and volunteers since the festival first had sponsors.

The couple also volunteers with the food at the festival.

Maurer said it is hard for her to participate as a volunteer in the months leading up to Pumpkinfest because it is a busy time for their catering business, Stone Cove Catering, with weddings and other events.

Maurer said she will be available to train any volunteer who steps into any of her former roles.

She said she hopes volunteers step up because Pumpkinfest is a great community and family event that brings a lot of business to the town in the middle of October.

“I hope some people step up. … I’m hoping the whole thing was a wake-up call,” Clark said of the meeting.