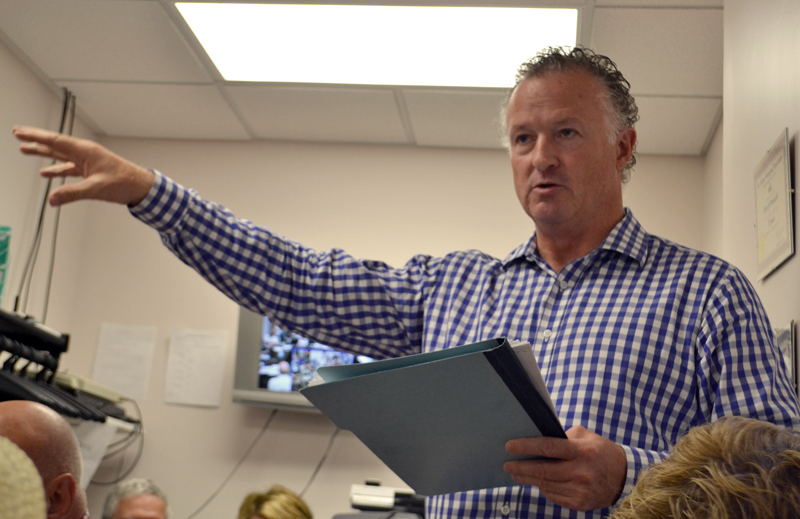 Jack Freker, one of the members of The Standard of Newcastle Condominium Association, talks about Kieve-Wavus Education Inc.’s plans to purchase the boathouse behind the condominium building during the Newcastle Board of Selectmen’s meeting Monday, June 12. (Maia Zewert photo)

The Newcastle Board of Selectmen learned about Kieve-Wavus Education Inc.’s plans to purchase the boathouse behind The Standard of Newcastle condominium building to use for a leadership program, but the plan has met with opposition from the condominium association.

Kieve-Wavus Education Inc. Executive Director Henry Kennedy presented the organization’s plans for the boathouse during the selectmen’s Monday, June 12 meeting. Members of the condominium association also attended the meeting, including developer Xavier Cervera, who purchased the property in 2013 through The Standard of Newcastle LLC and completed the building’s construction.

The property has a tumultuous history, dating back to the sale of the building from the late Waldo Waltz to a group of local investors in 2002. The investors planned to build condominiums, but zoning issues and a legal challenge from a neighboring property owner slowed the project. The investors sold the property to another developer in 2007, who encountered similar issues and, in turn, sold it to Cervera in late 2013.

In May, Newcastle Realty approached Kieve-Wavus about the possibility of purchasing the boathouse, Kennedy said.

“We hadn’t really thought about it until it was offered to us, but we always wanted a presence on the river,” Kennedy said.

The broker made it “very clear” to Kieve-Wavus that the boathouse was not residential and overnight use is prohibited, which has limited interest in the building, Kennedy said.

After visiting the property and discussing the possibilities with Kieve-Wavus trustees, Kieve-Wavus signed a contract to buy the boathouse, Kennedy said. In the weeks that followed, Kieve-Wavus had several conversations with town officials, the Maine Department of Environmental Protection, and the president of The Standard of Newcastle Condominium Association. 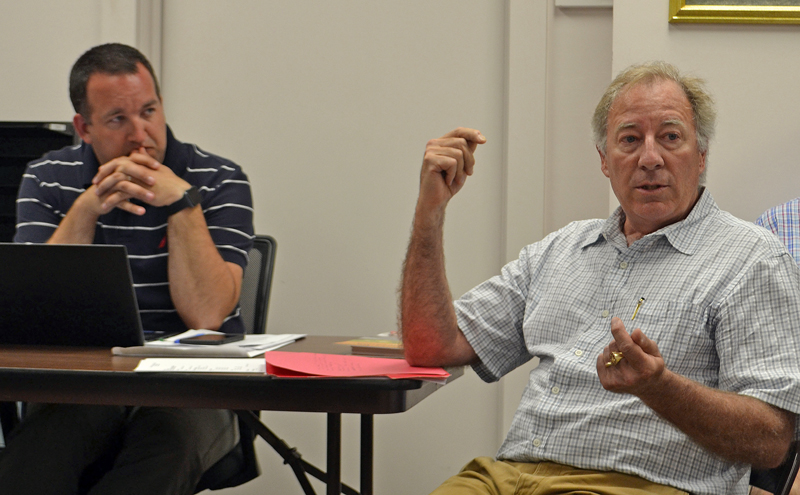 The organization also studied both the Newcastle Comprehensive Plan and condominium association documents to develop a plan for the boathouse that would complement and support the town while respecting neighbors, Kennedy said.

The primary use of the space would be for a new initiative within Kieve-Wavus’ leadership school, which is currently in development, Kennedy said.

The pilot program, which is funded through a grant from the Emanuel and Pauline A. Lerner Foundation, would connect youth from seventh grade through high school with adult mentors, according to Kieve-Wavus Director of Curricular Innovation Megan Taft. The program would serve the students of AOS 93, the Center for Teaching and Learning, the Damariscotta Montessori School, and Lincoln Academy.

A big part of the program would be “meeting kids where they are,” Taft said, and by meeting at the boathouse, the program would have a different impact than if Kieve-Wavus were to go to students at their schools.

The boathouse would also act as a launching point for exploration and study of the Damariscotta River and host other Kieve programs and events, Kennedy said.

To enhance the safety of the property, the organization plans to build a fence at the beginning of the pier and a railing around the perimeter, Kennedy said. A second exit will be added, as will larger windows on the south side of the boathouse. The addition of a flagpole is also planned.

Kieve-Wavus appeared before the Newcastle Design Review Board and received approval for the proposed changes June 1. Tor Glendinning, the architect who chairs the design review board, has worked with Kieve-Wavus on several projects and recused himself from voting on the organization’s application, he said.

Kieve-Wavus’ decision to apply for permits and meet with town officials has infuriated the condominium residents, who have not given the organization permission to move forward with the project, according to Hylie West, the attorney representing the condominium association.

The association owns and oversees all the common areas of the property, including the pier leading out to the boathouse, West said. 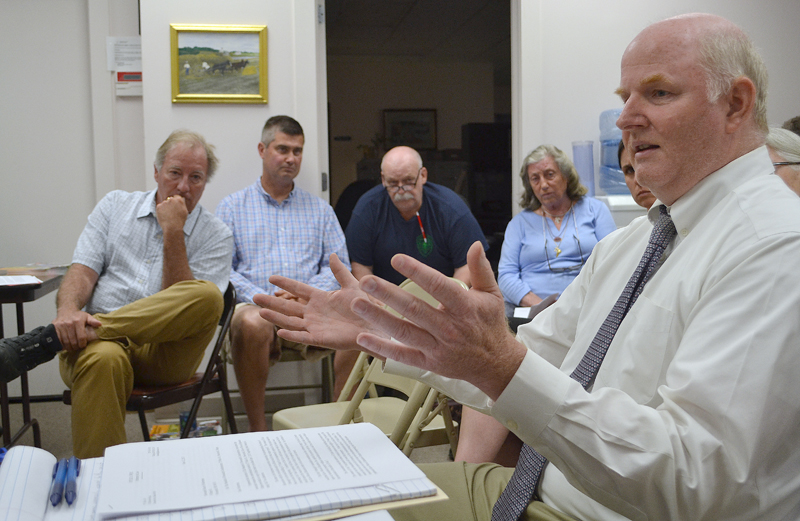 West said the owners of condos at The Standard are unanimously opposed to the project, which is “way beyond” what they expected it to be.

Jack Freker, an owner of one of the condominiums, presented nine points detailing the association’s opposition to Kieve-Wavus’ plans, including what he said was the misrepresentation of residents’ feelings about the project. A letter from Kennedy to the selectmen describing Kieve’s plan said some residents of The Standard have concerns about the project. Freker said there is “100 percent opposition” from the residents.

Freker also said there was a lack of “good faith” in negotiating the sale, as the original plan presented indicated Kieve would use the building mostly in the offseason and there would be a “low volume of usage.”

Freker said that when the current owner of the boathouse, 305 State Street LLC, became aware of the full extent of Kieve’s plans, it also became opposed to the project.

“If he could pull out of it, he would, but there’s legal liability,” Freker said.

Kieve’s use of the property would also cause a reduction in property value for residents and loss of tax revenue for the town if the boathouse becomes tax-exempt, Freker said.

Having “a camp” in the center of town would worsen parking and traffic problems in the Twin Villages, which would have a negative impact on local businesses, Freker said.

The association also has concerns about liability in the event of an accident, and questions whether Kieve’s plans for the boathouse constitute a marine use. The boathouse was built, approved, and intended for marine use only, Freker said.

Under Kieve’s plans, the primary use of the space would be for educational initiatives, meetings, and organizational functions, Freker said. 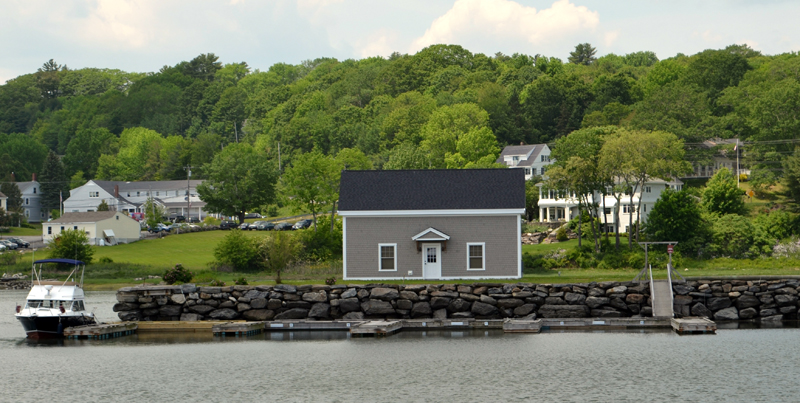 The biggest point of contention with the plan is that the condominium association must approve any structural changes to the building, which it will not do, Freker said.

“They’ve moved forward with a plan knowing 100 percent of homeowners oppose it,” Freker said. “We are all in agreement that we will not approve the renovations.”

Cervera, who owns one of the condos, said one of the reasons he was able to sell every other unit in the building was due to the privacy it affords. Kieve-Wavus’ plan would turn the property into a “full-blown camp,” he said, something the property wasn’t built for and is not prepared for.

Freker said Kieve-Wavus is an incredible organization that has been serving the community well from its camps on Damariscotta Lake. However, the plan is wrong for the homeowners, the town, and local businesses, he said.

“Kieve is doing great work, but they have a good place to do that work,” Freker said.

After thanking everyone for speaking, Selectman Ben Frey said the town does not get involved with the sale of private property.

“What I’m hearing from both sides is that you’re looking for judgment or endorsement, but that’s not our job,” Frey said. “I love that everyone came and talked about it, but the board of selectmen cannot endorse or condone the sale of private property.”

Frey said the parties could give the same information to the Newcastle Planning Board during its review of the project at its next meeting.