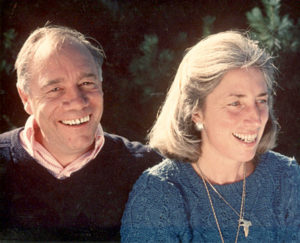 Richard “Dick” Kennedy with his wife, Nancy. Kennedy was the director of Camp Kieve in Nobleboro from 1959-1990 and oversaw its transition from a summer camp into an educational nonprofit.

Camp Kieve on Damariscotta Lake in Nobleboro is mourning the loss of its director from 1959-1990, who oversaw the camp’s transition into an educational nonprofit and developed many of its one-of-a-kind programs for families and students near and far.

Richard “Dick” Kennedy, 85, passed away in Nobleboro on June 27 surrounded by family.

Originally from Philadelphia, Dick Kennedy left a lasting impression in Lincoln County, where his family’s work dates back to the mid-1920s.

Dick Kennedy and his twin brother, Donald Kennedy Jr., were the second generation of the Kennedy family to run what was then a boys camp. Their parents, Donald and Harriet Walker Kennedy, founded the camp in 1926.

Henry Kennedy said his father and uncle ran the camp jointly in 1959 before Dick Kennedy took over the job fully in 1960.

Dick Kennedy, with his wife, Nancy Kennedy, whom he married in September 1957 in Ipswich, Mass., continued the family’s goals of fostering an unforgettable summer camp experience for children from around the world.

In 1973, he helped lead the transition of the family’s camp into an independent nonprofit organization, Kieve Affective Education Inc., now Kieve-Wavus Education Inc. He encouraged the development of new programs based on the ideals of the camp and enabled the organization to become the year-round educational institution it is today, attracting campers and counselors from all over the world.

Henry Kennedy said lessons from his father were formative in his present ability to run the camp.

“Learning from the master was awesome. There is so so much that goes into making this organization work. There are a lot of balls in the air,” Henry Kennedy said.

“He was quite a guy. I know Dick and his family have made a huge impact on the lives of thousands of kids,” Buck said.

Buck, who attended Camp Kieve as a camper for five years and worked there as a counselor for eight years, fondly remembers his time there as a youth.

“Learning from the leaders at camp, Dick and the staff, on how to conduct myself, how to work with young kids, and how to be a leader has had a huge impact on me,” Buck said.

Buck said it led to him becoming a teacher for 18 years at independent schools in Massachusetts.

Buck said he first arrived at Kieve roughly 50 years ago at the age of 9 to spend eight weeks at the camp after a bus ride from New Jersey.

He said he loved the rustic atmosphere of Kieve, where he fell in love with going on camping trips.

“All those experiences were great. I really enjoyed it and had a lot of fun. It shaped my interest in wanting to be a teacher. My fondest memories are the wonderful trips we would take in the state of Maine and the White Mountains of New Hampshire camping, rafting, and fishing,” Buck said.

Buck said his time at camp was a great opportunity to interact with a number of teachers, including Dick Kennedy.

“Dick was everybody’s mentor. He would hire other teachers to work at the camp and that led to a really big impact on campers. I credit Dick with coming up with ideas for the camp and hiring the right staff,” Buck said.

Henry Kennedy described the transition from summer camp to educational nonprofit as a decision made out of necessity at the time that turned out to be a boon for Kieve.

“It made sense to do it that way and turned out to be a great idea,” Henry Kennedy said.

Ultimately, Henry Kennedy said the move was key in making a small summer camp into a program important to thousands of people and open more than 300 days a year.

“This process, led by my father, was the only way to sustain the camp and proved to be the catalyst for what we are today,” Henry Kennedy said.

Henry Kennedy said his first year as director, 1990, was spent working with his father and was critical in his growth as executive director.

“The two of us ran it together. It was like an apprenticeship. I learned a ton of things from him, especially that this business is so much about relationships, and he introduced me to a lot of people. One of his many strengths was his fundraising ability,” Henry Kennedy said.

Henry Kennedy said the concept of family extended to the camp for his father, who appreciated the campers and staff members who have been a part of the Kieve family for multiple generations.

“It’s such an important thing, sending your kid to summer camp for the first time; it’s a big decision,” Henry Kennedy said.

Henry Kennedy described his father as an icon of the industry who penned the book “Choosing the Right Camp” in 1992, wrote several articles for Family Life Magazine, and contributed to various newspapers and magazines on the topic of education.

A spirit of volunteerism

In addition to serving as Kieve’s director, Dick Kennedy founded the Leadership Decisions Institute, now the Leadership School at Kieve, and the Science Camp for Girls.

Dick Kennedy’s impact on the community extended beyond Kieve. He was on the Maine Board of Education from 1988-1993 and served on the Governor’s Task Force on Teenage Pregnancy and Parenting, in addition to working with the New England Forestry Foundation from 2002-2010.