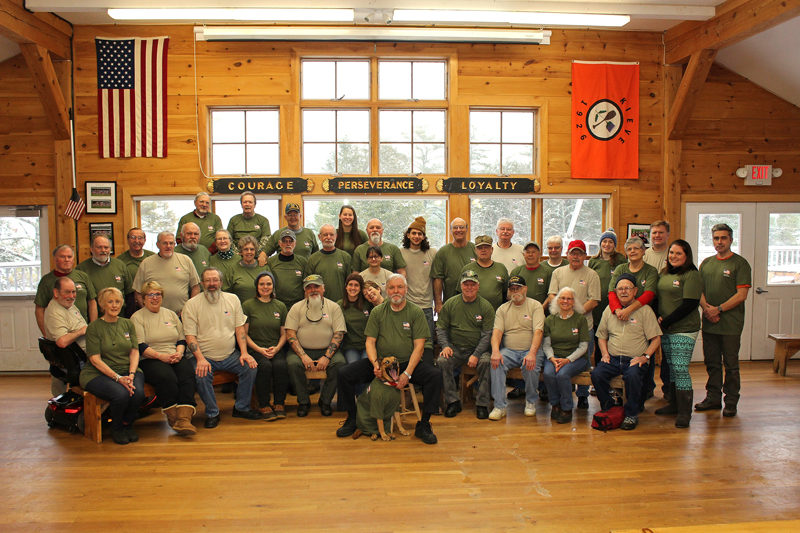 A group photo of the Vietnam War veterans who attended a week-long camp at Camp Kieve in Nobleboro Dec. 5-9, with guests and volunteers. (Photo courtesy Russ Williams)

Veterans of the Vietnam War had a chance to take part in a week-long camp in Nobleboro as Kieve-Wavus thanked veterans of the conflict for their service to the U.S.

In total, 22 veterans of the Vietnam War, with their guests, were welcomed free of charge to Camp Kieve, on the shore of Damariscotta Lake.

Through the program, Kieve-Wavus has a chance to thank veterans for their service to the nation, offering an opportunity to connect with fellow veterans while taking part in a range of activities, from card games, riflery, rock-climbing, and ziplining, to acupuncture, pottery, and cooking.

The Vietnam Veterans camp ran from Monday-Friday, Dec. 5-9, and  included Vietnam veterans from all branches of the U.S. military: the Air Force, Army, Coast Guard, Marine Corps, and Navy.

Cmdr. David Patch, a retired Naval officer and Vietnam veteran who lives in Boothbay Harbor and volunteers with veterans organizations, found out about Kieve by happenstance, driving by in his car, and was put in touch with the camp’s director by camp staff. 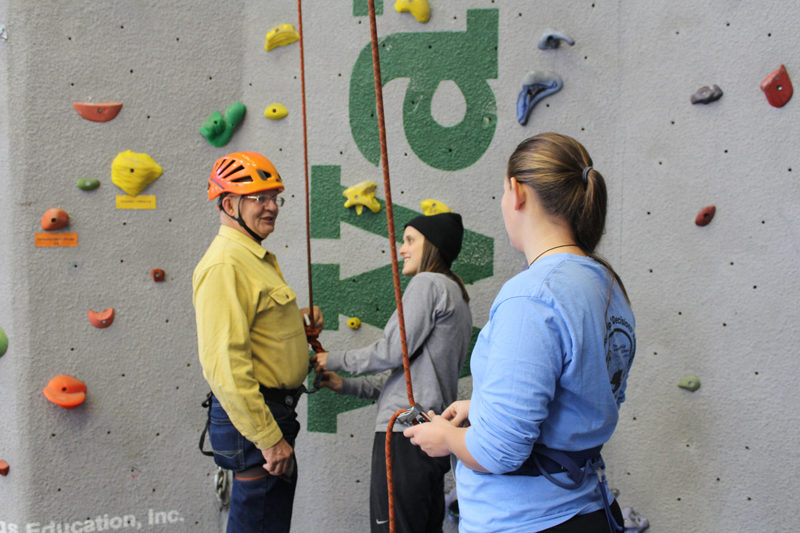 Patch said the camp’s late director, Richard Kennedy, was inspired to start programs geared toward veterans at Kieve-Wavus after encountering a group of servicemen and servicewomen returning to Bangor from Afghanistan and Iraq.

Patch said the basic idea behind the veterans camps offered by the organization is to welcome veterans home, thank them for their service, and provide them with a place to unwind.

He said that from this basis, the opportunity came about to host a camp specifically for Vietnam veterans, who went to war at a time of substantial social tumult in the U.S., when wide swathes of the public opposed the armed forces and those who served in them.

“For many veterans of the Vietnam War, this camp was the first time they were welcomed home. It’s very powerful and very meaningful. They all agreed to serve their country and did so in a time of war, one that was not popular,” Patch said.

Patch described a huge benefit of the camp as an opportunity for combat veterans of the war to come together with their fellow veterans who share a unique perspective on their experiences.

“The major thing that brings veterans here is the ability to be together and share stories with one another,” Patch said.

A place to heal

One veteran who has been coming to Kieve’s Vietnam Veterans Camp for years is Joseph “Spook” Laliberte.

Laliberte described the first time he came to the camp as a moving experience. He expressed his gratitude for all the work the camp and its staff and volunteers put in to welcome veterans like himself and to create a positive and beneficial environment.

Laliberte belongs to the Combat Veterans Motorcycle Association, which has 18,000 members across the U.S. and chapters in Germany, the U.K., and other nations. His road name, “Spook,” denotes his service as an intelligence officer. 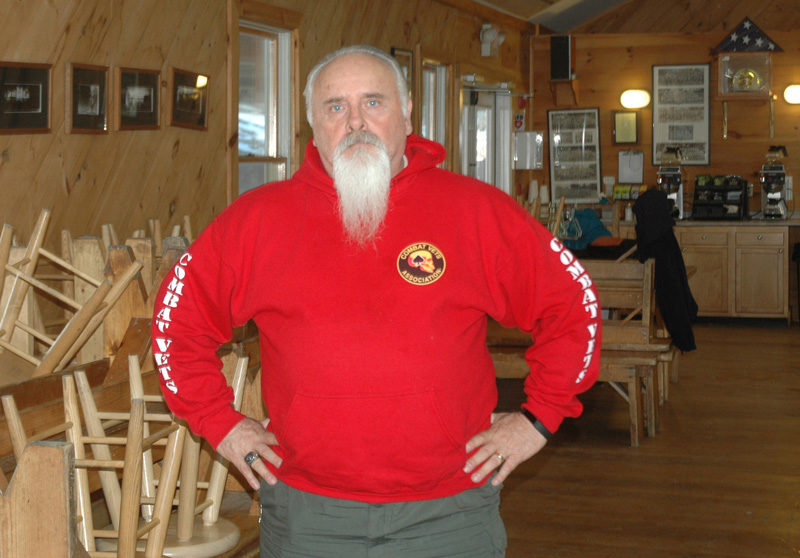 Laliberte, of Lewiston, was assigned to special operations during the Vietnam War. After the war, he worked as a federal agent in the employ of the nation’s intelligence services.

He was honest about the difficult nature of the receptions many veterans received after returning from their tours of duty during the Vietnam War.

“Many of us were disappointed at our country when we came home. I landed in California, someone spit on me, someone threw a cup of urine at me, people were calling us baby killers. Many of us cried,” Laliberte said.

Laliberte said he did not expect crowds and parades to welcome him back, but he and his fellow veterans wanted to feel welcome and reintegrate into daily life at home.

“We didn’t want cheering, we didn’t want a parade, we just wanted to be part of American society again, and it appeared at the time, they didn’t want to let us in,” Laliberte said.

Laliberte said the first time he came to Kieve, seven years ago, was when he and many of his fellow Vietnam vets got the warm welcome home they never received in the ’60s and ’70s.

He said he was blown away by the reception.

“I turned into the camp leading 100-120 bikers. When we turned the corner into camp, there were 600 or more camp residents waving flags and yelling ‘Welcome home,’” Laliberte said.

“Many of my closest colleagues and I literally cried,” he said. “We never wanted a thank you. All we wanted was a welcome home, and we didn’t get that until seven years ago. To a man, we are eternally grateful for that.”

To Laliberte, the opportunity to be with his peers, fellow combat veterans, is something he can’t thank the camp’s organizers enough for.

“The only people in my life who have thought well enough of us to bring us together is Camp Kieve,” Laliberte said.

Laliberte said his time at the camp over the years has been beneficial, helping him and prompting him to reach out and help fellow service members.

“My life has changed and I have been able to change other lives because of that,” Laliberte said.

According to a press release from Kieve-Wavus Education Inc. Development and Communications Director Russ Williams, the veterans camps started seven years ago as an opportunity for veterans and their families to relax and reconnect, in addition to a way to thank them for their service.

As part of the camp, the Maine Bureau of Veterans’ Services, represented by Deputy Director David Richmond, presented attendees with certificates of appreciation for their service.

Throughout the year, Kieve-Wavus hosts four family veterans camps at the Wavus campus in Jefferson, in addition to two veterans specialty camps in Nobleboro, the Vietnam Veterans Camp and a camp for female veterans.

All veterans camps are offered free of charge to participating veterans and family members, with funding coming from Kieve-Wavus, with support from private donations and corporate grants.