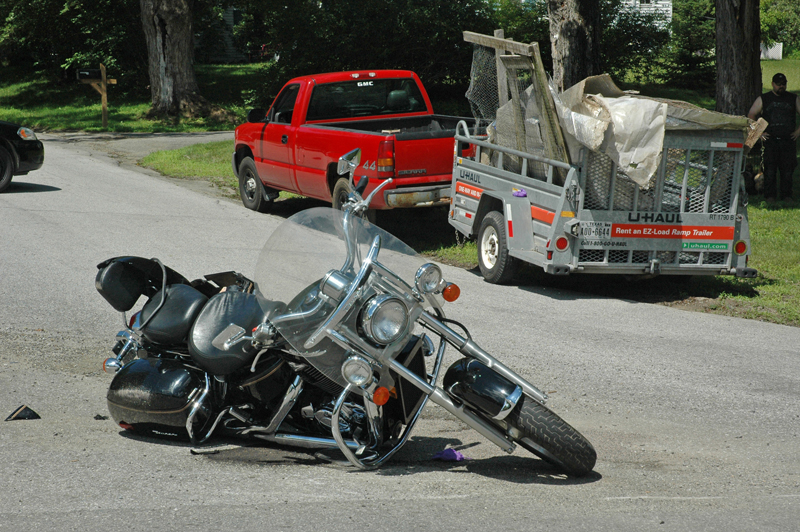 Dean Barlow, 45, of Knox, has died from injuries sustained in a July 2 collision with a pickup truck at the intersection of Old Augusta Road and Washington Road in Waldoboro. (Alexander Violo photo)

A Knox man has died from injuries sustained in a collision with a pickup truck at the intersection of Old Augusta Road and Washington Road in Waldoboro on July 2.

Dean Barlow, 45, passed away Friday, July 7, five days after the crash, according to Waldoboro Police Chief Bill Labombarde. He had sustained head injuries in the crash.

Barlow was operating a black 2000 Honda Shadow motorcycle south on Washington Road at the time of the accident, according to the Waldoboro Police Department. Chase Macioch, 29, of Warren, was driving a red 2003 GMC Sierra pickup truck west on Old Augusta Road, towing a small trailer.

The vehicles collided in the intersection. Waldoboro Police Officer Chris Spear said Macioch stopped at a stop sign before entering the intersection, but a dip in the road can make it difficult to see southbound traffic on Washington Road from the stop sign on Old Augusta Road. The town recently installed mirrors in an effort to improve safety at the intersection.

Barlow was not wearing a helmet at the time of the collision. A LifeFlight helicopter transported him to Central Maine Medical Center in Lewiston. Macioch was not hurt. There were no passengers on the motorcycle or in the truck.

The Sagadahoc County Sheriff’s Office is assisting with accident reconstruction.