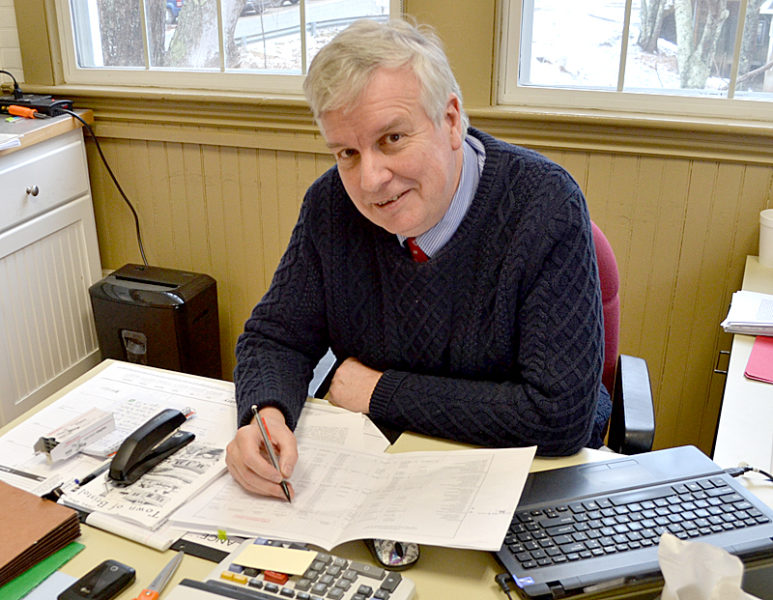 Between preparing for the annual town meeting in March, compiling the municipal budget, and attending various committee meetings, Bristol Town Administrator Christopher “Chris” Hall is “drinking from the fire hose” as he settles into his new post.

“It’s a lot to take in, for sure. I’ve definitely jumped into the deep end,” Hall said.

With his new position in municipal government, Hall adds another career to his resume. Hall has worked as an educator, businessman, politician, university president, and now a town administrator.

Hall, through his variety of professional experiences, is living out a piece of advice he gave to all of his students: be flexible.

“In teaching, I’ve always told my students they should be prepared not only to change their jobs, but also their careers,” Hall said. “You’ve got to be flexible … what you learned in your previous career should help you as you move forward.”

Born in England, Hall grew up in Coventry and spent time in New Jersey, where his father worked as a machine tool engineer. Hall first came to Maine to attend high school in Augusta as an exchange student from 1973-1974.

Hall returned to England to attend Oxford University, where he earned his bachelor’s, master’s, and doctorate degrees in international relations. He was on the faculty for three years before deciding to leave academia and pursue a business career.

Hall immigrated to America in 1980. He lived in an apartment in Portland before he and his late wife, Jacqueline “Jackie” Wardell, moved to a home in Alna.

Hall became a U.S. citizen in 1988 and moved to Bristol Mills, where he still resides, the next year.

From 1989-1995, Hall worked in the business sector, including for Thypin Steel Co. in Long Island City, N.Y., where he eventually became the company’s vice president. Each week, Hall would commute from his home in Maine to the city for work and return home on the weekends.

In 1995, the company was sold, and Hall decided to work from home in Maine. He became active in public policy and worked as a consultant in Portland. During that time, he also chaired the Maine Democratic Party.

In 2000, Hall ran for and won a seat in the Maine House of Representatives, in the former District 56, which consisted of Bremen, Bristol, Cushing, Damariscotta, Friendship, Monhegan, and South Bristol.

During his time in the House, Hall was active in environmental and transportation issues.

He decided to run for the Maine Senate in 2002, in the former District 16, which included all of Lincoln County, plus Pittston and Windsor. He served one term in the Senate before losing his re-election bid to Dana Dow, R-Waldoboro.

“This is now a true swing county. Most seats in Lincoln County can really go either way,” Hall said.

After his time in the Legislature came to a close, Hall accepted a position with the American University in Kosovo as an adjunct instructor teaching public policy. He started in September 2005. The university had opened just two years before in Prishtina, the capital of Kosovo.

Louis Sell, a former U.S. State Department official and current Whitefield resident, was a member of the university’s board of trustees at the time and helped bring Hall to Kosovo.

During Hall’s tenure in Kosovo, he witnessed history being made as Kosovo declared its independence from Serbia in February 2008.

“It was a very exciting time, to say the least,” Hall said. “To know and host a dinner at my house of all the politicians and foreign diplomats involved in setting up the country – it was very exciting to be in the middle of things like that.”

Hall returned to Maine in 2013 and spent a year as the interim president at York County Community College in Wells before returning overseas to run the International Horizons College in Dubai, a for-profit, two-year junior college.

After two years, Hall, realizing the two-year model was unfamiliar to the region and not working, recommended that the college either become a four-year school or close. The college’s board of trustees chose to close the school.

Hall oversaw the transfer of students to other universities or colleges before returning to Maine in September 2016. He was working on a book about the Balkans when he was presented the opportunity to become the president of the American University of Afghanistan.

The job would have posed a few challenges. While the American University in Kosovo was established post-conflict, the country of Afghanistan is currently in the middle of a conflict, Hall said. In addition, his partner, Abby Ingraham, would not be able to join him due to cultural and safety concerns.

Around the same time Hall was mulling the offer, the town of Bristol began its search for a new town administrator. His predecessor, Kristine Poland, had decided to step down at the end of 2016. Hall decided to apply for the job.

“After more than a decade as a college president, it was a very appealing job,” Hall said.

Hall made what he said was the “sensible” decision to turn down the position at the American University in Afghanistan to become Bristol’s new town administrator, the second in the town’s history.

Hall credited the town office staff and the selectmen for the ease of the transition. He has been sitting in on a number of committee meetings to get a feel for the topics on residents’ minds.

“The people here are very passionate, but they’re passionate about what is in the best interest of the town,” Hall said. “In any town, there will always be clashes of personality, but everyone is focused on what is best for Bristol, and that’s special.”

Looking down the road, there are some topics that might inspire townwide conversation, Hall said. The Bristol Parks and Recreation Commission plans to add a parks director to oversee the day-to-day operations of the parks, and the town is considering the future of the Bristol Mills Dam.

Hall said the topic of a full-time fire chief could be among the next conversations the town has.

As he continues to prepare for the annual town meeting in March, Hall said he is looking forward to his commute to work as the weather gets warmer. Instead of getting on an airplane to fly across the world, he only has to walk 300 yards from his home to the town office.