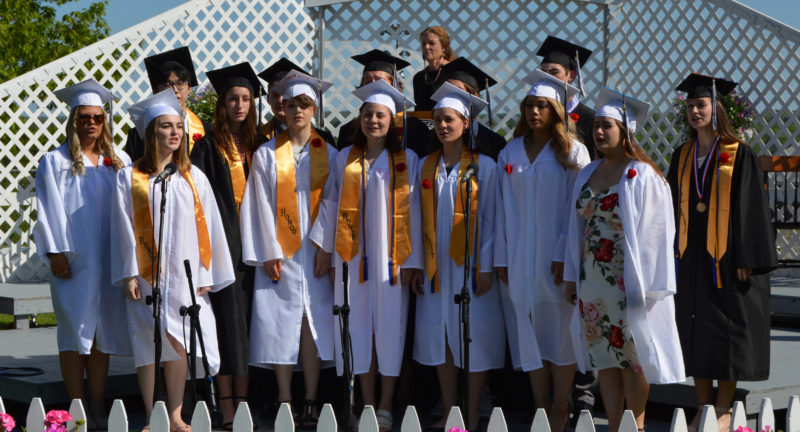 The sun was shining on the Lincoln Academy Class of 2019 for its outdoor commencement ceremony on the track field Thursday, June 6. A cool breeze, a handful of pleasant music performances by graduates, and hard-won wisdom carried the day at the school’s 141st commencement.

The ceremony kicked off at 4 p.m. with a procession of the 146-member graduating class through the open center aisle, where they brushed robes with admiring friends and family, to take their seats in the bleachers on either side of the wooden stage.

The class of 146 seniors was led by baton-wielding Class Marshals Mary Halm, who is also class president, and Samuel Russ.

Interim Head of School Nancy Starmer then took the stage to introduce the class to the crowd, which the school estimated at 2,500.

Starmer began by calling for a moment of silence in recognition of the 75th anniversary of the D-Day invasion, which marked the beginning of the end of World War II in Europe.

“Our silence is meant to honor the past, the veterans, as well as the future, the beautiful young people before us,” Starmer said.

Starmer went on to congratulate the class and detail the graduates’ accomplishments.

The national anthem was then performed a cappella by the Senior Lincolnaires Chorus.

Liang discussed how her first impression of Maine was shaped by an excerpt from a book by Sanmao, a Chinese-born author who was Liang’s favorite when she was in middle school.

In the book, a character describes Maine as “cold, lonely, and bleak.” Liang, who is originally from China, went on to say that her experience in the state, specifically at Lincoln Academy, has been very different.

“I have found Maine to be a home away from home because the hospitality, kindness, and truthfulness of the people have made this place special,” Liang said.

Liang went on to express her deep gratitude for all the help and support she received from her classmates, the faculty, and the community at large.

Following the salutatory address, graduate Rachael Schuster sang an acoustic rendition of Fleetwood Mac’s “Landslide” that she managed to make uniquely her own. Schuster was accompanied by Lucas Steinberger on acoustic guitar.

Kai-Lin Shen gave the valedictory address, outlining a brief history of exactly what it felt like to be a student at Lincoln Academy during each of her years at the school and the challenges that the future may hold for the graduates. Shen plans to attend Yale-NUS College in Singapore and study life sciences.

Shen offered encouragement to her classmates and ensured them that Lincoln Academy has equipped them “with the wings to soar” and face whatever life may throw at them.

“Embrace this confusing life, and live it. Always be curious for an answer, always thirst for an answer. Once a revelation arrives, another question will be delivered to you. The cycle will repeat,” Shen said.

Toward the end of the speech, Shen asked her fellow graduates to place their hands over their hearts and “feel the roar of life that beats underneath your palm.”

Graduates Halm, Katherine Tolley, and Kayleigh Tolley then harmonized on an a cappella version of the Beatles classic “In My Life.”

The two-hour ceremony concluded with the students switching the tassels on their caps from the right side to the left, in the traditional two-note gesture that signifies they have officially graduated.