The Wreaths Across America convoy crosses the Damariscotta-Newcastle bridge on its way to Lincoln Academy on Sunday, Dec. 8. The convoy was more than 6 miles long when it left Columbia Falls on its way to Arlington National Cemetery. (Evan Houk photo)

There was singing, dancing, and a gymnasium bursting with respect and admiration during Wreaths Across America’s first-ever convoy stop at Lincoln Academy in Newcastle on Sunday, Dec. 8.

Several hundred people, including 150 from the convoy, packed the gym at LA to receive the procession that travels from Down East Maine to Arlington National Cemetery each year to honor the nation’s veterans.

The convoy, which was over 6 miles long at its start, departed Columbia Falls on Sunday morning headed for its destination outside Washington, D.C. Other trucks split off to carry wreaths to other destinations around the country.

The participants were met by a gym full of supporters and well-wishers when they arrived for the action-packed ceremony shortly after 4 p.m. 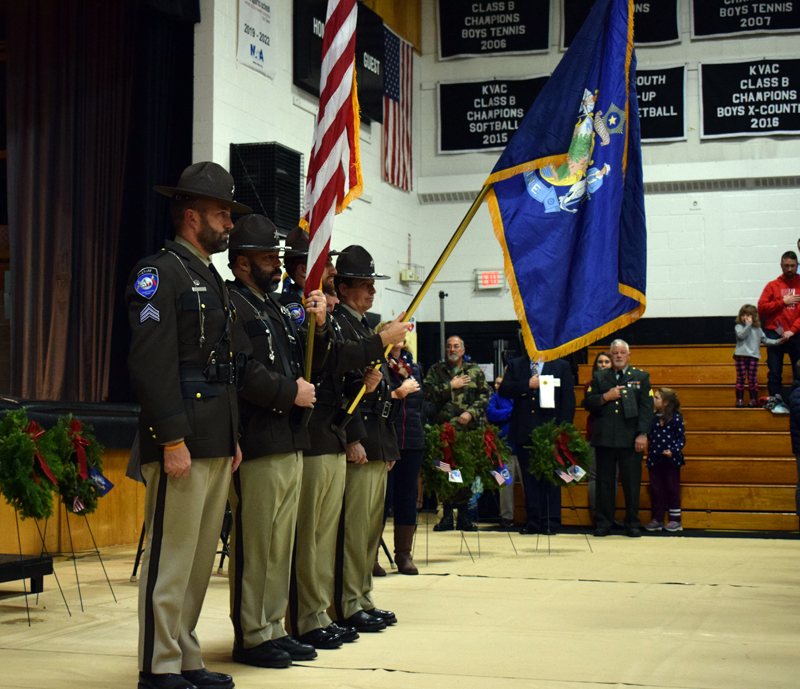 Among the entertainment was an energetic jump rope routine by the Bristol Consolidated School Air Devils, a dance performance by the Renys Rockets, a performance of “Let There Be Peace on Earth” by the Central Lincoln County YMCA’s Arts Youth Choir, and, finally, the presentation of the wreaths by LA students.

Many in attendance on Sunday were LA alumni, and they told LA staff that they were moved to be able to honor veterans on the familiar campus.

Five LA students, each the child of a veteran, presented wreaths to veterans of each of America’s wars since World War II. 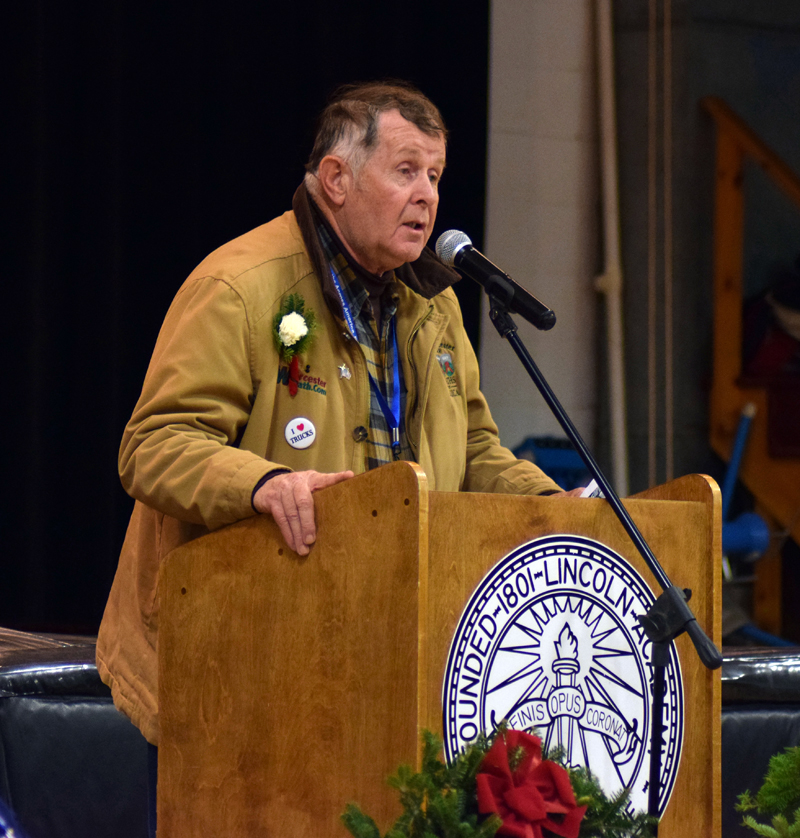 There was a special presentation of wreaths to Wayne Johnston, a Nobleboro resident and U.S. Navy veteran of Vietnam who works with Wreaths Across America, and to the family of the late LA teacher Andrew W. Williamson III, an Army veteran of Vietnam.

There was also a special presentation of a wreath to LA junior Megan Rose and her mother, Michelle. Megan Rose’s father, Army Staff Sgt. Scott Rose, was killed in action in Iraq when Megan was a baby.

“These are people who served and are also very near and dear to the hearts of people here at Lincoln Academy,” Carrigan said.

The convoy included about 50 vehicles and about 150 veterans, Gold Star families, and volunteers. They traveled in tractor-trailers, buses, fire trucks, and police cruisers, with the Patriot Guard Riders and the Patriot Riders of America escorting the convoy on motorcycles.

Don Carrigan, an LA alumnus and reporter for News Center Maine, served as master of ceremonies. 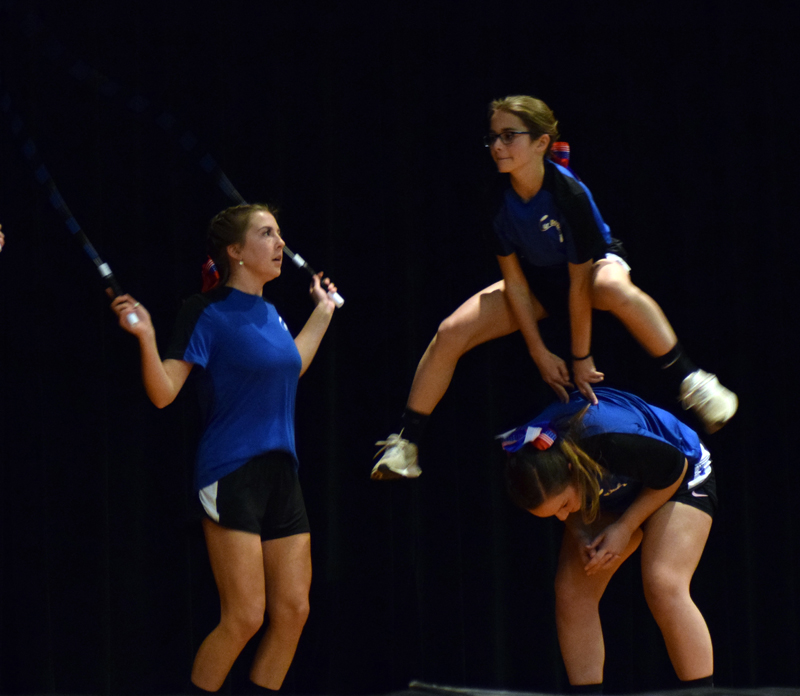 A member of the Bristol Consolidated School “Air Devils” leaps over a teammate during a routine for the Wreaths Across America ceremony at Lincoln Academy on Sunday, Dec. 8. (Evan Houk photo)

The program began with the introduction of the American Legion for its presentation of flags and the color guard from the Lincoln County Sheriff’s Office.

Wreaths Across America co-founders Karen and Morrill Worcester delivered the central message to the crowd.

The organization will send a total of 2.2 million wreaths across the country and the world this year.

The convoy will arrive at Arlington on Saturday, Dec. 14 for the deployment of the wreaths. There will also be coordinated wreath-placing ceremonies at more than 1,600 other locations.

Karen Worcester talked about what a beautiful sight it was to see families and locals lined up on the street in the frigid weather to pay their respects to the massive procession. 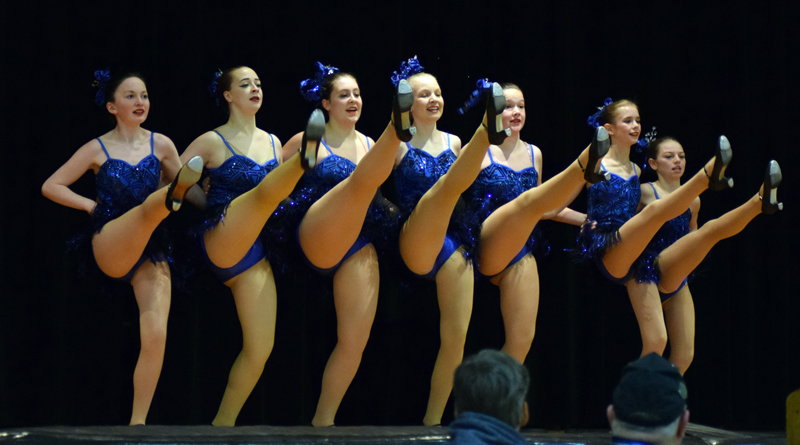 The Renys Rockets perform during a Wreaths Across America convoy stop at Lincoln Academy in Newcastle on Sunday, Dec. 8. (Evan Houk photo)

The convoy traveled through Main Street in Damariscotta and Newcastle, where folks waited on the street to wave American flags and cheer for the long line of vehicles.

According to a news release, the stated values of Wreaths Across America are to: “Remember, Honor, Teach: remember the fallen, honor those that serve and their families, and teach the next generation about the value of freedom.”

This year’s theme is “everyone plays a part.”

Karen Worcester focused on the teaching aspect of the Wreaths Across America mission in her speech.

Karen Worcester then brought to the podium the recipient of the Wreaths Across America Founder’s Award for this year, a former schoolteacher of the Worcesters, Nancy Willey, to demonstrate her lesson on the Pledge of Allegiance for everyone in attendance. 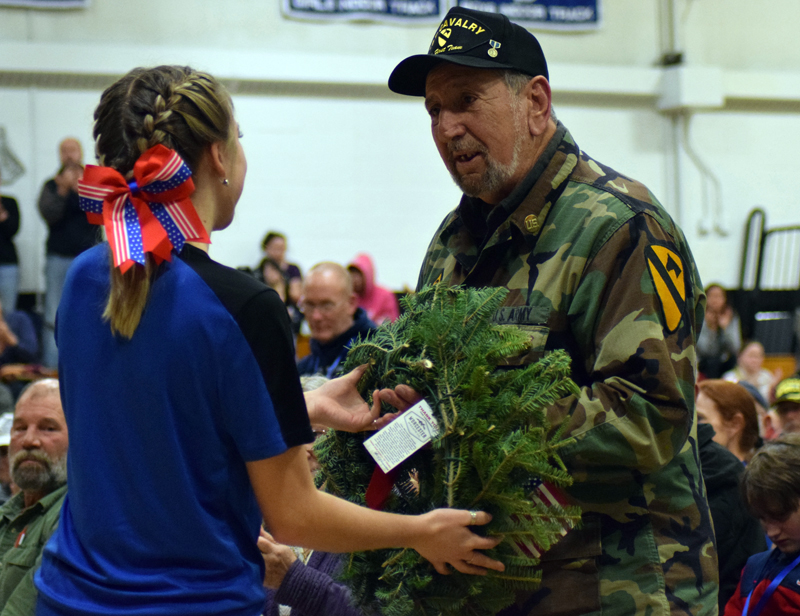 Willey talked about how Maine became the 23rd state on March 15, 1820. She counted out to the 23rd star on the U.S. flag and told the audience, just like she tells her students, to focus on that 23rd star when saying the Pledge of Allegiance.

Karen Worcester emphasized the importance of saying each fallen veteran’s name when placing wreaths at gravestones.

“But kids, especially, need to know that these are not statistics. These are lives lived, in some cases long lives, many with scars that don’t show,” she said.

Karen Worcester emphasized the importance of not taking hard-earned freedom for granted, cautioning Americans against becoming “fat, dumb, and happy.”

“You need to wave the American flag, at least in your heart, every single day. And you need to pass that on to your kids to ensure that we always have freedom,” she said. 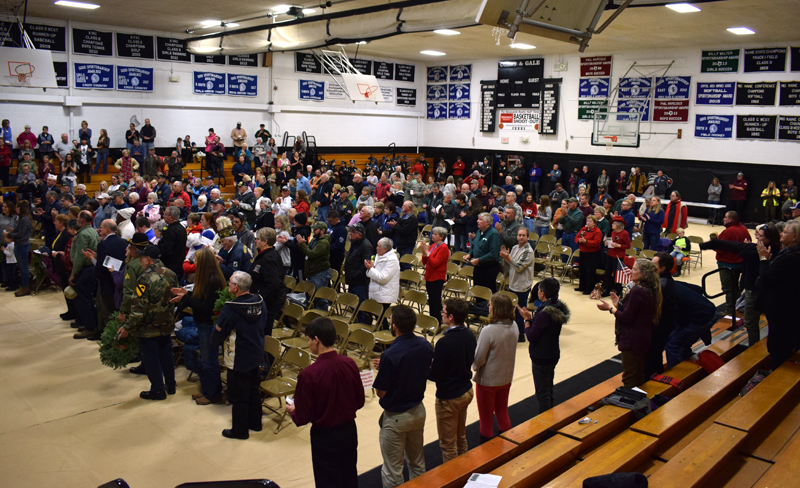 Morrill Worcester told the crowd that his ultimate goal is to eventually place a wreath on every fallen American soldier’s grave.

“Before it was just talk, but know it’s really going to happen. You watch. It’s going to take us about 12 years to reach that point,” Morrill Worcester said.

The ceremony concluded with a crowd singalong to “America the Beautiful” with the LA Lincolnaires.