Community members learned about programs and services available at Lincoln Academy during the school’s second town hall-style meeting in its Parker B. Poe Theater the evening of Tuesday, May 2.

For many years, the Lincoln Academy Board of Trustees held its annual meeting in July, but due to sparse attendance, the school decided to hold town hall-style meetings in the fall and spring. The first such meeting, in September, gave the public a look at the school’s budget, its recently completed strategic plan, and the adoption of a new, three-week May term, the Eagle Term.

The spring meeting had a slightly different format, with LA students, faculty, and staff talking about programs and other goings-on at the school. There was no question-and-answer session at the end of the meeting, but the audience could ask speakers questions after each presentation.

Cathi Howell, LA’s director of library/information services, highlighted the library’s Books and Brunch program, which is open to LA students, faculty, staff, and community members. Throughout the school year, the group reads and meets to discuss books provided by the library. Each book is accompanied by an activity, such as watching a movie based on the book.

On Tuesday, May 16, Books and Brunch will host author Phillip Hoose, who wrote the current young adult, nonfiction book the group is reading, “The Boys Who Challenged Hitler: Knud Pedersen and the Churchill Club.”

Libby Mooney, who teaches math and science, talked about the Lincoln Academy math team’s accomplishments in the past year, including winning the Maine Class B State Championship on April 4. Overall, the team placed second in all schools in the state.

Mooney, who dyed her hair blue after the math team won the Central Maine Math League regional championship, said she agreed to have the names of the math team temporarily tattooed on her arm with henna, although she hasn’t gotten around to it yet. 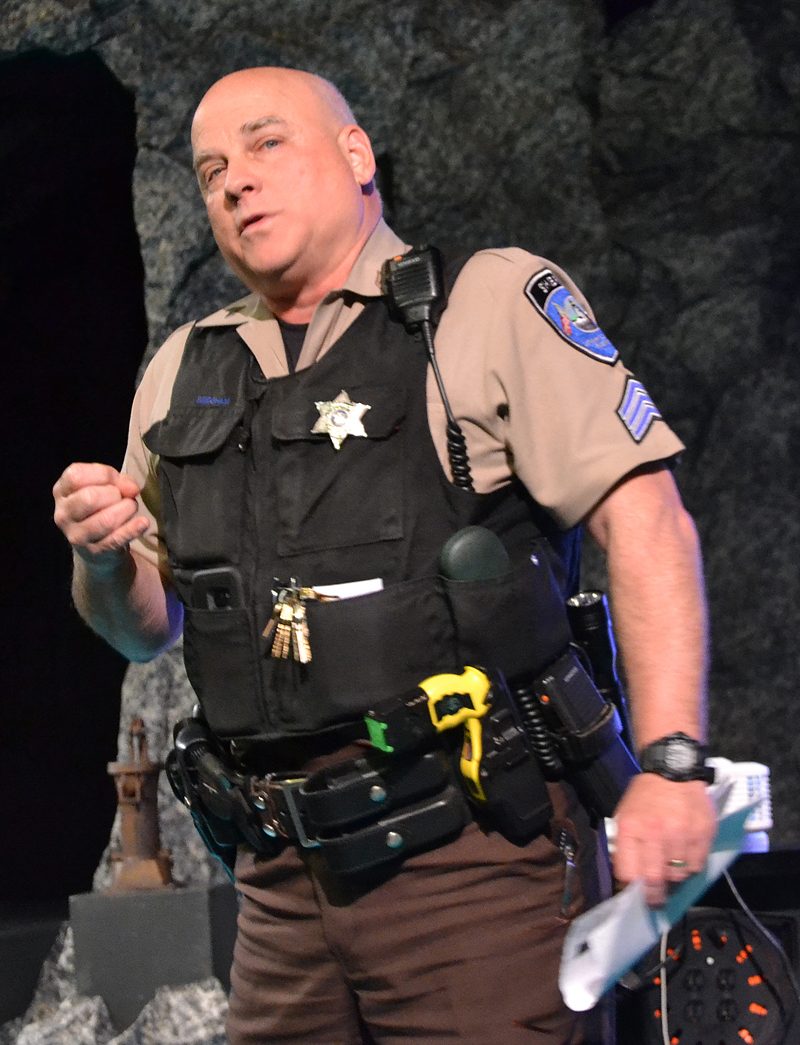 Lincoln Academy School Resource Officer Mark Bridgham talks about his experience at LA over the past 13 years. Bridgham’s tenure as school resource officer will come to an end at the end of the school year due to his promotion to sergeant. (Maia Zewert photo)

Dean of Students and dorm parent Jake Abbott and LA senior Kaden Pendleton spoke about the freshman mentorship program at the school, which pairs sophomores, juniors, and seniors with freshman adviser groups. The program gives freshmen a “familiar face” in the halls of Lincoln Academy and creates a safe space in which students can talk about everything from superpowers to suicide, Pendleton said.

Pendleton later returned to the stage to talk about the Lincoln Area Community Fundraising Organization. The group, established in summer 2016, raises funds for Lincoln County nonprofits. In the past year, the club raised $3,000 for nine local nonprofits through various fundraisers, including bake sales and wreath sales.

Maya Crosby, director of innovation and technology, and LA junior Chris Dennis talked about programs at the Cable-Burns Applied Technology and Engineering Center, including LA’s Community Hour of Code and the Lincoln Academy FEX Robotics tournament in February.

Director of Special Education Laurie Zimmerli spoke about the changes coming to the department in the upcoming year, including expanding the alternative education program to freshmen and sophomores and the addition of a new learning center to meet the needs of all students.

Ken Stevenson, director of resident life, had some of the boarding students talk about their favorite things about staying with local families over February and April breaks. Answers ranged from becoming more familiar with American culture to eating Nutella.

Liz and Mike Hall, who hosted two of the international students, spoke of their “incredible” experience and encouraged others in the audience to volunteer to host students.

Lincoln County Sheriff’s Office Sgt. Mark Bridgham, LA’s school resource officer, thanked the community for his experience at the school over the past 13 years. With his recent promotion to sergeant, Bridgham will leave LA at the end of the school year. Deputy Chad Gilbert will take over the role of the school’s resource officer.

Bridgham said he will impart to Gilbert the importance of always having an open door to students, faculty, staff, and community members.

“We’re another resource for you,” Bridgham said. “What we do here at Lincoln Academy is very important, and the only way we can be as successful as we can is when we work with the community.”

LA will hold another town hall-style meeting in the fall, according to Head of School David Sturdevant.