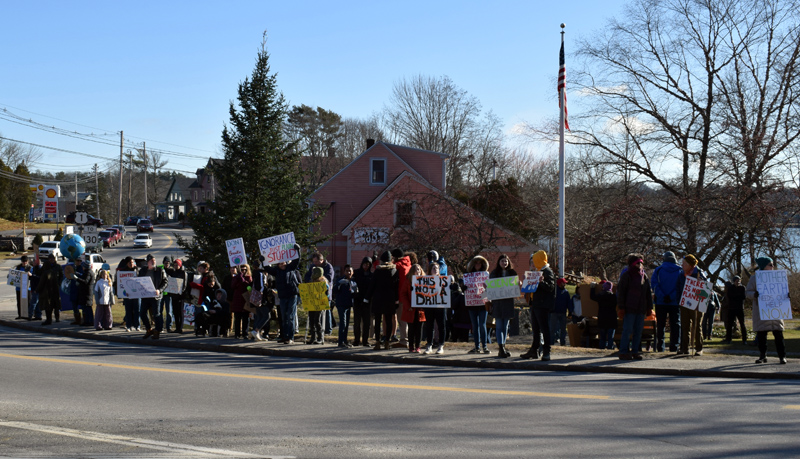 The Lincoln Academy Climate Action Club asked the Newcastle Board of Selectmen to pass a “climate emergency resolution” this week but the selectmen declined, saying they do not have the authority to pass a resolution on behalf of the town.

The mission of the rally was to raise awareness about climate change and push for the passage of the resolution.

The resolution would declare a climate emergency in Newcastle. It calls for “a set of bold policy responses that will in 10 years bring an end to the era of fossil fuels.” The document also calls for “immediate emergency funding” to implement these new policies.

At their Dec. 2 meeting, the selectmen said the club would need to circulate a petition and collect the necessary number of signatures – 10% of the votes cast in the last gubernatorial election – from registered Newcastle voters in order to put the resolution to a vote at annual town meeting in June.

Town Administrator Jon Duke believes the number to be around 118.

Selectmen Brian Foote and Carolyn Hatch were absent from the meeting.

Board Chair Ben Frey said the selectmen could vote to add the resolution to the warrant, but he would prefer the petition route.

“We don’t have the authority, as selectmen, to pass these resolutions. We have to put it to the town and ask them to do it,” Frey said.

The selectmen are “agnostic” about resolutions and Frey would rather see “interested parties actually put forth the effort to go and seek signatures and then bring it to the town,” he said. 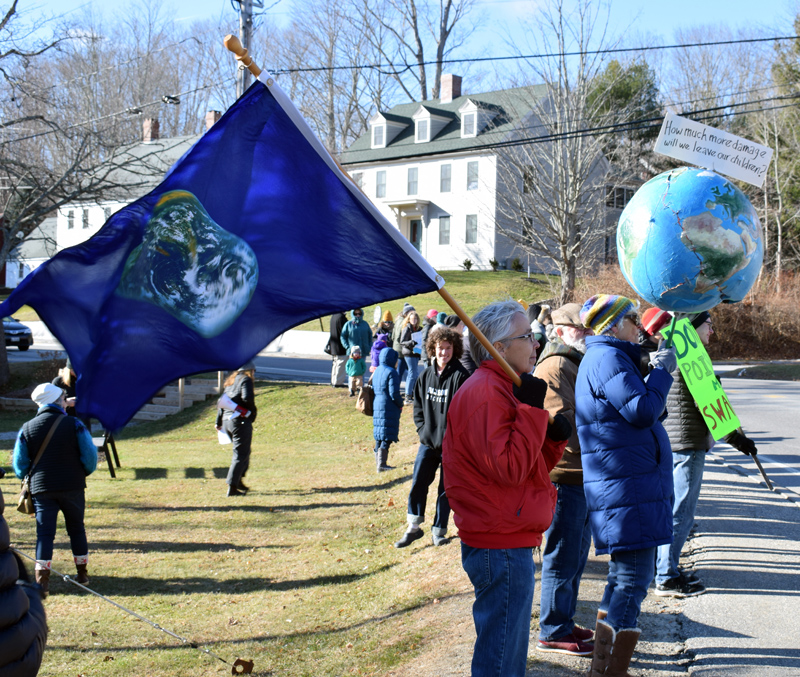 Riley Stevenson and Jojo Martin, members of the Climate Action Club and organizers of the rally, addressed the selectmen and stressed the urgency of the climate crisis.

“I think it’s probably not controversial to say that the climate crisis is the biggest thing our generation is going to have to deal with. So, just even starting small, everything helps,” Martin said.

Stevenson talked about the resolution’s intent to spur action in government at all levels to combat climate change.

“One of the things that is really great about this resolution is that it is very vague about how these goals will be achieved, but it’s very specific in the goals that it sets out,” Stevenson said.

Approximately 90 people braved the frigid temperatures and gusting wind to attend the rally along Main Street on Friday, chanting and waving signs at passing cars.

Over half of the vehicles passing by gave a beep or two of support, while at least one driver of a heavy-duty pickup truck revved the engine in apparent disapproval.

According to The Climate Mobilization, which pushes to mobilize policymakers and pass climate emergency resolutions, “over 1,210 local governments in 26 countries have declared a climate emergency and committed to action to drive down emissions at emergency speed.”

The resolution presented to the selectmen seeks to address the problem of climate change and the greenhouse gas emissions that contribute to it.

Stevenson read a draft of the resolution to the crowd at the rally. 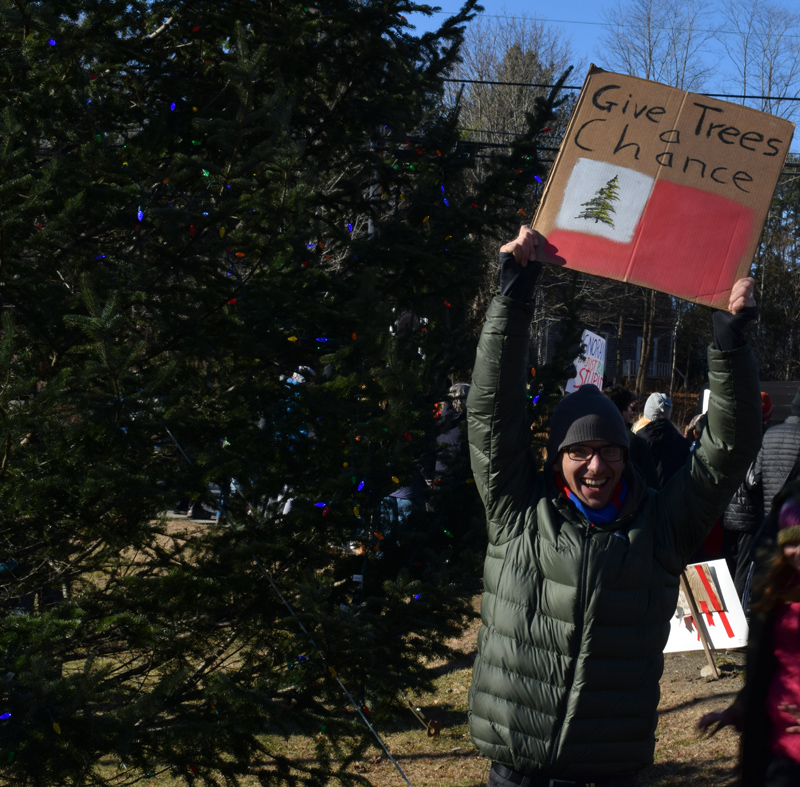 Mike Lee, of Damariscotta, holds up a homemade sign with the message “Give trees a chance” during a climate change rally at Veterans Memorial Park in Newcastle on Friday, Nov. 29. (Evan Houk photo)

The resolution cites an October 2018 report by the United Nations’ Intergovernmental Panel on Climate Change, which states that global carbon emissions must be cut in half by 2030 in order to limit global warming to an increase of 1.5 degrees Celsius above preindustrial levels.

The climate strike coincided with a similar strike in York. Both were supported by the Maine chapter of the national group Youth Climate Strikes. Stevenson is coordination director for the Maine chapter.

The chapter will support additional events in Brunswick and Portland on Friday, Dec. 6. Its goal for the Portland strike is to pressure Gov. Janet Mills to declare a climate emergency in the state.

According to NASA, climate change refers to the overall warming of Earth’s climate, which is causing a decline in Arctic sea ice, global sea level rise, and a greater frequency of record-high temperatures and intense rainfall events.

NASA states on its website that: “Ninety-seven percent of climate scientists agree that climate-warming trends over the past century are extremely likely due to human activities, and most of the leading scientific organizations worldwide have issued public statements endorsing this position.”

These human activities include the burning of fossil fuels, such as coal and oil, which releases greenhouse gases, like carbon dioxide, that become trapped in Earth’s atmosphere. NASA states that there is “no question that increased levels of greenhouse gases must cause the Earth to warm in response.” 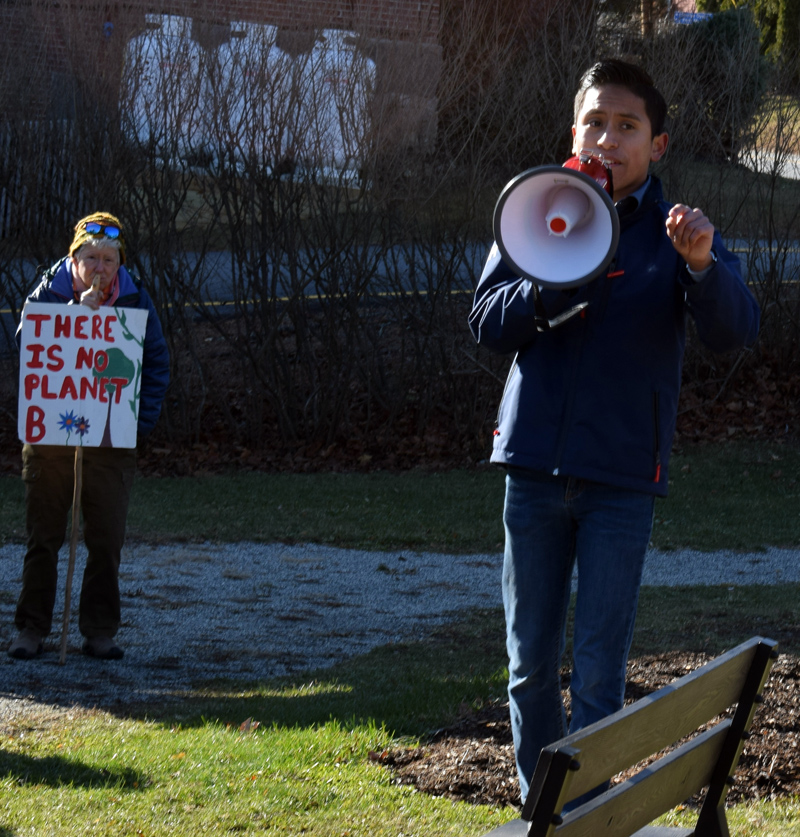 The student organizers led the crowd, including many people brandishing homemade signs, in several different chants with the aid of a megaphone. Some of the chants were “No more coal, no more oil, keep the carbon in the soil!” and “Save our rock!”

Martin, a member of the Climate Action Club throughout his four years of high school, told the crowd that 35 students showed up to the last meeting of the group, the most he has ever seen at a meeting.

He said LA Head of School Jeffrey Burroughs dropped into a club meeting and assured the students that his administration intends to move the school in a more sustainable direction.

In a statement, Burroughs said the school will look into ways to reduce its energy use and waste production in the coming year.

“In this case, what is good for the planet is also good for our bottom line: reducing energy costs and producing less trash is a win-win. I look forward to partnering with the Climate Action Club in these conversations. Student voices will be an important part of the discussion moving forward,” Burroughs said.

LA student Cameron Nelson shouted to the crowd through a megaphone that the effects of a warming planet are already visible and time is running out to mitigate the worst effects of man-made climate change.

The World Health Organization also reports that between 2030 and 2050, “climate change is expected to cause 250,000 additional deaths per year, from malnutrition, malaria, diarrhea and heat stress.” 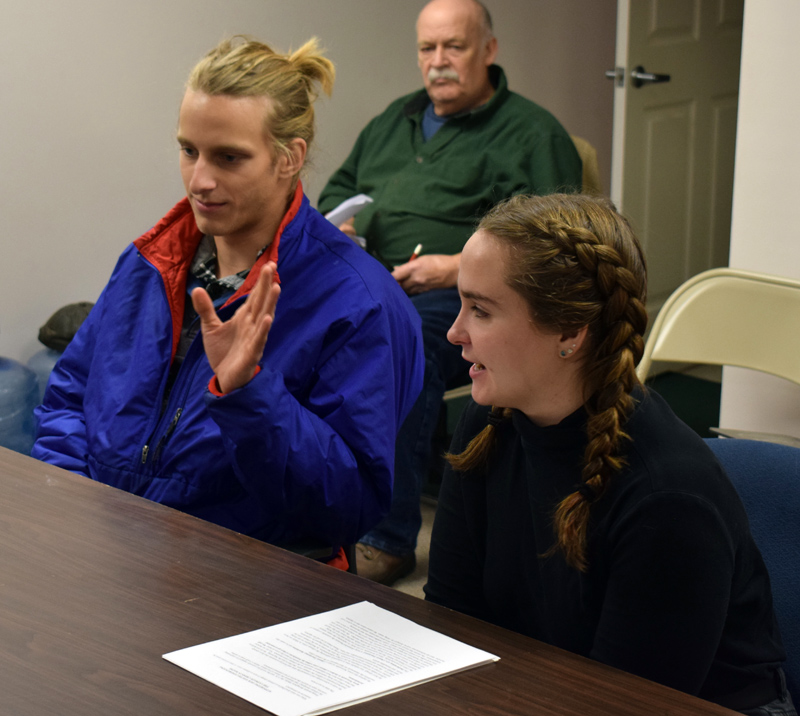 Jojo Martin and Riley Stevenson, of the Lincoln Academy Climate Action Club, present a climate emergency resolution to the Newcastle Board of Selectmen on Monday, Dec. 2. (Evan Houk photo)

“We must fight for climate justice by tackling income inequality and corporate greed, and we’re here to remind all elected representatives that their job is to represent us, their constituents, and not their corporate donors. This is about a recommitment to the values of democracy,” Nelson said to cheers and applause.

Three days later, at the selectmen’s meeting, Martin said climate change is an issue that hits close to home, as the Gulf of Maine is the second-fastest-warming part of the world’s oceans.

Selectman Joel Lind said he would be willing to work with the Climate Action Club and the town to help devise ways to increase energy efficiency.

He said there are a lot of opportunities to do this in municipal buildings, like replacing old furnaces with more efficient units or adding solar panels.

“There’s a lot of legwork that needs to be done and we’re a very short-staffed town. … There’s a lot of stuff that we actually need help with,” Lind said, inviting the Climate Action Club to help with the legwork.

Lind, a building contractor, said he plans to use his new infrared tool to identify spots in town buildings where heat is escaping.

“As long as I’m on this board, I’m ready and willing to help work with you guys and work with the town to do this stuff. But we do need some smart young people to help out with this,” Lind said.

He suggested that the Climate Action Club draw up a presentation with some potential strategies or solutions to show to voters at annual town meeting in June, should the club follow through with the petition.