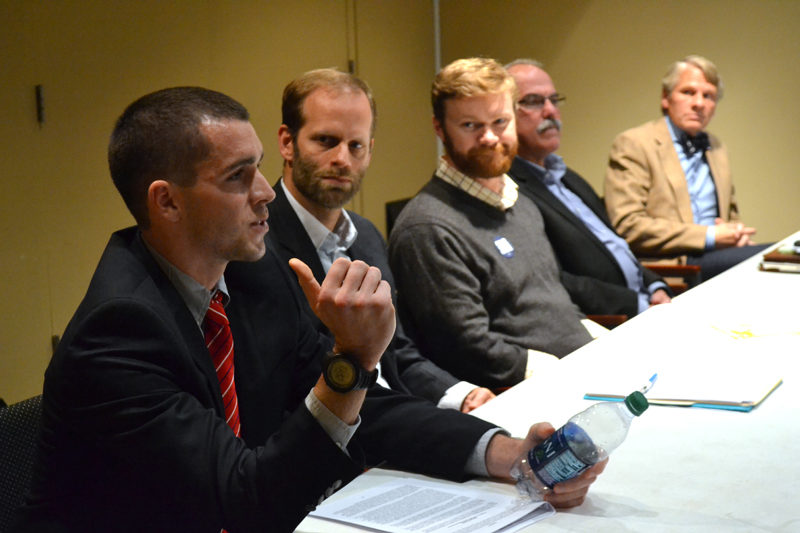 From left: Finn Melanson, a volunteer with the League of Women Voters, talks about Question 5 during a forum at Skidompha Library on Thursday, Nov. 3, while fellow panelists Garrett Martin, Will Ikard, Greg Dugal, and Marcus Hutchins look on. Lincoln Academy students hosted the forum about Questions 2, 4, and 5. (Maia Zewert photo)

Local residents crowded into the Porter Meeting Hall at Skidompha Public Library on Thursday, Nov. 3, to learn about three of the five ballot initiatives Maine voters will consider on Election Day.

Lincoln Academy students in AP macroeconomics and U.S. government and politics classes hosted the forum, which provided information about Questions 2, 4, and 5.

Question 2 would establish a 3 percent tax on household income over $200,000. Funds raised through the tax would provide support for K-12 public education.

Question 4 would raise the minimum hourly wage from its current $7.50 to $9 in 2017 and by $1 each year thereafter until it reaches $12 in 2020, with annual cost-of-living increases to follow. Service workers who receive tips would see an increase to $5 per hour in 2017 and an annual $1 increase until their wage reaches the adjusted minimum wage.

Groups of students introduced each question, then provided arguments for and against the ballot measure. 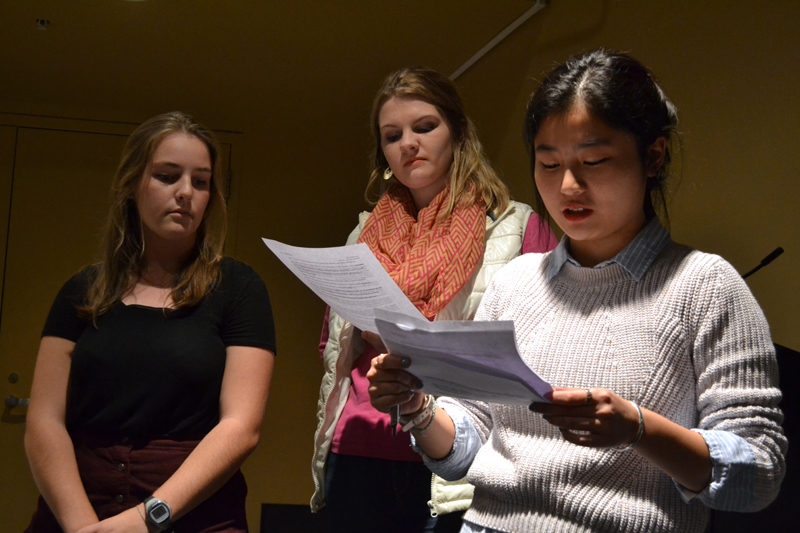 From left: Lincoln Academy students Anna Sirois, Bailey Plourde, and Hindley Wenjia Wang discuss Question 2 during a forum on the referendum questions at Skidompha Library in Damariscotta on Thursday, Nov. 3. LA students explained and presented arguments for and against Questions 2, 4, and 5, before turning the discussion over to a panel. (Maia Zewert photo)

After the students’ presentation, the discussion was turned over to a guest panel of advocates and experts on Questions 2, 4, and 5.

Garrett Martin, the executive director of the Maine Center for Economic Policy, helped develop the language and submitted the petition for Question 2. Martin, who lives in Newcastle and coaches cross-country at LA, said the initiative would provide a funding mechanism for the state to fund 55 percent of the cost of K-12 public education. Voters approved a measure directing the state to do so in 2004.

“The initial fiscal calculations of this was that it would raise somewhere around $150 million to $160 million, and it turns out that is almost exactly the amount the state is short on hitting that threshold,” Martin said. “It certainly has the potential to get us to that margin.”

“This 3 percent tax added on to incomes over $200,000 does nudge the overall tax system toward a much less regressive system. It’s hard to imagine that if we move closer to fairness, we damage our society,” Hutchins said.

“We’re looking at this in a statewide sense,” Dugal said. “The rim counties of Washington, Aroostook, Piscataquis, and Somerset are not Lincoln County, and they’re certainly not Portland, Maine. A lot of people in those counties are unable to pay employees the $12. I was speaking to a restaurant owner in Aroostook, and they pay their best cook $10 an hour, and that’s what they can afford.”

Will Ikard, a Newcastle resident and director of the Maine Small Business Coalition, said Question 4 would have a positive impact on more than 180,000 Mainers who are working full time for minimum wage and cannot support themselves. In addition, many Maine businesses are already paying more than the current minimum wage, Ikard said.

“The average Maine retail business wouldn’t even be affected by our referendum because they’re already doing the right thing by their employees,” Ikard said. “We want to make them more competitive and give them a better chance against the national chains that are paying the poverty wages.”

Finn Melanson, a volunteer with the League of Women Voters, explained how ranked-choice voting would impact elections in a variety of ways, including how voters are able to express their preferences and how candidates campaign for office.

Maine has a rich tradition of having more than two candidates campaign for office, one that is unlikely to end in the foreseeable future, Melanson said.

“We’re going to continue to have elections where you have more than two competitive candidates,” Melanson said. “The central question that you as a voter have to resolve is whether our current system does a good job of representing that reality, and do you have an adequate expression of voter preference in elections with more than two candidates running?”

Throughout the forum, members of the audience had the chance to ask questions of the panelists and express their own opinions about the referendum questions.