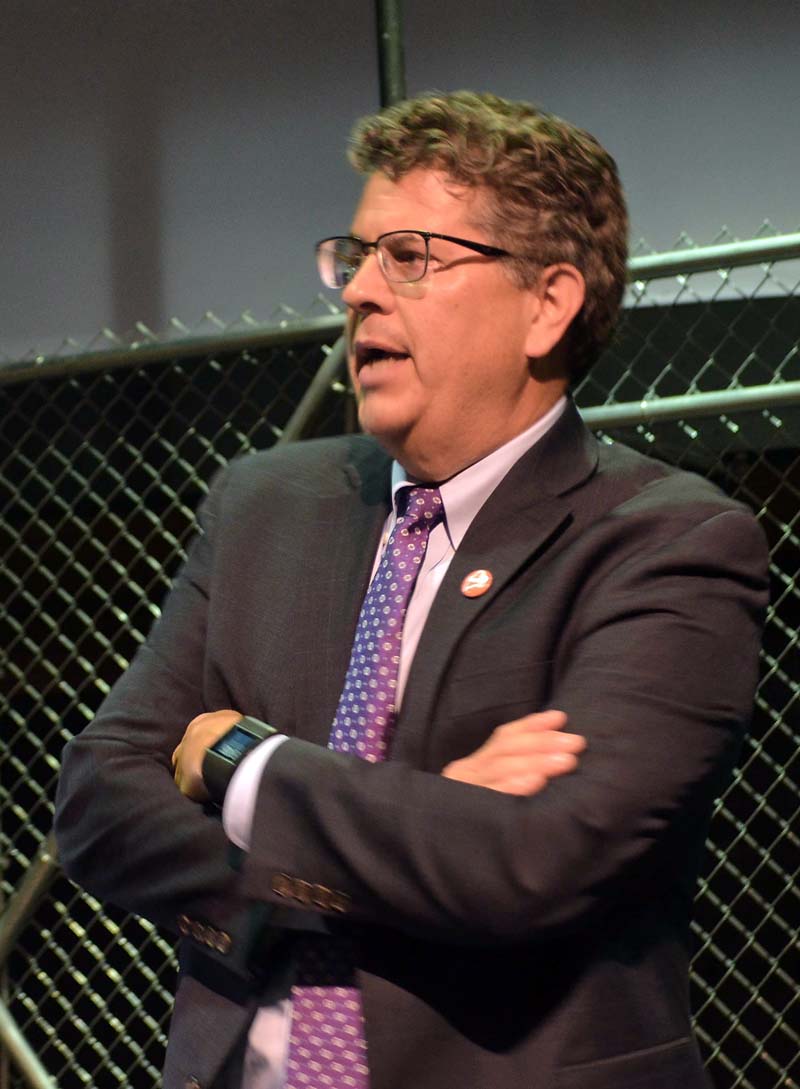 Lincoln Academy answered questions about its finances and gave an update on the campus master plan during a town hall-style meeting at Parker B. Poe Theater in Newcastle on Wednesday, Sept. 20.

The town hall format is one of the ways the school hopes to better communicate with the community, according to Head of School David Sturdevant. For many years, the Lincoln Academy Board of Trustees would hold an annual meeting in July. The meetings were open to the public, but sparsely attended.

The school introduced the new town hall format last September. In the new format, LA officials presented on goings-on at the academy and took questions from the audience. A similar meeting took place in May 2017.

During the Sept. 20 meeting, LA Board of Trustees President Chrissy Wajer said the purpose of the meeting was to share more information with the public.

“We heard the questions and concerns based on the need for increased communication, and we’ve made it one of our priorities to improve communication between the board and the community,” Wajer said.

After an overview of the school’s enrollment, faculty, and staff by Sturdevant and a presentation on students’ plans after graduation by Director of Counseling and Studies Sarah Wills-Viega, Chief Financial Officer Helen Telfer spoke about the academy’s finances.

In the course of the budget year, Lincoln Academy is expected to take in $9,905,594 in revenue, including $156,627 from earnings on the school’s endowment, to cover expenses. Barring any unforeseen changes, the school is expected to end the budget cycle with a surplus of $19,037, Telfer said.

Tuition from both day and boarding students makes up approximately 80 percent of LA’s revenues, Telfer said. Other sources include the school’s Lincoln Fund, revenue from summer programs, and other programming funds.

In response to a question from Newcastle resident Dennis Anderson about how the budget is different from the budget originally approved by the board, Telfer said the school chose not to fill some faculty positions and increased summer revenue capabilities.

Citing a June article from The Lincoln County News about differing views of the school’s finances, LA alumnus Bill Card expressed concern about the school exceeding its annual budget by approximately $1.14 million over the past five years.

As a father of two boys currently at Great Salt Bay Community School in Damariscotta whom he would like to attend LA one day, Card asked what practices had changed to allow the school to likely end the 2017-2018 fiscal year with a surplus.

Sturdevant said the school “has made a lot of budget adjustments” recently. 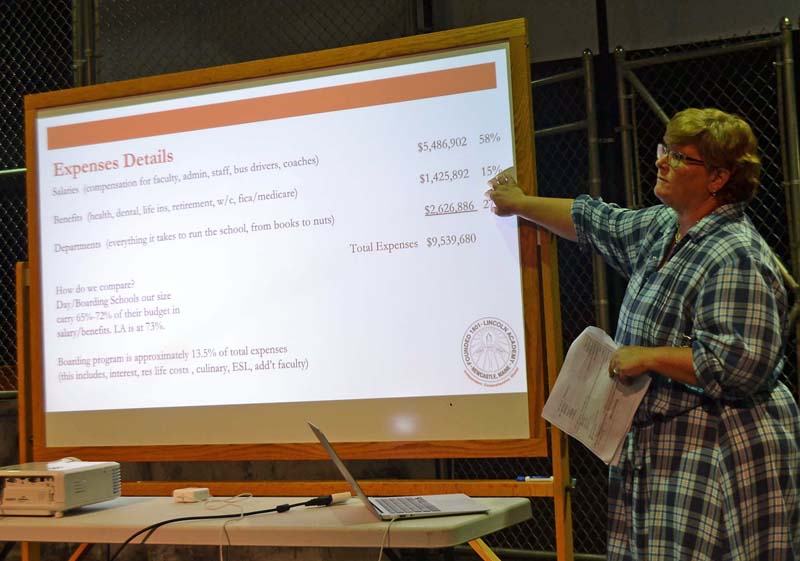 “I think part of it is the fact that there’s been a lot of growth and development, and these new projects take a while to get going,” Sturdevant said. “Now that we’re in the transition, I think it has turned around.”

Lincoln Academy Associate Head for External Affairs Matt Goetting gave an overview of the school’s recently completed campus master plan, a component of its strategic plan. Among the priorities identified in the campus master plan are a new performing arts facility and the improvement of existing space, a topic that has surfaced during both of the previous town halls.

Other planned improvements include creating a learning commons for students and improving traffic flow in and around the campus, Goetting said.

Card asked how much the school anticipates it would incur in additional debt for the capital improvements.

Sturdevant and Goetting said the projects would be fully funded without increasing the school’s debt.

“I think there’s a desire to have all funds raised before putting a shovel in the ground,” Goetting said. 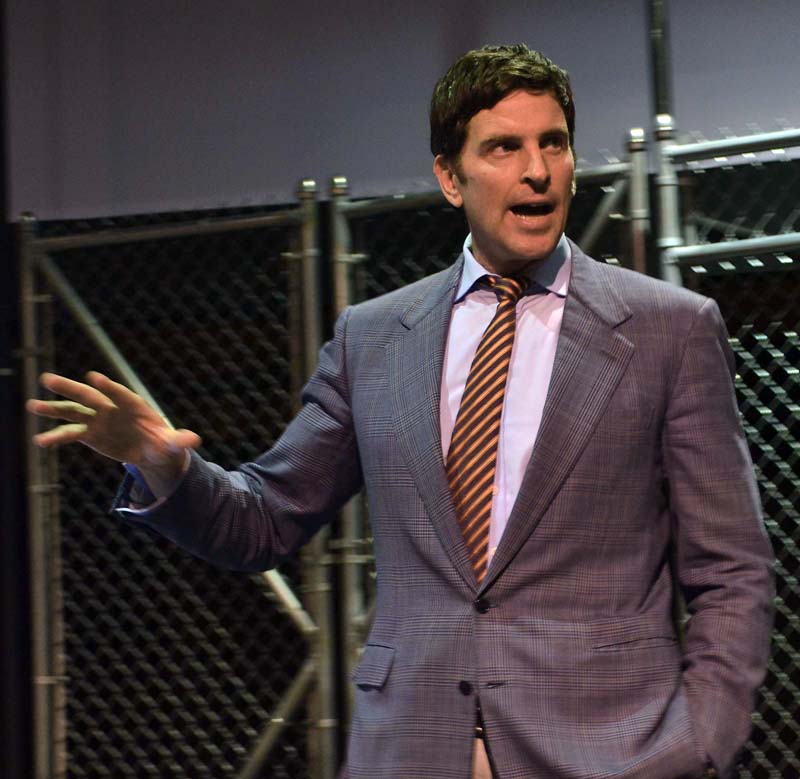 Toward the close of the meeting, Sturdevant gave an update on Eagle Term, the school’s three-week May term introduced last year.

The program “created a lot of conversation” within the school community, but was well-received by students, faculty, and staff, Sturdevant said.

Some adjustments will be made to the term for the upcoming year, including requiring a signed permission slip from parents for a student’s choice of class and moving away from some “weather-dependent” courses, Sturdevant said.

Eagle Term has been a topic of discussion in many of the Lincoln Academy Parent Association meetings, according to association member Stephanie Nelson. She asked Sturdevant if any of the feedback from parents, including possibly decreasing the number of days of the term, would result in changes to this year’s program.

Sturdevant said he had not sat down with the faculty yet, but the plan is to keep the same number of days.

Nelson said the decision was “disheartening” given how much time the Eagle Term takes away from regular instruction and the impact the timing has on finals.

At the close of the meeting, Sturdevant welcomed anyone with questions or concerns to contact him.