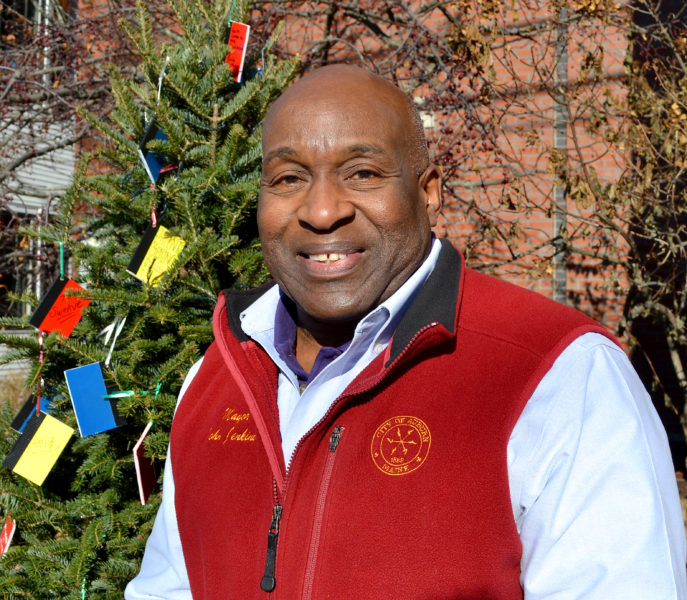 Lincoln Academy teacher John Jenkins has taken a leave of absence from the school to run for governor in 2018.

A former mayor of both Lewiston and Auburn and a former state senator, Jenkins, of Auburn, comes from “a working-class background,” he said. While growing up in “gang-infested” Newark, N.J., he was the president of the student council at his high school and introduced Martin Luther King Jr. before a school assembly.

After high school, Jenkins attended Bates College in Lewiston and graduated with a degree in psychology in 1974.

From 1993-1997, Jenkins served as the mayor of Lewiston. A decade later, in 2007, he ran a successful write-in campaign to become the mayor of Auburn.

In 1996, Jenkins, running as a Democrat, won election to the Maine Senate, where he served a single two-year term.

Most recently, Jenkins has taught several courses at Lincoln Academy, including martial arts and the World of Work program. This summer, before Jenkins began his third year of teaching, he sat down with Head of School David Sturdevant to discuss his possible run for governor.

“We had a good, long conversation about it, and decided I would take a leave of absence,” Jenkins said. “I could have stayed on and taught while also running, but that wouldn’t be fair to either the kids or the people. Maine is a big state, and you can’t run for governor part-time.”

Sturdevant described Jenkins as a valued member of the Lincoln Academy faculty.

“John brings a wealth of experience, enthusiasm, and positive energy to our community, and he significantly impacts students in many ways,” Sturdevant said in an email response to a request for comment. “We expect that John will be on campus at various times during this school year to interact with students about Maine politics, important issues, and his campaign.”

This is Jenkins’ second campaign for the Blaine House. He launched the first, a 2010 write-in campaign, just eight weeks before the election.

This time, he joins a crowded gubernatorial race with 25 declared candidates.

Jenkins, who filed as an independent, is running a “people’s campaign” for the state’s highest office, inspired by the people who asked him to run for office in the first place.

“Back when I was mayor of Lewiston and Auburn, people kept asking me to think about it, so I did,” Jenkins said. “I think it’s always been a possibility.”

Jenkins felt inspired to run for governor this year, however, due in part to the “sense of unrest” in government today. He compared the feeling to that of an artist who uses his work to express himself.

“If I were a sculptor, I would be creating works that spoke to this feeling of anxiety I have, as many people do,” Jenkins said. “But I’m a public servant, and my skills are in building community and pulling people together, and perhaps that’s what the state needs right now.”

Jenkins is traveling to different parts of the state “almost daily” to speak with people.

“It’s imperative to go to the people and meet and talk with them, no matter where they are,” Jenkins said. “I’m not just hitting the big population centers, because we can’t forget about our brothers and sisters in the most rural parts of the state.”

While he said that not every part of the state has the same concerns, Jenkins has noticed a few prevailing anxieties among many of Maine’s people while on his listening tour.

“Health care, homelessness, hunger, opioid addiction, and work – those are the big ones,” Jenkins said. “But the thing is, most all of those I’ve worked on in some way or another when I was mayor or in the state Senate, or at Lincoln. Now it’s about working together to find a solution and a statewide vision that can have local solutions.”

In addition to his listening tour, Jenkins is working to get his name on the ballot for November. As an independent candidate, he will need at least 3,500 certified signatures from Maine voters to appear on the ballot.

“Right now we’re building volunteer bases around the state, and we want to gather signatures in every county,” Jenkins said. “All I’m asking for is a chance to get on the ballot and to give people a choice.”

Since he registered as a candidate with the Maine Commission on Governmental Ethics and Election Practices in November, the Facebook page for Jenkins’ campaign has garnered over 2,000 likes and received many positive comments.

“When you look at our Facebook page and see what the people are saying … it tells me we are on track with our assessment that people want a pragmatic governor. They want someone who will tell the truth,” Jenkins said. “And you can take my words with a grain of salt, but when you look at my record, you’ll see I follow through with what I say. What I’ve done in the past is what I’m going to do as governor. It’s that simple.”

For more information about Jenkins’ campaign, go to jenkinsforgovernor.org or find the campaign’s Facebook page.