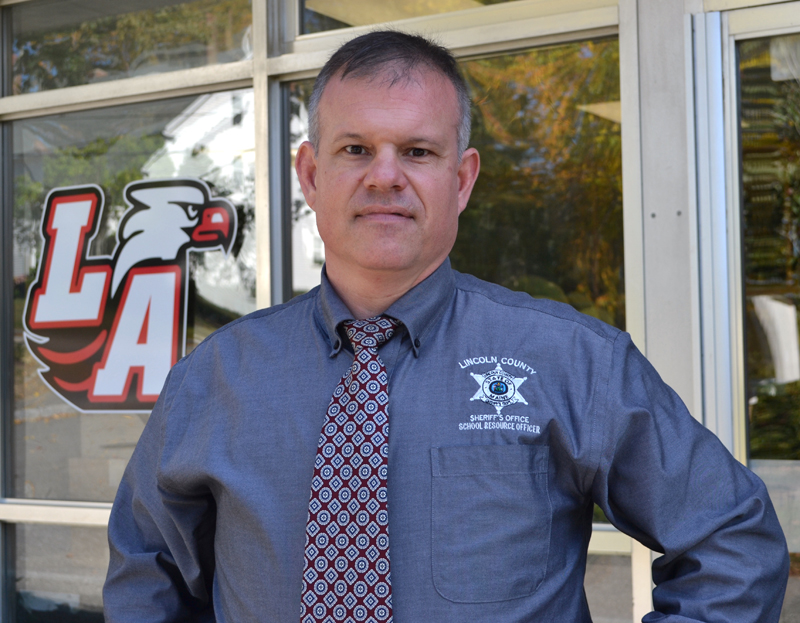 For the first time in more than a decade, a new school resource officer is walking the halls of Lincoln Academy.

Lincoln County Sheriff’s Office Deputy Chad Gilbert took over the post at the beginning of the school year after the promotion of Sgt. Mark Bridgham, who had served as the school’s resource officer for the past 13 years.

When Bridgham was promoted in the spring, Gilbert submitted an application to take over the role. He said he was drawn to the position partially due to his positive experience teaching Drug Abuse Resistance Education, or D.A.R.E., to fifth-graders at Whitefield Elementary School.

While high schoolers face different issues than fifth-graders, one of the goals of having a law enforcement officer in school is the same, Gilbert said.

“In both cases, it’s about trying to build those positive interactions with the students,” Gilbert said. “We want them to know we’re here for them. It doesn’t matter if they just need someone to talk to or if it’s a car accident.”

As LA’s school resource officer, Gilbert’s primary goal is to “keep the kids safe and provide a secure learning environment,” he said. In the morning, he’s typically in the school parking lot as cars arrive, and throughout the day he walks around campus to make sure buildings are secure.

Gilbert has an office within the school, but he prefers to be out in the buildings and around school grounds, interacting with students.

“Some of the emotional states and relationship statuses the students are dealing with, while also trying to learn, it’s a lot,” Gilbert said. “When you’re in high school, you’re not only learning things in the classroom, but you’re also trying to figure out who you are, and it can get overwhelming. Sometimes you just need another person to talk to.”

While some concerns can be solved with a conversation, other times Gilbert points the student in the direction of additional resources, including LA faculty and staff.

“It’s about showing them that they’re not dealing with this stuff on their own, there’s a community here focusing on helping them,” Gilbert said. “The entire school is very student-oriented and focused on making sure they have all the tools they need to succeed and graduate.”

One goal Gilbert would like to see accomplished during his tenure is to have all students graduate, he said.

The community at Lincoln Academy “offers a snapshot” of Lincoln County, and often feels like a small town of its own, Gilbert said.

“Some of the things you see out patrolling are also here, just in a smaller, different sense,” Gilbert said.

One of the similarities is car accidents. Gilbert said he has had to deal with the occasional motor-vehicle accident in the student parking lot.

“The accidents in the parking lot are very minor compared to the ones we see out on the road, but to the kid who just had their first car accident, it’s a much bigger deal,” Gilbert said. “For them to have a friendly face and walk them through it, it’s helpful so that they can learn what to do if, in the future, they’re ever in the same situation.”

Gilbert continues to do patrol work with the sheriff’s office on weekends and will work during the summer when LA is on break. He said he hopes the trust he builds with the students will carry over to when they see him outside the school.

“Some of the students will come up and shake my hand or say, ‘Hey, Deputy Chad,’ and wave, and I hope that continues, I really do,” Gilbert said. “Like I said, it’s all about building those relationships and trust and showing them we’re here to help, no matter what.”