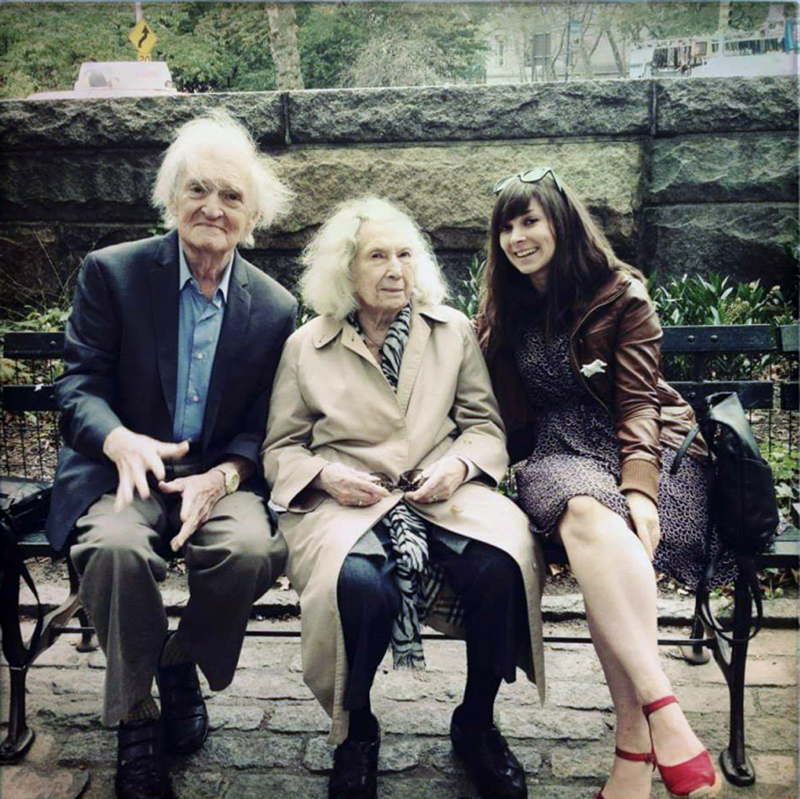 The name and image of the late composer John Morris, who passed away at age 91 on Jan. 25 of last year, appeared on the big screen during the approximately four-minute-long “In Memoriam” video tribute at the 91st Academy Awards ceremony at the Dolby Theatre in the star-studded Los Angeles neighborhood of Hollywood on Feb. 24.

Among his many career credits, Morris worked with celebrated filmmaker Mel Brooks for years, composing the music for 20 of Brooks’ films, including the comedic classics “Blazing Saddles,” for which Morris was nominated for an Academy Award, and the cult classic “Young Frankenstein.”

Morris was nominated for a Grammy Award for the score he wrote for the 1980 film “The Elephant Man,” for which Brooks was an uncredited executive producer. 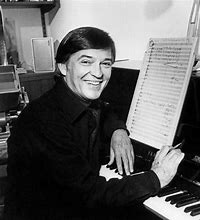 Morris composed the music for the Oscar-winning 1987 film “Dirty Dancing,” starring Jennifer Grey and Patrick Swayze, as well as for numerous other films, including comic actor, screenwriter, and director Gene Wilder’s “The Adventure of Sherlock Holmes’ Smarter Brother” and “The Woman in Red” and Marty Feldman’s “The Last Remake of Beau Geste.”

He also wrote the music for a number of television shows, such as “The French Chef,” starring Julia Child, and the popular series “Coach,” which ran from 1989 to 1997.

The Juilliard-trained Morris, in his early days as a pianist, before he devoted himself to composing, served as the chosen pianist for both actress-singer Judy Garland and comedian Lucille Ball.

Other than the obvious reason, Morris’ elevated stature in the world of Hollywood is worthy of note because Morris in his East Coast life was a humble man by all accounts, a man who did not boast of his considerable achievements. If one did not already know that he was a highly accomplished and revered Hollywood celebrity, one would likely never know unless one was his close friend — someone like New Harbor resident Beth Farrell.

“You wouldn’t know he was a celebrity,” Farrell said in a recent interview at her home overlooking the Atlantic Ocean. Morris and his wife, Francesca Morris, lived next door to Farrell for decades, beginning in the 1960s, when they would come up to Maine from their home in New York.

“They were so down-to-earth,” said Farrell of the couple.

“He was so unpretentious,” she said of John Morris. “He loved Lincoln County. He went to all the oyster festivals. He went to Boothbay Railway Village. He went to Olde Bristol Days.

“He never said, ‘I’m John Morris.’ Everyone really liked him.”

Sometimes Morris would mention such luminaries as Mel Brooks and (the late comedian) Dom DeLuise to Farrell (“Dom DeLuise was his favorite!” she said), and Gene Wilder was a visitor to his New Harbor home. But never did Morris boast about his Hollywood fame and his connections. He was so low-key and enamored of Lincoln County’s own down-to-earthness, in fact, that he took Wilder out for ice cream at Round Top Ice Cream in Damariscotta simply because he thought it was a good place to get ice cream and wanted to share that.

Farrell recalled the love that John Morris expressed to his son, Evan Morris, who preceded him in death by four years.

“When Evan was first here (as a child), my father introduced him to fishing. He got hooked,” said Farrell. “John, who was the kind of person who couldn’t mow a lawn, couldn’t do anything around the house, he learned how to do everything to help Evan fish. That’s the kind of guy he was.

“John did all the cooking at his house. He waited on Francesca hand and foot. He brought her breakfast in bed.” 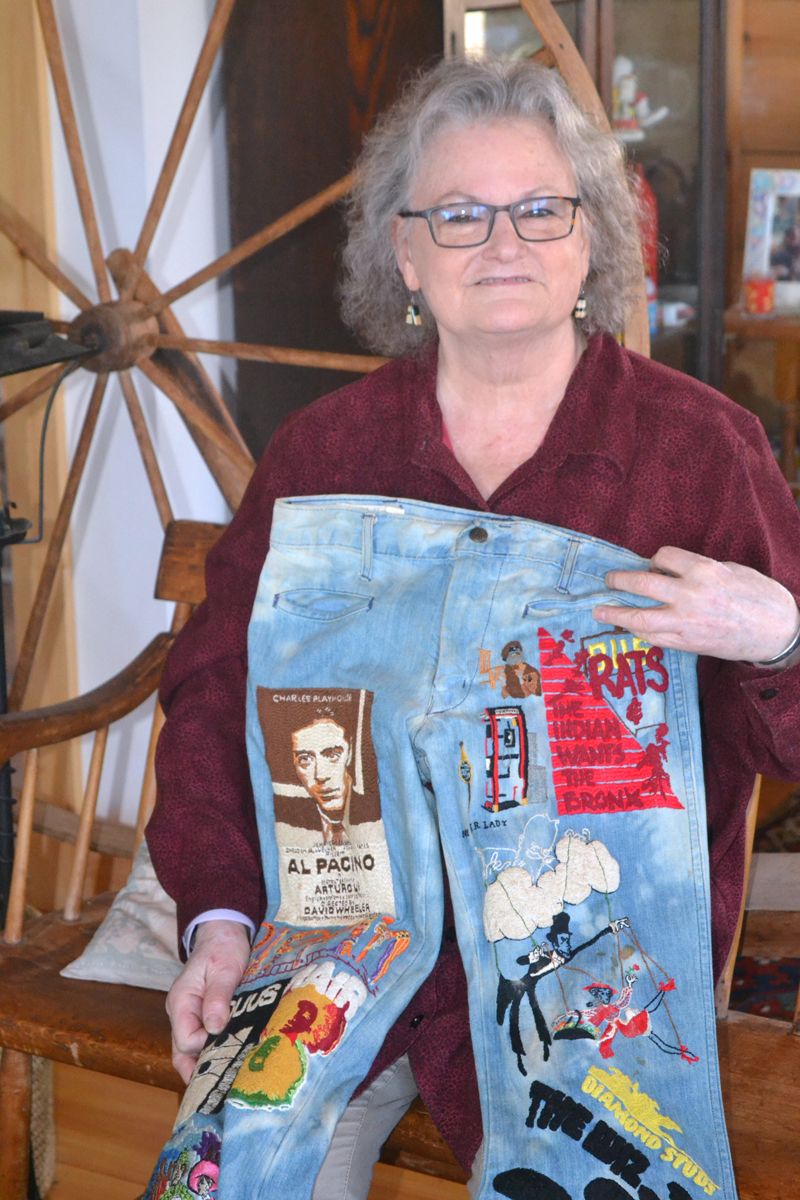 Beth Farrell, of New Harbor, who was the late Hollywood composer John Morris’ neighbor for many years, holds a pair of embroidered blue jeans, created at the request of filmmaker Mel Brooks. (Christine LaPado-Breglia photo)

“He even offered to pay for my son, Lakotah’s, college education,” she said, adding that she and Lakotah did not take Morris up on that generous offer.

However, John Morris regularly hired Lakotah to do odd jobs at his house, Farrell said. “Lakotah used to go over and fix things for him and he never had any money on him. He would pay him in whatever he had around the house, like sparklers,” she said, laughing. He bought Apple stock for Lakotah, she added.

Farrell recalled the affectionate name Lakotah had for the energetic John Morris when he was a child, “John-Gone,” because, as she put it, “John used to bounce in to visit (from his stints in Hollywood studios) and then he’d be gone again. He’d always have to be doing something.”

Farrell recalled that John Morris “was a big fan of my embroidery. He had me do a purse for Fran. He said Mel Brooks would love it.” Eventually, Farrell found herself creating elaborately embroidered pieces for Brooks himself, such as the embroidered ovals of DeLuise and Feldman that Farrell created to be used for the album cover for Brooks’ “Silent Movie” and a pair of blue jeans featuring the embroidered images of movie star Al Pacino and the multicolored 1969 album cover for the Broadway musical “Hair,” among other well-known images.

“I don’t think anybody would dislike him,” said Farrell of John Morris. “He was just the nicest guy in the world.”

“He used to tell my dad that he was the greatest punster in the world,” she added nostalgically. “He would just laugh and howl at my dad.”

“He was just a really down-to-earth guy,” Farrell repeated, for emphasis. “In fact, when he got nominated for ‘Blazing Saddles,’ he didn’t even go to the awards ceremony.”

Brooks notably said in a Jan. 28, 2018 interview with New York Times writer Richard Sandomir of Morris, “He was my emotional right arm. Music tells you what to feel and he knew what I wanted you to feel. He composed it and made it happen.”

As Stephany Morris, who was married to Evan Morris until his passing, said of John Morris in a recent phone interview from her winter home in Florida, “John was a very humble man … He was funny.  He was very sensitive. He was extraordinarily bright … He wasn’t selfish with his talents. He loved, he loved, he just loved youth and he loved helping … He was magnanimous and very charismatic … He was just so good at being a human being.”