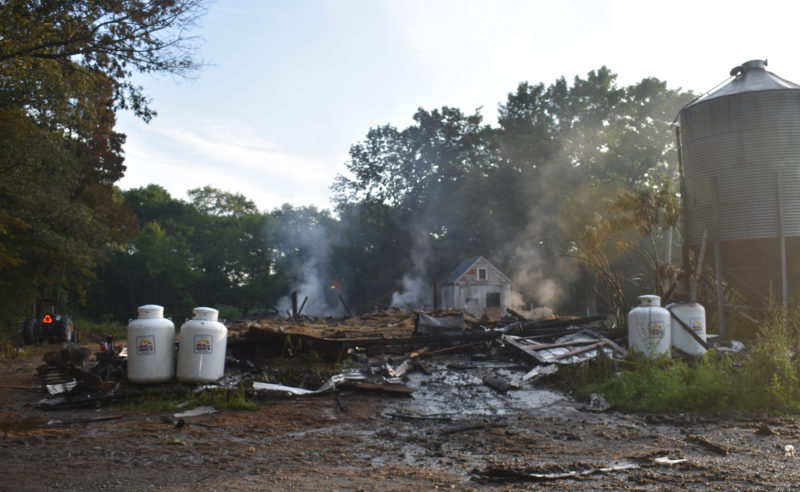 The aftermath of a structure fire in a poultry barn at 1071 Old Augusta Road in Waldoboro, first reported in the late evening hours of Wednesday, July 31, with fire crews battling the blaze into the early morning of Thursday, Aug. 1. (Alexander Violo photo)

Fire destroyed a barn and killed a large number of chickens and ducks inside, although some cattle escaped, at 1071 Old Augusta Road in Waldoboro late Wednesday, July 31 and early Thursday, Aug. 1.

The poultry were on the second floor of the barn, according to Waldoboro Fire Chief Paul Smeltzer. Maine-ly Poultry Inc., of Warren, was renting the space.

Smeltzer gave the number of birds as 6,000. John Barnstein, owner of Maine-ly Poultry, said he lost 1,500 meat ducks and 800 laying hens. He said he also lost “a lot of equipment.” The birds were not insured.

Property owner Greg Peabody, who lives at the address, was able to evacuate a small herd of cattle from the ground floor and get a tractor out of the barn before the flames prevented further access.

The ownership of the cattle was not clear.

The barn burned to the ground. Peabody has insurance, according to Smeltzer. 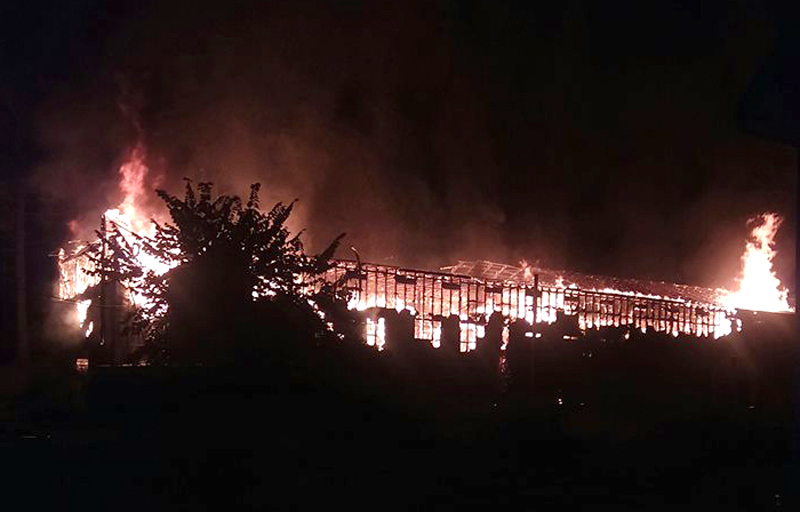 The Maine State Fire Marshal’s Office has deemed the fire accidental, according to Smeltzer.

“The exact cause has not been determined as of yet and, due to the extent of damage, I don’t know if it will be,” Smeltzer said.

Danielle Hodgkins, who lives in a nearby house on the property, said she warned firefighters of propane tanks on the side of the barn nearest the road, one of which had begun to catch fire as firefighters arrived.

She tried to help get the birds out of the barn, but was unable to do so.

Smeltzer said tankers from the neighboring departments assisted in the firefighting effort, as did Damariscotta’s ladder truck. Firefighters set up a fill station at the Carroll property, near the intersection of Old Augusta Road and Route 220.

Fire crews cleared the scene around 4 a.m. and cleared the fire station around 5:30 a.m., he said.