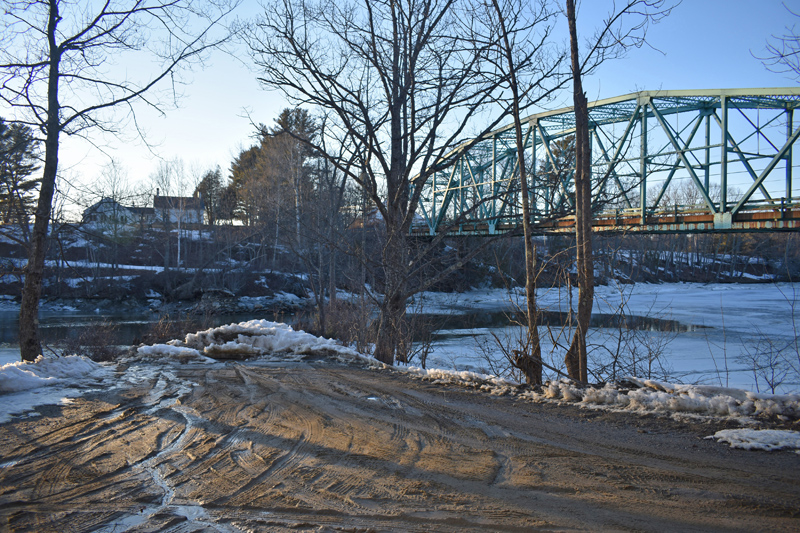 Dresden voters will decide whether to accept a gift from the estate of Inge Foster, a former selectman, to restore the Eastern River town landing under the Route 197 bridge. Foster lived in the house across the river. (Alexander Violo photo)

The estate of a late selectman is offering the town of Dresden $105,281.62 to restore the Eastern River town landing, at the end of Town Landing Road and under the Route 197 bridge.

Dresden voters will decide whether to accept the gift at annual town meeting in June.

Inge Foster left the money in a trust controlled by Co-trustees Joe Wiley and Peter Lincoln. They will release the money to the town if voters accept.

“Inge used to live across the river as well. She lived there most of her life,” Wiley said. “She was really fond of it, and I think that’s why she left the large amount of money to get it fixed up, so that other people could use it.”

The town landing consists mostly of medium-sized field stones piled up. Due to erosion, about a third of the rocks are missing, Wiley said.

Administrative Assistant Michael Henderson said the Dresden Board of Selectmen agreed to place an article on the warrant March 18, after Wiley presented the trustees’ plans.

“The other trustee and I felt the logical first step was to get the town to accept the money before we went through the process of acquiring a (Maine Department of Environmental Protection) permit,” Wiley said.

In an interview after the meeting, Wiley said he has finished about 20 percent of the application for the DEP permit necessary to do the work.

He started the process early because it takes a long time. “It’s not complicated, but there’s a lot of information we have to provide,” Wiley said.

If the DEP approves the permit, the U.S. Army Corps of Engineers will use the permit as its application for the project, although it may ask for more information after reviewing the permit.

If everything goes to plan, Wiley said the permitting could be done in either July or August and bids could be solicited in September.

The project would start with stabilizing the landing at dead low tide. Then the landing would be rebuilt to its original dimensions, likely using large granite rocks that would better withstand ice flow in the river.

“Making it safe for public use is the goal of the project,” Wiley said.

Lincoln formerly lived in Dresden, near the landing, but moved out of state. He is still involved in the process and frequently keeps in contact, Wiley said.

“He knows what we are doing here and when necessary, he will come back here and help out,” Wiley said.

The Maine Department of Marine Resources might place restrictions on the project or dictate the time frame for its completion to protect the 10 species of fish in the Eastern River that it has jurisdiction over.

If the bids come in higher than anticipated, the project will wait until the town decides whether to fund the remaining amount.

“Hopefully we can do the project for a little less, or at least not more than that,” Wiley said of the money in the trust.

“Our goal is not to require any town funding, but to do it entirely in the scope of the trust,” he said. “But if it comes in above the amount of money we have available, at that point we will have to ask the town for the money that we need to complete the project or not.”

Foster left directions for other places the money could go if the town does not accept the money.

Wiley said the landing is the only town-owned access to the Eastern River.

People primarily use the landing to fish from shore and sometimes as a rudimentary boat launch, and Foster wanted to preserve it for the same uses going forward.