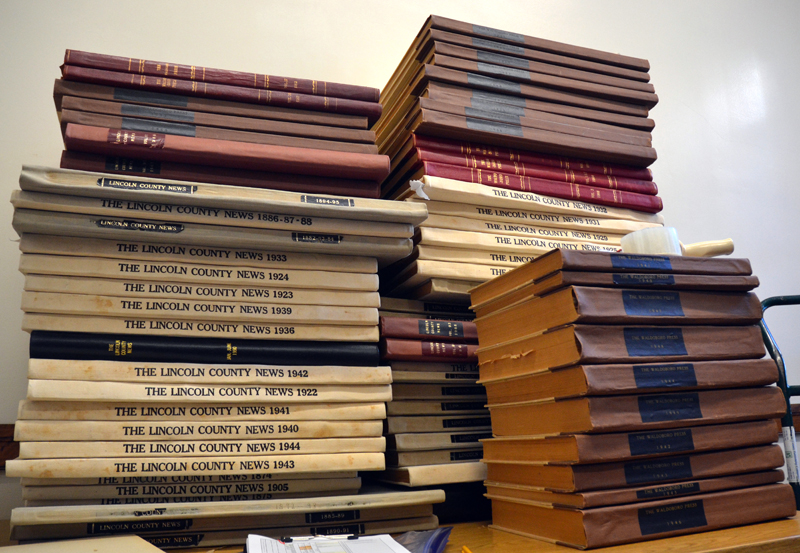 Stacks of bound archives of The Lincoln County News and some of its predecessors. (Maia Zewert photo)

The complete archives of The Lincoln County News will soon be on their way to the Midwest for digitization.

Skidompha Library and Lincoln County Publishing Co., which publishes The Lincoln County News, are partners on the project, which would preserve the complete archives of the LCN, along with the partial archives of several earlier newspapers. The oldest of the newspapers dates to around 1874.

Currently, the LCN archives from 1942-2007 are available in hard copy only at the newspaper’s office in Newcastle. The only copy of the pre-1942 archives were stored in a climate-controlled room at the Lincoln County Courthouse, but little to no public access was possible due to their fragile condition.

A digital archive exists from 2008 to the present day, however, only editions from mid-2016 to the present are readily available to subscribers at lcnme.com.

Library and newspaper employees have been working on the digitization project since December 2017. Their efforts went public in October of last year after Skidompha received a $30,000 grant for the project from the Burns Family Foundation. The grant funded 60 percent of the estimated $50,000 cost and jump-started the project, according to Torie DeLisle, director of development and programs for Skidompha Library.

“We were able to give Advantage (Preservation) $25,000 to get the ball rolling,” DeLisle said. “Once the digitization is complete, that’s when we’ll send the rest of the funds.”

Shortly after the LCN published an article about the project in October 2018, the library received a $5,000 donation for the project from Darby Langdon and Jonathan Wood. Langdon had worked with Skidompha’s staff genealogist, Kathleen Maclachlan, in the past, DeLisle said. 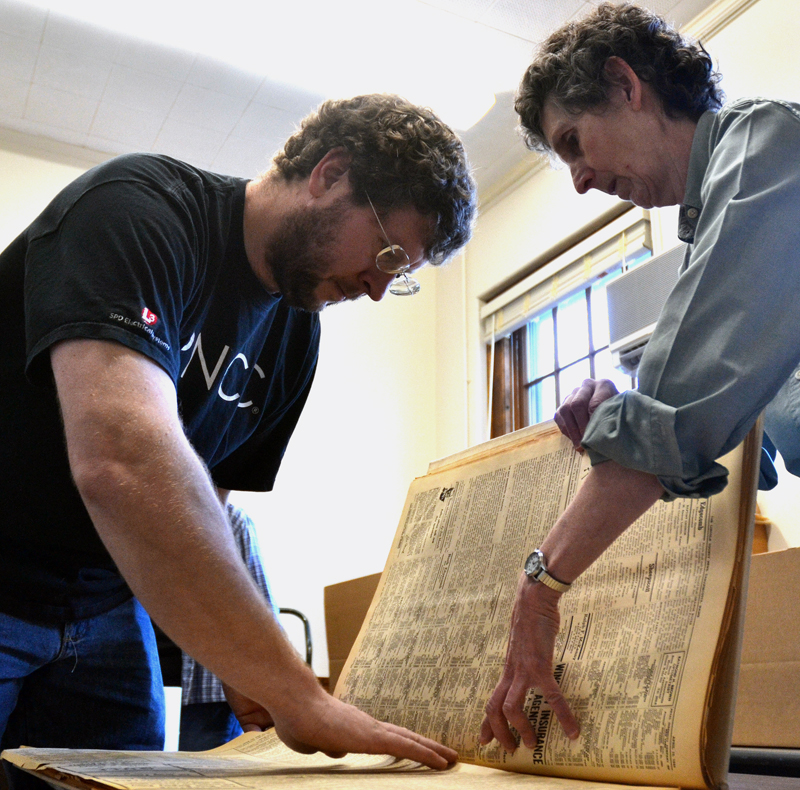 The library recently received an additional $5,000 donation to the project from Ann Poole, owner of Milling Around in Newcastle. Poole had met with DeLisle about the project and “wanted to do something significant for the community,” DeLisle said.

While more than $9,000 is still needed to complete the project, the library has enough funds in hand to start the process of digitizing the archives.

The measurements were sent to Advantage Preservation, a firm in Cedar Rapids, Iowa that specializes in the digitization of old and fragile newspapers. Advantage used the information to provide boxes for the complete collection. 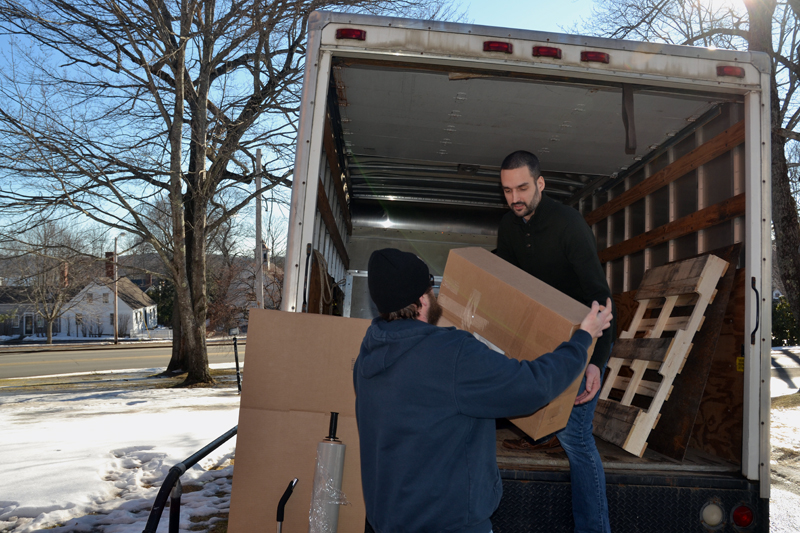 Much to the delight of the newspaper and the library, seven years of newspapers from the late 1800s and early 1900s that had been believed to be missing were discovered at the courthouse while taking inventory.

“It was an exciting discovery, as we want to preserve as much as possible of the newspaper record of our county,” Oliver said.

A crew of five from the LCN, with Maclachlan and Whitten, packed the archives in boxes Friday, Jan. 25 and brought them to Lincoln County Publishing in Newcastle, where a truck from Advantage is expected to pick them up Friday, Feb. 1.

After the digitization is complete, the archives will be made available in three ways: to LCN subscribers through lcnme.com, to library members through the library website, and to anyone who visits the library on the library’s computers. The physical archives will return to Lincoln County Publishing Co., at which point the company will determine where to store them.

The library is still accepting donations for the project, DeLisle said.

To help bridge the gap, the library will host the Through the Pages formal wear costume ball Friday, Feb. 22. Attendees are encouraged to dress in the fashion of any decade included in the digitization project. The evening will include light bites, live music, a silent auction, and a cash bar. Tickets are $10 per person and can be purchased at Skidompha or at supportskidompha.org.

As the digitization efforts near completion, the library and the newspaper are excited to see the final result.

“I can’t say enough about how grateful we are to the library and Patti for their work on this project, as well as to Lincoln County for storing the physical archives until we could ship them,” Oliver said. “We could never do this alone.”