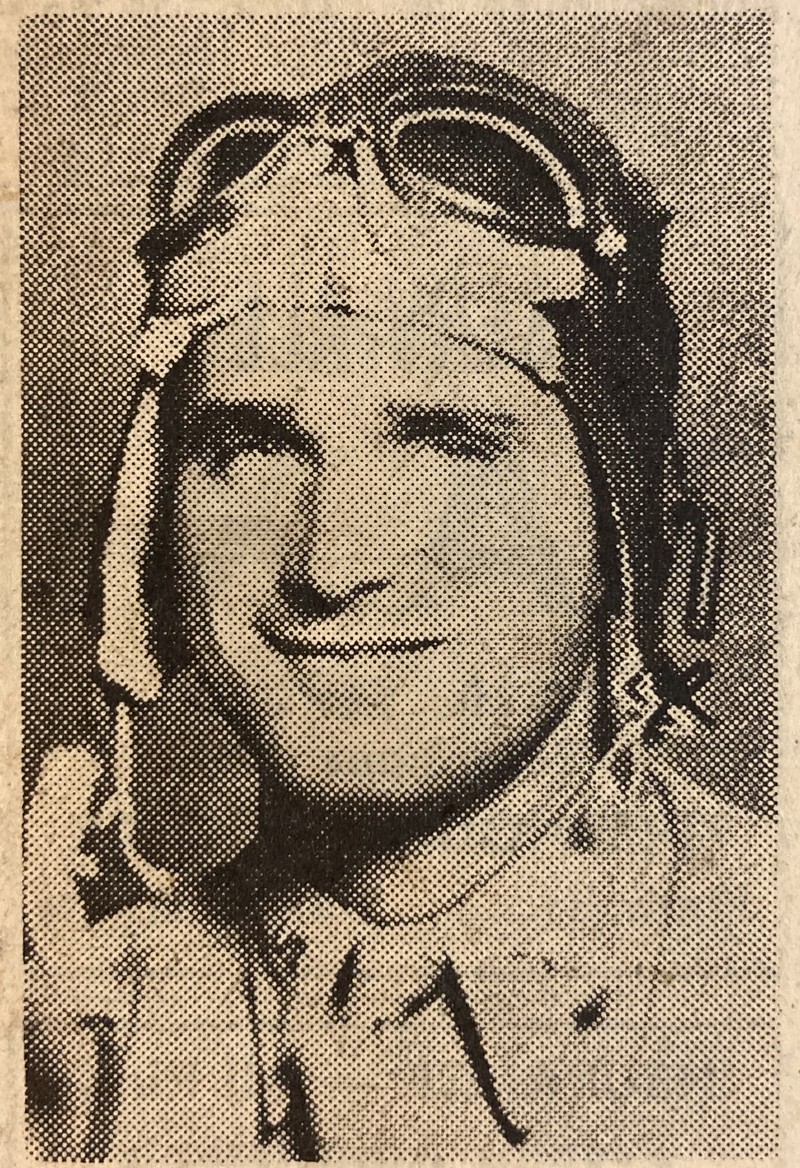 A volunteer effort to share the stories of servicemen killed in World War II recently completed a profile on a local man.

Lowell Silverman, of Newark, Del., contacted The Lincoln County News in late July as he was researching 2nd Lt. Lowell F. Simmons, of Damariscotta. Silverman’s work is part of Stories Behind the Stars, an initiative to organize the stories of service members killed during World War II into one online location. The stories are researched and written by volunteers.

Stories Behind the Stars founder and Director Don Milne, of Bountiful, Utah, started the project as a blog in December 2016. Now that word has spread about the initiative, the volunteer effort includes more than 400 people from 43 states and six countries.

“There’s about half a dozen people that reach out every day saying they want to help,” Milne said. “The people doing this just get addicted and keep going.”

Silverman, who has written a dozen profiles for the project, began researching Simmons after meeting Maj. Paul J. Collins, Simmons’ bombardier. During their interview, Collins spoke about Simmons’ character, which sparked Silverman’s interest in writing his profile.

“It’s impossible to learn details like that unless there’s a firsthand witness, and that’s why I decided to follow him in particular,” Silverman said.

Silverman began his research into Simmons by looking at documents and military records on ancestry.com and searched newspapers.com, a large online newspaper archive. Through the latter, he only found a few mentions of Simmons.

Silverman searched for local newspapers in the Damariscotta area and found articles detailing the effort to digitize the entire archive of The Lincoln County News. He contacted the newspaper for assistance in completing Simmons’ profile, which is available at bit.ly/lfsimmons.

Simmons was born in 1918. While attending Lincoln Academy in Newcastle, he frequently appeared in The Lincoln County News for his athletic abilities. He played basketball all four years and captained the team during his senior year, when the team posted a 14-0 record to win its second consecutive Knox-Lincoln League championship.

Simmons also competed in track and field, ran cross-country, and played baseball. He graduated in 1935. 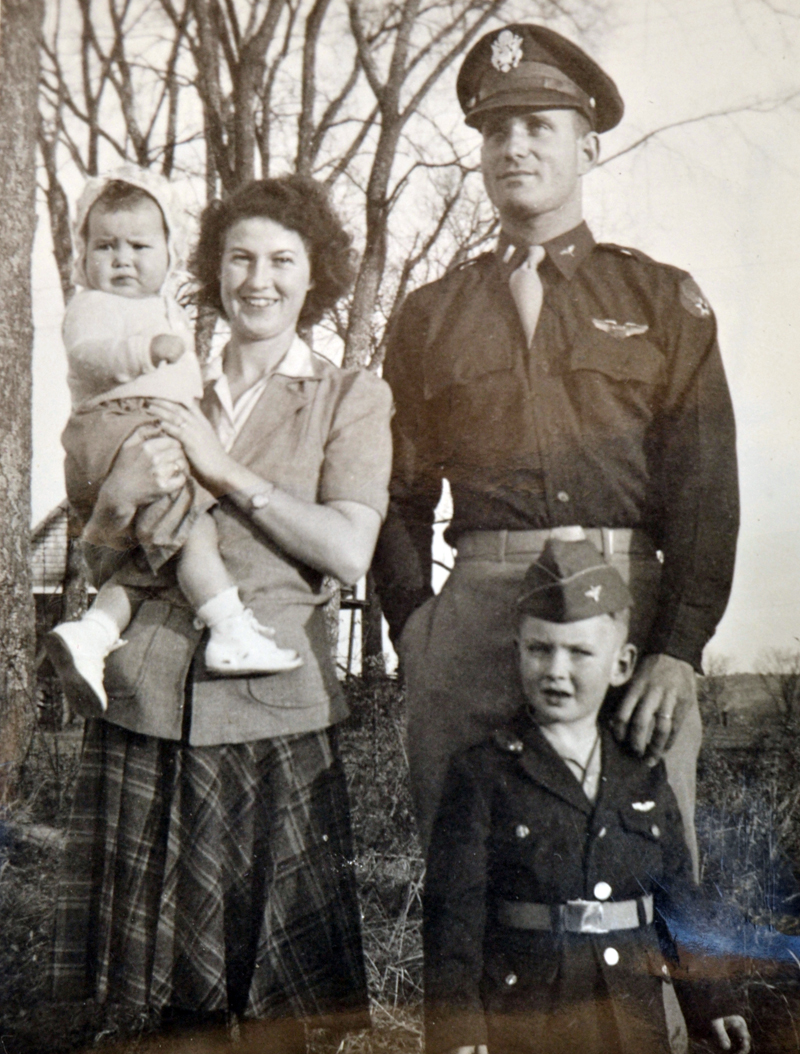 Simmons was mentioned in a front-page article in the Jan. 16, 1936 edition detailing a fire at Lincoln County Motors Inc. in Damariscotta. The fire destroyed 22 cars, but firefighters contained the blaze and prevented it from spreading to nearby buildings.

The article credited Simmons with making the initial call to alert fire companies.

“Lowell Simmons, coming into town to summon a physician saw the rear of the garage enveloped in flames,” The Lincoln County News reported. “He rushed to the nearest alarm box and rung the alarm. Both fire companies responded quickly and soon had the fire under control.”

Simmons enlisted and passed his air cadet entrance examinations in August 1942 and was called for flight training in February 1943. According to the LCN archives, he graduated with the rank of second lieutenant in the U.S. Army Air Forces in November 1943. After a furlough, he was assigned to overseas duty in the European Theater with the 8th Air Force in May 1944 and stationed in England.

An article on the front page of the July 20, 1944 edition reported that Simmons was missing in action. The following edition contained details his family received from the tail gunner in Simmons’ crew.

“This tail-gunner writes that the plane which Lt. Simmons was piloting or which a co-pilot was handling ran into a lot of flak,” the article said. “Three motors were set on fire by the flak and five crew members were seen taking to parachutes. After that with only one motor functioning, the plane continued to keep in the air. It is hoped that Lt. Simmons may have been able to land or have parachuted to safety and now be detained behind enemy lines and will later be reported.”

During Lincoln Academy’s class day on June 12, 1946, Simmons’ name was included in a silent tribute to graduates lost in the war, according to the newspaper.

The front page of the Dec. 26, 1946 edition included a letter from Brig. Gen. Leon W. Johnson to Flora Simmons. The letter followed the recent translation of German records.

According to Johnson’s letter, the records indicated that Simmons’ plane crashed at Friedrichshagen, Germany, on the outskirts of Berlin, and that he was buried in a Berlin cemetery. 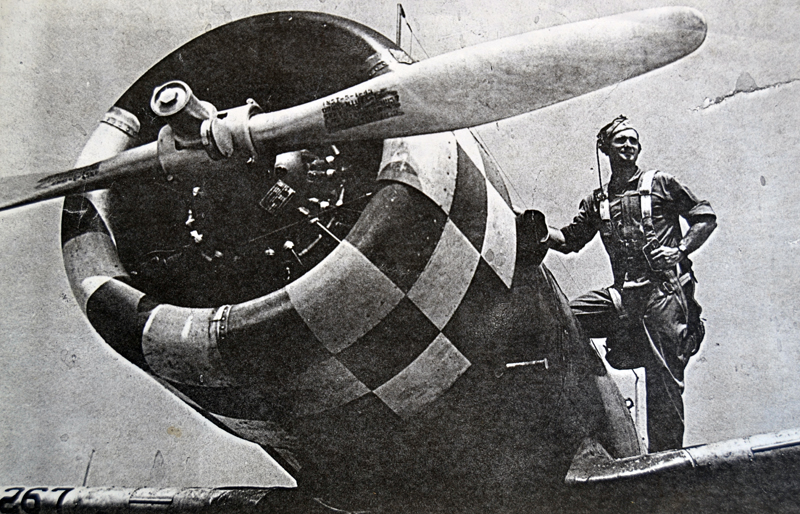 A missing air crew report also references the German records, indicating that the B-17 crashed near the Friedrichshagen neighborhood of Berlin around 10:54 a.m.

The conclusion of Simmons’ story didn’t appear in The Lincoln County News until the Aug. 11, 1949 edition, when his obituary ran on the front page of the newspaper before his military funeral. Simmons’ remains were returned from the Berlin ceremony and he was laid to rest in Hillside Cemetery in Damariscotta, according to the obituary.

In 2014, Simmons was inducted into the Lincoln Academy Sports Hall of Fame. He was described in the program as “a great athlete and even greater patriot.” His children accepted the induction on their father’s behalf.

The use of the LCN archive helped unearth details about another local veteran earlier this year. Local researchers used the archive to identify a person buried in an unmarked grave in Hillside Cemetery. The researchers arranged for and dedicated a headstone for Lt. Kimball Edward Hatch, a veteran of both the Spanish-American War and World War I, in May.

Milne said Stories Behind the Stars is always looking for volunteers to assist with researching and writing profiles. For more information, go to storiesbehindthestars.org/volunteer.