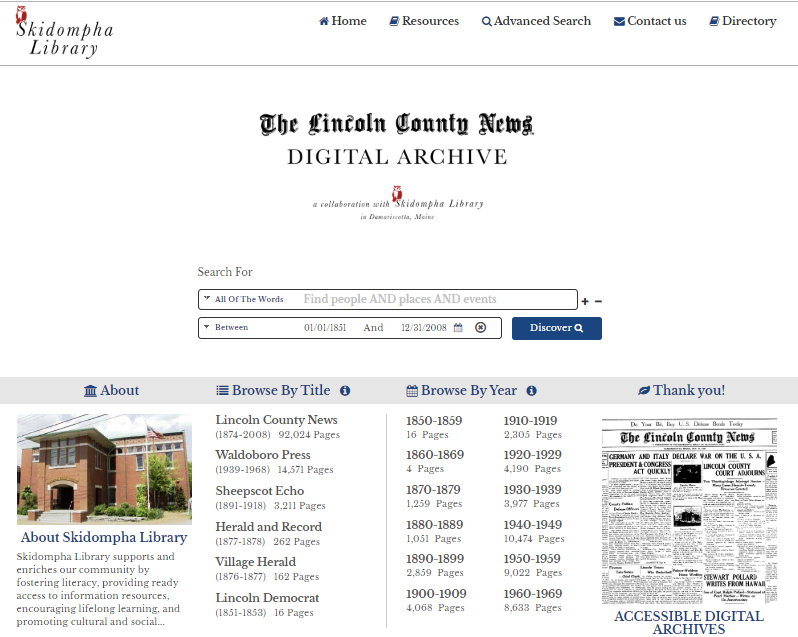 A screenshot of the homepage for The Lincoln County News digital archive, hosted by Skidompha Library.

The digital archives of The Lincoln County News are now available online through Skidompha Library.

Skidompha Library and Lincoln County Publishing Co., which publishes The Lincoln County News, partnered on the project, which preserved the complete archives of the LCN, along with the partial archives of several earlier newspapers. The oldest of the newspapers dates to around 1874.

“This project preserves the history of individuals, but also preserves the history of our communities,” said Kathy Maclachlan, staff genealogist at Skidompha. “We’ll find encouragement as well as information, and if we’ve got open eyes, minds, and hearts, we can grow from learning about our shared past – what has been done well and places where improvement is needed.”

“It’s a good feeling of accomplishment, to start a task that seems almost impossible, and partner with someone in the community to make it happen,” said J.W. Oliver, editor of The Lincoln County News.

Prior to digitization, the LCN archives from 1942-2007 were available in hard copy only at the newspaper’s office in Newcastle. Archives prior to 1942 existed only in a climate-controlled room at the Lincoln County Courthouse, but little to no public access was possible due to the documents’ fragile condition.

The partnership began in the winter of 2017, when the library learned of the newspaper’s need to relocate the archives from the courthouse and agreed to raise the $50,000-plus needed for the digitization.

Additional funds were provided by the Maine Community Foundation, the historical societies of Bristol, Damariscotta, Edgecomb, South Bristol, and Whitefield, and numerous individual donors. Skidompha also hosted the successful Through the Pages costume ball to support the project.

“We can’t thank Skidompha enough for agreeing to take on the fundraising,” Oliver said. “We had explored other options in the past, but nothing seemed feasible until the opportunity to work with the library presented itself.”

In late January, employees of The Lincoln County News, with Maclachlan and project volunteer Patti Whitten, packed the archives at the Lincoln County Courthouse. The archives were then transported by truck to Advantage Preservation, an Iowa firm that specializes in the digitization of old and fragile newspapers.

A group of local researchers has been testing the archives website since the digitization’s completion, Maclachlan said. Maine State Historian Earle G. Shettleworth Jr. has used the archive to research Monhegan Island artists Eric Hudson and Samuel Triscott, as well as life on the island in the 19th and 20th centuries.

“In my experience, old newspapers are one of the best primary sources for research on Maine local history that is available,” Shettleworth said. “They are like the kind of cumulative memory of a community, really, and once you learn how to use them, there are all kinds of wonderful information you can find.”

Shettleworth began his research in the late 1990s by looking at editions of The Lincoln County News at the Maine Historical Society in Portland and the Lincoln County Courthouse. After getting all he could from those records, he set his notes aside until about six months ago, when he revisited his research.

“I got in touch with Skidompha, who told me about this wonderful project,” Shettleworth said. “I have been able to, in the convenience of my own home, go through the different years that I want to see what was published in the local event columns and fill in the missing information. It will really enable me to have as complete a set of these local events columns about Monhegan as is possible.”

Shettleworth said he hopes to publish the material in the spring.

Skidompha Library cardholders can request access to the archive online at skidompha.org/genealogy/archive-access by providing their name, email address, and library card number. A follow-up email will be sent with the website URL and personalized username and password.

Access to the archives is also available at Skidompha Library.

In early 2020, Skidompha Library’s genealogy section plans to host several small-group tutorials for those who would like to learn how to use the search engine for the archives, Maclachlan said. Dates and sign-up links will soon be posted on the Skidompha Genealogy Programs page of the library’s website.

The Lincoln County News will offer access to the archives to its subscribers once the newspaper’s separate online portal is complete.

Both Maclachlan and Oliver spoke highly of the teamwork between the library and the newspaper to complete the project.

“I’m a big fan of Skidompha and of libraries in general, and this is another example of how libraries, especially now, do more than just lend books,” Oliver said. “Without the library, this archive wouldn’t be available.”