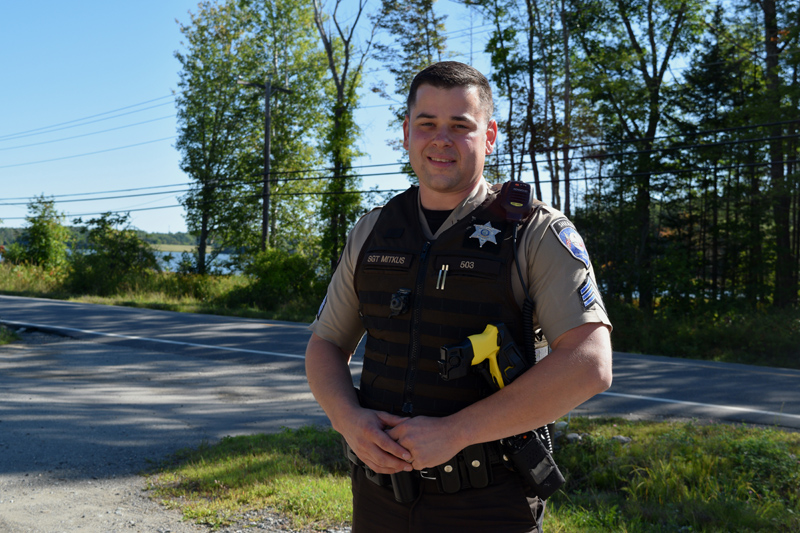 A Lincoln County Sheriff’s Office detective has been promoted to patrol sergeant.

“I kind of fell into it. I got lucky,” he said of starting his career in law enforcement. When Mitkus was in high school, he didn’t know what he wanted to do.

“I got lucky with Sheriff (Todd) Brackett giving then a 19-year-old kid a shot with parking enforcement,” he said. “That got me working around police officers.”

At the time, Brackett was Damariscotta’s police chief.

Mitkus’ favorite part about the job, and what keeps him in the line of work, is that every day is different.

“It can also be frustrating too. You set goals and deadlines for stuff you want to complete, but we have no control over what’s coming through a phone call or the radio, so you have to be willing to drop what you’re doing and take care of business,” he said.

Mitkus earned an associate degree in criminal justice from Andover College in Portland.

In the summers of 2002 and 2003, he worked parking enforcement for the Damariscotta Police Department.

Starting in September 2003, he worked as a part-time officer for the same department. He then shifted to full-time work, to cover another officer who was attending the Maine Criminal Justice Academy.

In February 2004, he started working full-time for the Boothbay Harbor Police Department, where he stayed nine years before becoming a patrol deputy at the sheriff’s office in October 2013.

Mitkus’ first promotion at the sheriff’s office was in April 2015, to detective.

As a detective, Mitkus specialized in domestic violence investigations, but covered other cases too.

According to Mitkus, a typical investigation would begin with a deputy going to a scene. In the following days, he would talk with the victim, the defendant, and any witnesses. If children were involved, he would work with the Maine Department of Health and Human Services.

“The detective is going to sit there with the entire case in front of them and analyze it and make a plan as to what they are going to do with it versus on patrol it is more immediate – you think quickly and problem-solve quickly and find a resolution to whatever is going on,” Mitkus said.

The detective job entailed a high case load, he said.

In his new position as patrol sergeant, Mitkus will manage about three deputies per shift.

His job entails mentoring the deputies, managing incoming calls and deciding which should take priority, covering calls, and providing backup to deputies at calls. He patrols in an unmarked Dodge Charger.

His new responsibilities also include serving as site coordinator for Intoxilyzer records at Two Bridges Regional Jail. He makes sure the devices are in order, replaces the solution as needed, performs calibration checks, and documents the checks. He is also responsible for submitting traffic tickets to the state.

Mitkus said he has received great training from his bosses and is excited to share his knowledge with both new and experienced deputies so one day they can earn promotions.