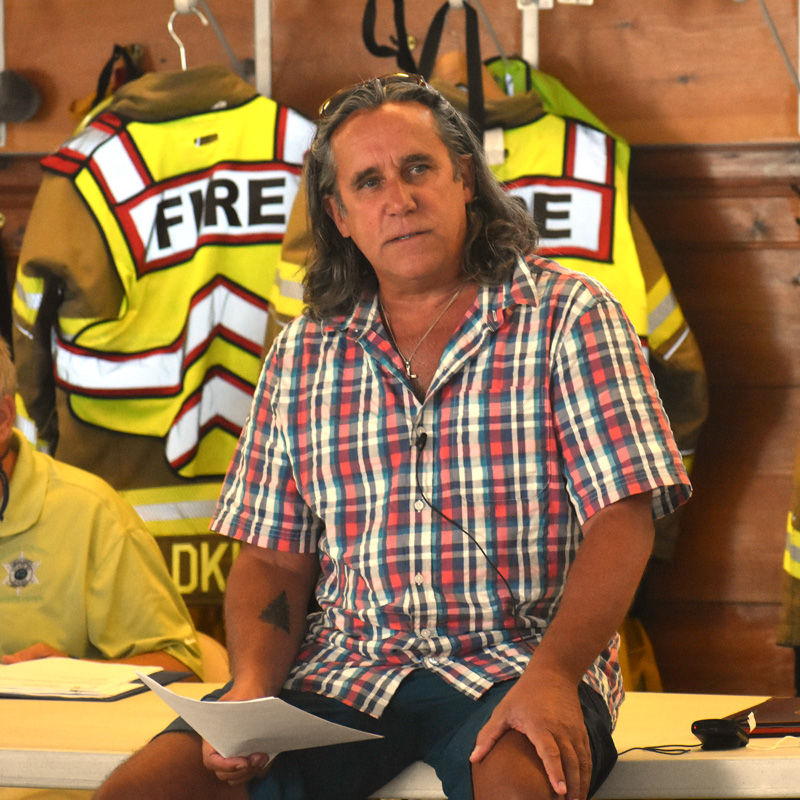 Matthew Hanly, of Bremen, discusses white privilege during a forum on police use of force and systemic racism at the Bremen fire station, Thursday, July 9. (Alexander Violo photo)

The Lincoln County Sheriff’s Office has engaged in self-reflection and training spurred by worldwide calls for policing reform, Sheriff Todd Brackett said during a forum in Bremen on Thursday, July 9.

The sheriff’s office hosted the forum on the agency’s policies regarding use of force and training to combat systemic racism in policing.

The forum, which covered issues ranging from white privilege, implicit bias, and whether the sheriff’s office uses beanbag rounds (it has a policy for their use but does not equip deputies with them), took place at the Bremen fire station, and the sheriff’s office livestreamed the event on its Facebook page.

The Rev. Charlene Curtiss “Char” Corbett, a Bremen resident, chaplain of the fire department, and pastor of The Second Congregational Church in Newcastle, moderated the forum.

“We are looking for opportunities to grow in our understanding of systemic racism and its impact on policing and this is the right time and place to do that,” Corbett said. “I’m asking everyone to keep an open mind. There is a whole range of understandings, perceptions, and knowledge around racism and white privilege. Some people get it, some people don’t. That’s OK. This is a safe place where we can share what we do and do not know.”

The community forum was organized after Bremen resident Matthew Hanly wrote the Bremen Board of Selectmen about the town’s policing principles in the context of worldwide protests calling for policing reform.

The town does not have its own law enforcement agency, but falls under the jurisdiction of the sheriff’s office. Hanly then met with Brackett to discuss LCSO policies.

Before retirement, Hanly was a head of school in Grosse Pointe, Mich., an affluent community near Detroit. He said that experience gave him an understanding of white privilege.

Hanly said the idea of white privilege takes nothing away from people who have achieved success through grit and hard work.

Hanly went on to list examples of white privilege.

Hanly stressed the importance of Black Lives Matter as opposed to the common rebuttal of “all lives matter.”

“True, all lives matter, but it is important in this moment in time and our history that we focus on Black Lives Matter. It’s important, at this point in time, to say it is an important movement,” Hanly said.

Brackett, first elected sheriff in 2002, said protests calling for police reform have led him and his deputies to examine the work they do and the way they do it.

“There has been a lot of self-reflection going on. We have taken a look at ourselves in the mirror pretty hard based on what is going on nationally. I don’t like to be painted with a wide brush, but it is hard not to be,” Brackett said.

Christa Thorpe, a Bremen resident and member of the Bremen School Committee, asked about use of force in schools and how bias may contribute to any discrepancies between students.

“I am also wondering about the trainings, whether you have done implicit bias training with the police force here. I feel that maybe that’s another way to start addressing the question of why these disparities in our prison populations exist,” Thorpe said.

“There has been a lot of talk about bias in policing, racism in policing, for good reason. I don’t question that. I understand that, but it is much deeper than that,” Brackett said. “We are a reflection of our community. If child A is being treated differently than child B at school from a disciplinary perspective, for any reason, especially the color of their skin, that is an issue, a serious issue.”

As far as bias training goes, the sheriff’s office is taking advantage of online resources.

“There were some immediate steps we could take. We’ve identified 14 different categories of training and we started with implicit bias, specific to policing,” Brackett said.

Implicit bias “is on my mind and I want it to be on my staff’s mind and we are trying to figure out how we can do a better job. It is going to take some time. I don’t have a quick or immediate fix,” Brackett said.

Stacey Simpson, a Damariscotta resident who has organized Black Lives Matter rallies on Thursdays in Newcastle’s Veterans Memorial Park, talked about the importance of in-person interactions and training.

Simpson cited her positive experience with her D.A.R.E. officer, Mary Trescot. Trescot, a former deputy with the sheriff’s office who now chairs the Lincoln County Board of Commissioners, was in attendance.

“I think that sitting someone in front of a computer and learning is very different than personal interaction and having a story with it. I’m looking in this room and my teacher who taught me D.A.R.E. is in this room and I remember her because of the stories, because of her being a great teacher. It was personal,” Simpson said.

Brackett agreed that the sheriff’s office needs to do more and will do more face-to-face and classroom training.

“We are planning on doing more. Online doesn’t beat face to face. We have some face-to-face challenges right now, but we are working on it,” Brackett said.

Brackett was joined at the forum by Chief Deputy Rand Maker and Lt. Brendan Kane. About 25 people attended the forum in person.