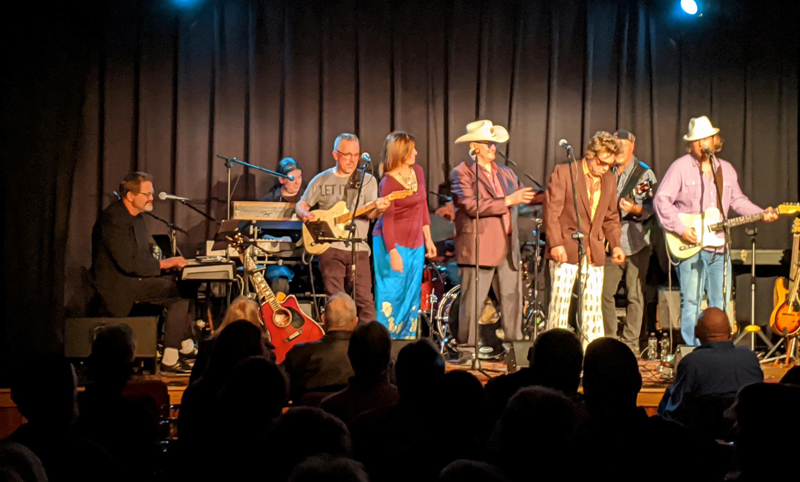 Bobby Colwell (far left) leads a reenactment of “The Last Waltz,” the 1978 Martin Scorsese documentary about The Band’s farewell concert. Colwell and other Maine musicians will perform the show at Lincoln Theater in Damariscotta on Sunday, Jan. 12. (Photo courtesy Larry Sidelinger)

“It’s a new year and a new regime. We’re just trying to refill the coffers here at LCTV,” said Larry Sidelinger, president of the Lincoln County Television Board of Directors.

Sidelinger also sees the concerts as a relatively affordable opportunity for local music lovers to get out of the house and have some fun this winter. Tickets are $20 each.

After some recent personnel changes, LCTV is moving in a new direction and refocusing on the local communities it serves.

“The concerts in downtown Damariscotta will make us more visible to the business community and the community at large, and they will give us the funds needed to do that,” Sidelinger said.

Sidelinger said the station will use the funds to replace three nearly 30-year-old cameras, upgrade an aging battery backup system, and complete some minor improvements to its building on Sheepscot Road.

He said the station needs a new battery backup system to avoid having to manually restart the entire LCTV system and website every time the power goes out.

All three concerts will take place on Sundays at 2 p.m., with the doors opening at 1.

The first concert, on Jan. 12, will be a reenactment of “The Last Waltz,” a 1978 Martin Scorsese documentary about The Band’s farewell concert that is widely regarded as one of the greatest concert films of all time.

A collaborative of Maine musicians led by Bobby Colwell, a keyboardist from Hallowell who is a member of The Boneheads, will perform the shows.

The second concert, on Feb. 16, will be a Rolling Stones tribute, complete with a Mick Jagger impersonator.

The third show, March 22, will be a tribute to the original Woodstock festival, showcasing everyone’s favorite songs from the legendary gathering of nearly 500,000 people on Max Yasgur’s farm in Bethel, N.Y. in August 1969.

Sidelinger said that if there is good turnout for the first three concerts, there is an option to hold a fourth. This concert would likely be a tribute to the music of 1967, the “Summer of Love,” Sidelinger said.

To buy tickets, contact LCTV at 563-6338 or lctv@tidewater.net. Tickets are also available at Cupacity, from LCTV board members, and from Bobby Whear, co-host of the long-running LCTV show “Wuzzup News.”

LCTV is seeking local businesses or individuals to sponsor the concerts.

LCTV is seeking local businesses or individuals to sponsor the concerts.