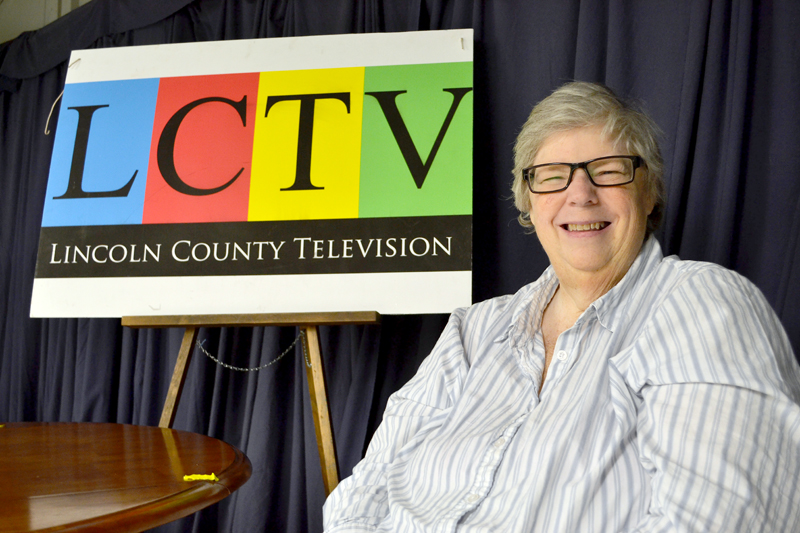 For more than a decade, Lincoln County Television Executive Director Mary Ellen Crowley has been instrumental in the nonprofit public-access station’s evolution, from an upgrade to allow 24-hour programming to a move into a permanent building.

Early this month, Crowley stepped down from the position after receiving a diagnosis of terminal cancer.

Crowley, of Damariscotta, first came to Lincoln County on the suggestion of a friend in 2004. After spending time in Florida, she had moved back to her native state of Massachusetts and started looking for a house.

“I remember being frustrated because I couldn’t afford anything in Massachusetts … A friend of mine kept saying ‘Come to Maine! You have to go to Maine!’ but I told her it was too far away. I didn’t think I would move up here,” Crowley said.

At her friend’s urging, Crowley planned a weeklong visit to Belfast, during which she spent time exploring the state. Struck by the friendliness of the people and the beauty of the landscape, she decided to make Maine her home. She initially bought a house in Waldoboro before moving to Damariscotta.

“It was the best decision I’ve ever made,” Crowley said. “I’ve made some wonderful, incredible friendships during my time here and I would do it again.”

It was one of her new friends, Charlotte Davenhill, who drew Crowley to LCTV in the first place, with an invitation to join the station’s board of trustees. Crowley jumped at the chance to get involved with a public-access television station, even though she had no prior experience in the arena.

The production aspect of the station interested her. She often sat with Alan Lowe, the station manager at the time, to learn the ins and outs of running the channel.

When Lowe departed and LCTV needed a new station manager, Crowley stepped forward and took over the role in June 2008.

“When I moved to Waldoboro, I had 33 previous addresses and about as many jobs, and I think that’s why I wasn’t afraid to try it out,” Crowley said. “I wanted to see the station succeed, I was in the position where I had the time capabilities to take it on, and I had the chutzpah to say, ‘I can do this.’”

During her nine-year tenure in a position she “definitely thought was going to be a temporary thing,” Crowley watched as LCTV went through some big changes, from the integration of an automated programming system to a move into a new building on the same property on Sheepscot Road.

The new, computerized broadcast system allowed LCTV to transition from having to manually insert VHS tapes and DVDs to being able to schedule programming in advance, Crowley said.

“We now had the ability to set up a schedule and plug in shows straight from the file server, rather than (having to) be here the whole time,” Crowley said.

The new system allowed LCTV to be on the air 24 hours a day, “but it also meant we had to fill 24 hours of programming,” Crowley said.

To achieve this, the station began filling time with programs from other public-access stations in Maine while also training area residents to shoot and produce more content. The latter, to Crowley, is the most vital role LCTV plays in the community.

“The most important part of LCTV’s mission is to educate people about how to express themselves with video and then give them a place to air their productions, and that’s still true today. We’re giving local people the ability to master a new medium,” Crowley said.

One of Crowley’s “absolute favorite” projects she worked on during her time at LCTV was “Audrey Bechler Reflections,” a video biography of a Waldoboro artist co-produced by Crowley.

“It took a lot of time. I didn’t have the skills when we started, but I developed them really quickly as we worked on it,” Crowley said.

In late 2008, LCTV moved into a new building, leaving behind a “single-wide trailer inhabited by squirrels and nuts,” Crowley said. The station had purchased a former mobile classroom from the former A.D. Gray School in Waldoboro. The two-room building provided a much-needed increase in studio space.

As executive director, Crowley was responsible for many aspects of station operations, from processing and uploading videos for the channel and the station’s website to fielding requests for videographers. One of the most important components, however, was advocating for the station’s funding from area towns.

Shortly after Crowley became executive director, the station developed a funding formula to determine how much to request from each town based on population and number of cable subscribers. Municipalities receive franchise fees from cable companies, which they can choose to pass on to support public-access TV.

As a result of the new formula, the station ended up “almost tripling its revenue” from 2007 to 2011, when it received close to $40,000 in support from municipalities, Crowley said.

The figure has “unfortunately” remained the same for the past few years, Crowley said.

“We’re being funded at the same level, even though costs are going up,” Crowley said. “I feel like LCTV has not come anywhere close to what it could be, and I strongly encourage the towns to think about helping us grow, because it can only help them.”

The station receives numerous requests for videographers, half of which go unsatisfied due to a lack of equipment, volunteers, or both, Crowley said. While some programs, like the talk show “Wuzzup,” can take a volunteer approximately an hour and a half to shoot and edit, other events, like the Damariscotta Pumpkinfest Giant Pumpkin Parade, can take hours.

“It can be time-consuming work,” Crowley said. “You have to be willing to learn how to shoot and edit video and put in the time to get better.”

LCTV also broadcasts public meetings from towns in its coverage area, including Bristol, Damariscotta, Newcastle, and Waldoboro. LCTV has worked with several towns to purchase and set up automated video systems, meaning an LCTV volunteer does not need to record the meeting.

“I think that’s another really important thing we do, because a lot of people do want to know what’s going on in their government,” Crowley said.

Crowley estimated that she worked about 28 hours a week before she received a diagnosis of cervical cancer last fall and underwent radiation and chemotherapy treatments.

She cut her hours back to 24, meaning she had to give up the public-relations aspect of her job. “I wasn’t getting out into the towns as much as I wanted to, but the other parts of my job definitely needed to get done,” she said.

Crowley had decided to hire Abby Ingraham, of Bristol, to take over the portion of the job she couldn’t do when she received the news that the tumors had spread to her lungs.

With the new, rapidly growing tumors, Crowley was told she had months to live. At that point, she told the LCTV board she would be departing her position.

At the end of the week, Crowley will move to Marshfield, Mass. to live with her sister. She said she looks forward to reuniting with some old friends in Massachusetts, but will miss the friends she is leaving behind in Lincoln County.

“It seems that as people get older, their circles of friends shrink, but mine’s been just the opposite, it’s just continued to expand,” Crowley said. “I’m so blessed to have met so many wonderful, amazing people here, and I will miss them.”

Crowley filmed a special episode of the LCTV program “Spotlight on Seniors” hosted by Steve Raymond, during which she talks about her diagnosis and confronting death. To watch the episode, go to vimeo.com/239185353.