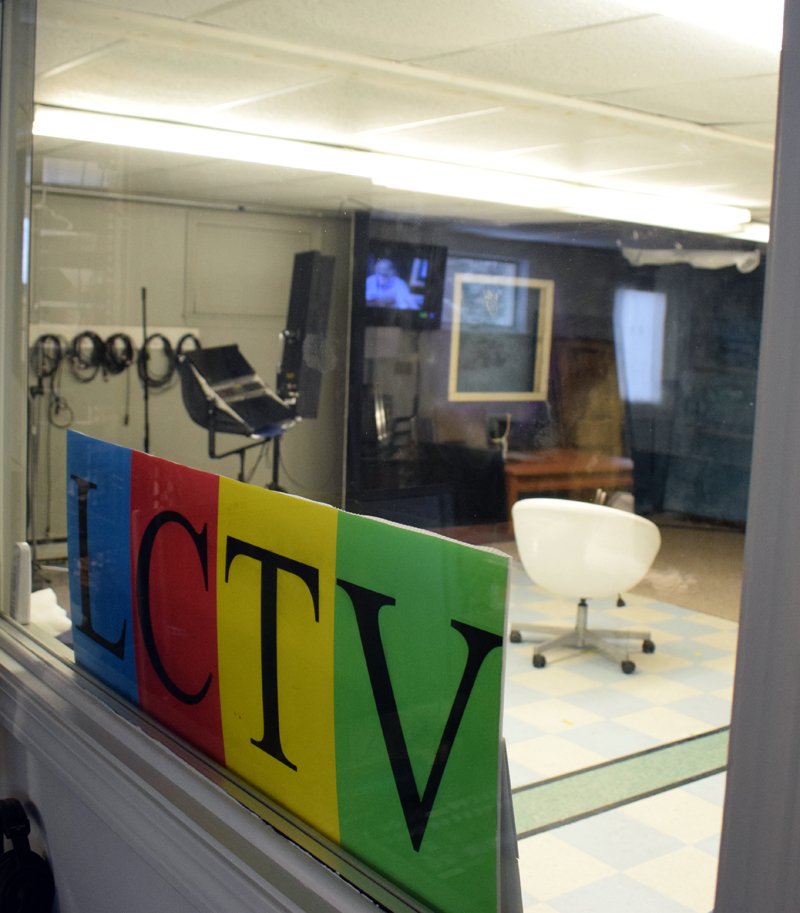 A view into the Lincoln County Television studios Wednesday, Dec. 18. The public access station is shifting its focus after some personnel changes. (Evan Houk photo)

Lincoln County Television, the Newcastle-based public access station, has reversed a recent name change and begun a search for a technical director to lead the station into a new chapter in its history.

After the departure of Executive Director Stephen Popp on Dec. 4, the board wants to shift the station’s focus back to the community it serves.

“We want to take what we’re doing and do it well. It’s all about clarity, transparency, and visibility,” said Larry Sidelinger, president of the Lincoln County Television Board of Directors.

“It’s a great organization that has been around 20 years and I’m sure that these changes will bring about some positive things for the future of LCTV,” Popp said in a phone interview. He had been executive director since Oct. 1, 2018.

The first step in the process was to reinstate the name of Lincoln County Television.

In August, the station announced a name change to Lobster Coast Television. Popp envisioned the change as a way to enlist towns from outside Lincoln County to support the station.

Marva Nesbit, vice president of the board of directors, said the name was never legally changed and now it will remain Lincoln County Television.

Sidelinger and Nesbit are also taking steps to engage more with the towns in Lincoln County that the nonprofit station serves. Sidelinger said they plan to open the lines of communication and gather feedback from towns about what LCTV can do better.

They met with the town administrators of Bristol and Newcastle and the town manager of Damariscotta on Dec. 10, a meeting Nesbit described as “overwhelmingly positive.”

During the meeting, they agreed to send someone to the Bristol town office to repair the camera that records public meetings.

Also at the meeting, Damariscotta Town Manager Matt Lutkus signed on to make a show that will update viewers on the town’s waterfront reconstruction project.

LCTV is primarily funded by the towns it serves, which give the station a portion of the franchise fees they receive from cable TV providers.

The providers, such as Spectrum, pay franchise fees of up to 5% of their revenue from cable service in the municipality.

LCTV requests a contribution from each town based on its population and number of cable customers, but each town determines how much of its franchise fees to send to LCTV, or whether to support the station at all.

Sidelinger said he hopes to change this by engaging more with the towns.

Another important issue for Sidelinger is reinstating LCTV’s place on channel 7 for Spectrum customers.

In November 2017, Spectrum announced the move of LCTV from channel 7 to channel 1301, requiring customers to have a digital receiver in order to view the channel. LCTV is still available on channel 7 through Nobleboro-based Tidewater Telecom Inc., which offers an internet protocol television service.

According to the Community Television Association of Maine’s website, the governor signed a bill, L.D. 1371, into law earlier this year that will force cable providers to return public access stations to their original channels.

LCTV also recently said goodbye to Hunter Reid, its young technical director, who resigned because of a move to Brunswick.

During the transition period, former Technical Director Dave Svens has come out of retirement. Working as a consultant, Svens will help right the ship and work out some technical kinks in the studio. The station has brought in a technical engineer to help.

Sidelinger said the next technical steps will involve working on the website and beginning to post videos in the on-demand section of lctv.org again.

After a month-long hiatus, the long-running “Wuzzup News,” hosted by Sidelinger and Bobby Whear, returned to the air Dec. 11.

Nesbit plans to film new episodes of her show, “Community Conversations,” and has several ideas for future guests.

In addition to franchise fees, LCTV relies on donations and plans to hold a series of fundraisers in the new year. The station is planning a concert series at the Lincoln Theater during January, February, and March.

Sidelinger said details about the concerts and where to get tickets will be available in the coming weeks.

Sidelinger said LCTV hopes to raise funds toward the hiring of a new, full-time technical director and for the purchase of new equipment to replace the 30-year-old cameras in the studio now.

The station also needs new battery backups to protect all the sensitive computer and technical equipment in the studio.

LCTV will broadcast some locally flavored holiday specials in the week ahead, including a music special with a pair of local musicians, “Christmas Carols with Chris Hight and Annette Rundall.”