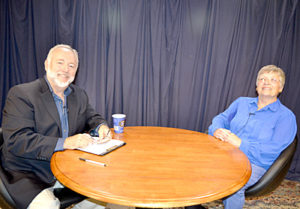 Steve Raymond and Beth Parks prepare to tape an episode of “Spotlight on Seniors” at the Lincoln County Television studio in Newcastle on June 28. (Christine LaPado-Breglia photo)

After a sound check and a few pre-interview bits of advice from “Spotlight on Seniors” host Steve Raymond, 74-year-old Corea resident Beth Parks was ready for the June 28 taping of her appearance on the Lincoln County Television interview series produced and hosted by Raymond at LCTV’s Newcastle studio. Raymond is also the director of home care and community outreach at The Lincoln Home in Newcastle.

Parks was a U.S. Army captain and a MASH-unit operating-room nurse in Cu Chi during the Vietnam War when she was just 24 years old. She is also a breast-cancer survivor, a wildlife photographer, Newcastle studio. Raymond is also the director of home care and community outreach at The Lincoln Home in Newcastle.

Parks was a U.S. Army captain and a MASH-unit operating-room nurse in Cu Chi during the Vietnam War when she was just 24 years old. She is also a breast-cancer survivor, a wildlife photographer, getting enough sleep,” she said, noting that it was routine to be on one’s feet for 72 hours at a time without a break – “not even to go to the john, so you didn’t drink anything.”

Of the effect of dealing with so much injury and death, Parks shrugged it off, saying she was so focused on doing her job that she could not think about anything else but working on her patients. After the war, she said, she “would think about their lives.”

Poignantly, at one point in the taping, Parks recalled visiting the Vietnam Veterans Memorial in Washington, D.C. and not recognizing a single name.

During the interview, Raymond brought up the character of Margaret “Hot Lips” Houlihan, famously played by actress Loretta Swit in the television series “M*A*S*H.”

“Was that an insult?” Raymond asked Parks.

“I don’t want to tell those stories,” Parks said, before the conversation shifted to her world travels and her vast body of photographic work. Parks has visited 62 countries. On her most recent trip, she was “chasing walrus in the high Arctic,” she said.

In a telephone interview several days after taping the “Spotlight on Seniors” segment with Parks, Raymond said he was attracted to her as a guest because of her life experience.

“I’m always interested in the wisdom and different perspectives that senior individuals bring forward,” he said of Parks and the guests he seeks for the show in general. “I’m interested in expanding the cultural beliefs around aging.”

“The fact that she’s her age and she does everything she does” serves “to challenge people’s ideas about what aging is,” said Raymond.

Raymond is planning a show focused on opioid addiction from a number of perspectives, as well as an interview with Marcus Hutchins, the former economist and hedge-fund manager who pens the “Coastal Economist” column in The Lincoln County News.

To watch Parks’ “Spotlight on Seniors” interview, go to lctv.org/spotlight-seniors-beth-parks. To watch past episodes of the show, go to lincoln-home.org/spotlight-on-seniors-television-show-episodes.

For more information about LCTV, go to lctv.org. The LCTV studio is located at 29 Sheepscot Road in Newcastle.

The Knox Museum, also known as Montpelier, is located at 30 High St. in Thomaston. For more information, go to knoxmuseum.org.

Learn more about Parks and view her photography at bethparks.com.