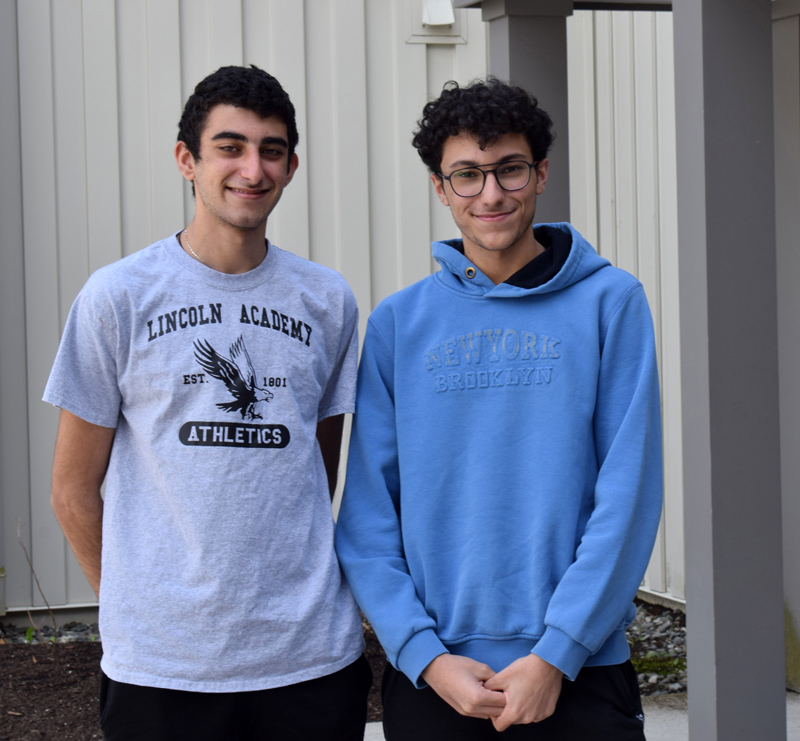 Lebanese students Ralph (left) and Marc Zoorob stand outside their dorm at Lincoln Academy in Newcastle on Thursday, May 6. Sons of the archdeacon of Lebanon and Syria in the Episcopal Church in Jerusalem, they are attending LA with assistance from the Episcopal Diocese of Maine. (Evan Houk photo)

After several months of fundraising and a more than 5,000-mile journey, the two sons of a Lebanese archdeacon in the Episcopal Church are now studying at Lincoln Academy, thanks to the efforts of local Episcopalians.

Marc and Ralph Zoorob are in their junior and sophomore years at LA, respectively. They arrived shortly after the start of the third trimester and are adjusting nicely to life in Maine.

“It feels like home,” Ralph Zoorob said during an interview May 6.

Marc added that everyone has been welcoming and friendly, especially in the LA community.

Newcastle resident Heidi Shott first heard of the Zoorobs’ plight last fall through her work with the American Friends of the Episcopal Diocese of Jerusalem.

During a Zoom call in September with the Ven. Imad Zoorob, archdeacon of Lebanon and Syria in the Episcopal Church in Jerusalem, he discussed the increasing precariousness of the situation in his home country. The situation had been exacerbated by an explosion on Aug. 4, 2020 in his family’s home city of Beirut.

With prospects in Lebanon dim, he expressed a desire to send his sons away to school so they could have a chance at a promising future.

Marc said that when the explosion happened, it “felt like an earthquake” and knocked everyone to the floor. He said they were worried about their mother, who was at a hair salon in the city where the windows shattered at the time of the explosion. Luckily, she was safe.

“The scariest part was trying to find out if all your friends were alive,” Marc said.

Hundreds were killed, thousands were injured, and the blast left many homeless. A large amount of ammonium nitrate had exploded in the Beirut port, sparking a two-week emergency declaration by the Lebanese government and protests across the country. The exact cause of the detonation is still under investigation.

The explosion compounded growing problems with political instability and currency devaluation. Shott said the value of the Lebanese pound has dropped by 85%.

She told the Episcopal News Service that this has resulted in a liter of milk jumping in price from the equivalent of $6 to $50. This inflation, among other factors, spurred her to start the fundraiser.

Shott consulted with Lincoln Academy and Bishop Thomas Brown, of the Diocese of Maine, and set a goal of $100,000 to cover travel expenses and the remainder of the Zoorobs’ tuition through graduation, after scholarships.

Shott said that donations have come in from 59 congregations in the Diocese of Maine and fundraising is ongoing.

She said a group from her home church, St. Andrew’s Episcopal Church in Newcastle, has provided food and dorm room essentials.

“I think the rationale for this is, there’s so many huge problems in the world, you feel sort of overwhelmed about what one person can do. But this is something we can do to help two people have a better life,” Shott said during a phone interview Monday, May 17.

Marc and Ralph said they had always dreamed of studying in the U.S., but never thought it would happen.

“We’re thankful for what everyone did. … It’s like a one-in-a-million opportunity,” Marc said.

Ralph is on the tennis team and plans to play basketball next year. Marc plans to run track and play piano.

The brothers plan to visit their family in Lebanon over summer break, but will return in time for next school year.

Both plan to seek scholarships and attend college in the U.S. after graduation.

Jake Abbott, dean of students and director of residential life at LA, said by email that Marc and Ralph are a joy to have at the school.

“They are positive, outgoing, and full of energy for life. Having them here seems to have brought a new level of energy to our group,” Abbott wrote.

Donations for the Zoorobs’ tuition can be made at lebanontolincoln.com.