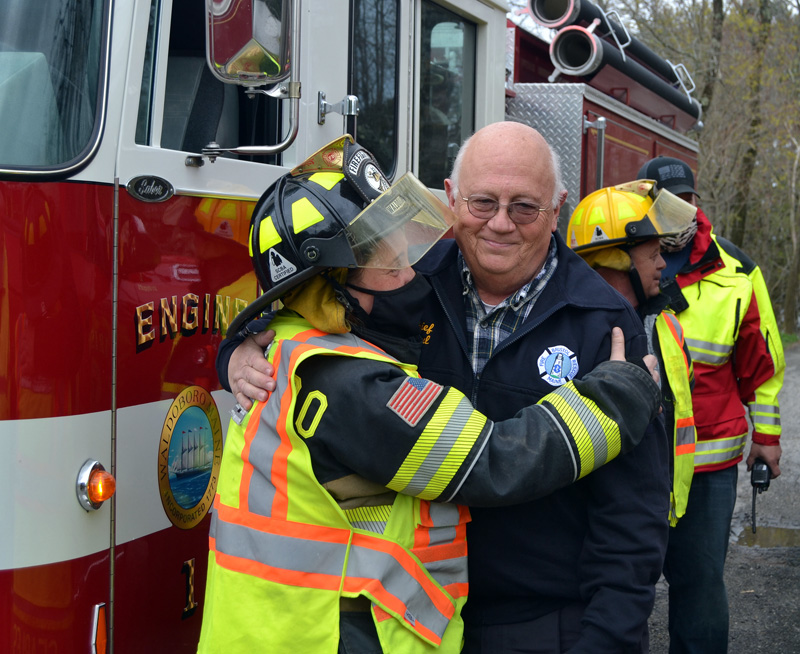 After 11 years as Bristol’s fire chief, including 2 1/2 years as the town’s first full-time fire chief, Paul Leeman Jr. hung up his white helmet Saturday, May 1.

“I consider myself at the top of my game, and I don’t want to slide down to the point where people would ask, ‘Would you please step down?’” Leeman said. “I feel 45 years old, but the reality is, I’m going to be 70 next year, and Father Time doesn’t go backwards well.”

Leeman has logged more than 50 years of service with Bristol Fire and Rescue and his family’s history with the department goes back to its beginning. 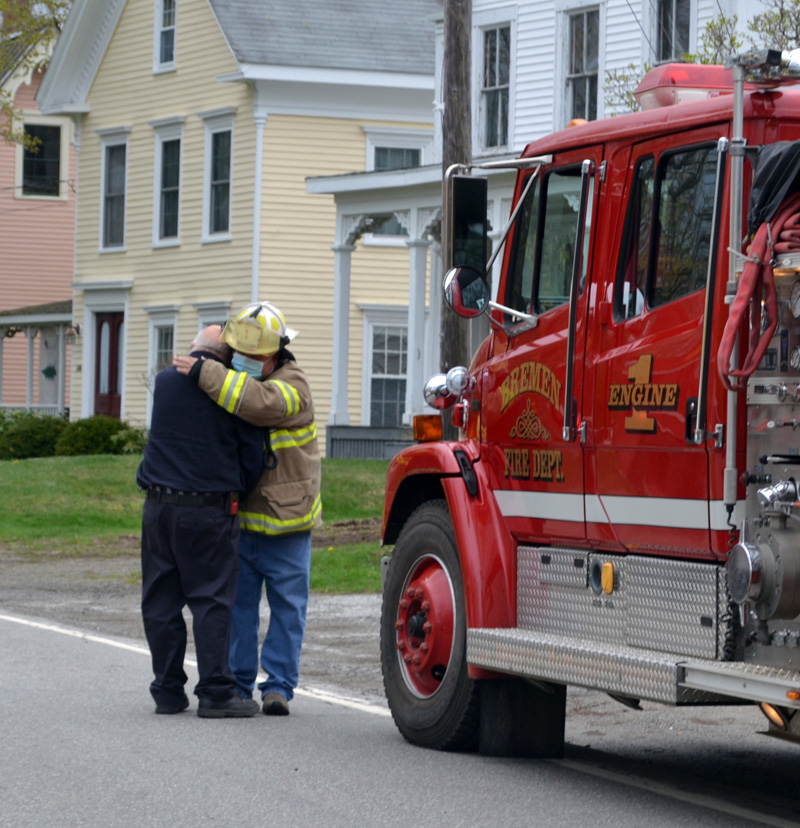 Leeman officially joined the department as a teenager, during “a different time” for the volunteer fire service.

“It was before there were all of the restrictions and mandatory trainings,” Leeman said. “I was on the department for 15 years before I had a pair of boots.” 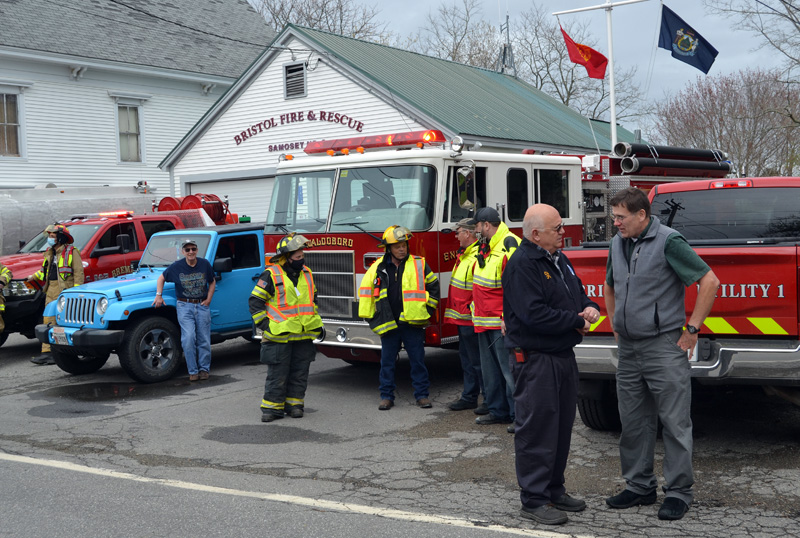 Bristol Fire Chief Paul Leeman Jr. (second from right) talks with Bristol Board of Selectmen Chair Chad Hanna outside the Round Pond fire station on Friday, April 30. Firefighters from around the county gathered in the village to mark Leeman’s retirement as chief. (Maia Zewert photo)

As time went on, safety standards for firefighters changed. Leeman became the department’s safety officer, a position he held for over 20 years.

“I do understand why we had to graduate to the same safety regulations as paid, full-time departments,” Leeman said. “It’s made for some very good firefighters on these small departments who are just as capable as the firefighters in the cities. All of the departments in Lincoln County have really stepped up to the plate.”

“You realize that weight that is on your shoulders. You never dreamt it would be so heavy,” Leeman said. “It took a while to get used to that.” 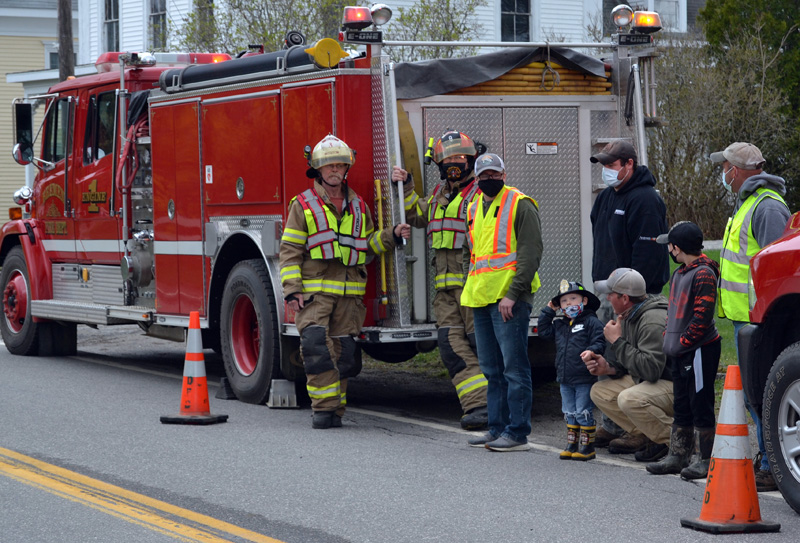 Leeman credited the depth of Bristol Fire and Rescue for helping him adjust to the role. He described his style as “leading from the side,” recognizing the strengths and skills of others and letting them shine, rather than micromanaging.

“I really try to surround myself with people who are smarter than I am,” Leeman said. “I thought I was supposed to know everything, but you can’t. No one can. You have to learn to rely on the skills of others.” 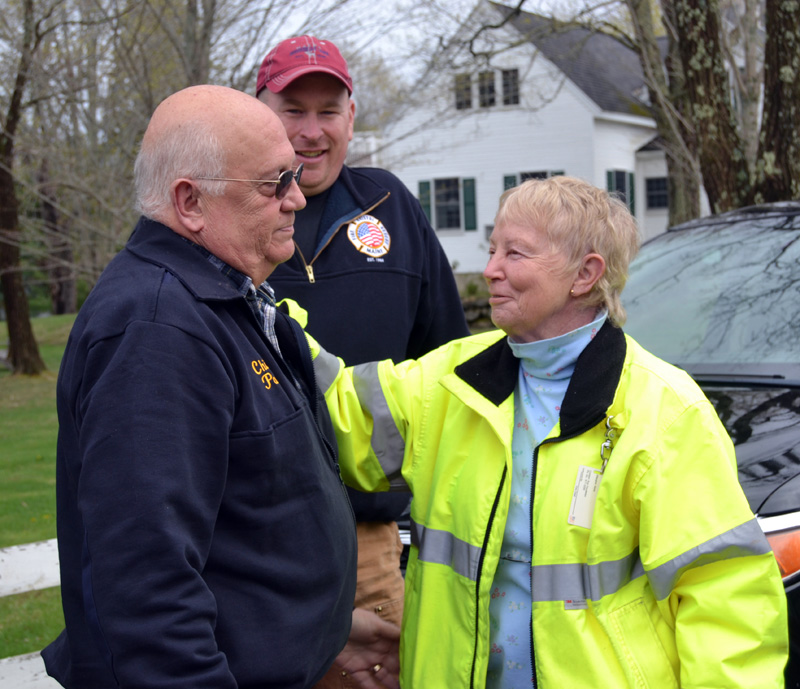 As he adjusted to the role of chief, he continued cooking at the University of Maine’s Darling Marine Center in Walpole, another lifelong passion. He worked as a chef for more than four decades and owned the Samoset Restaurant in New Harbor prior to his work at the Darling Marine Center.

Leeman cooked 40-60 hours a week during the busier times of the year, but he was able to keep up with the chief’s work.

Fire trucks from Newcastle, Bremen, and Damariscotta, with an ambulance from the Central Lincoln County Ambulance Service, line Route 32 in Round Pond the afternoon of Friday, April 30. The display honored Bristol Fire Chief Paul Leeman Jr. on his last day as chief. (Maia Zewert photo)

“But there was always more to be done,” Leeman said. “I got to a point where I found myself nights and days off working on my chief stuff and neglecting chores at home.”

Leeman explained the situation to the department’s membership, which approached the Bristol Board of Selectmen. At annual town meeting in March 2018, Bristol voters agreed to hire a full-time fire chief. Leeman stepped into the position Nov. 5, 2018. 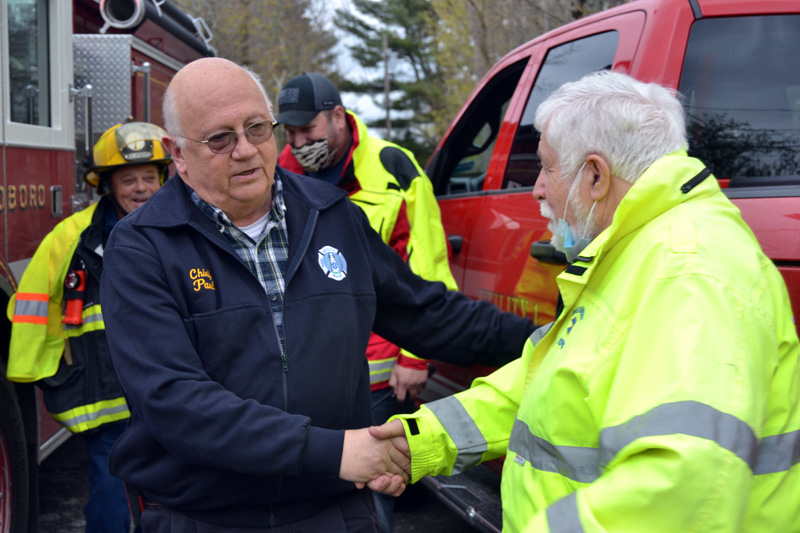 “It was a tough spot to be put in as the first full-time fire chief, but he handled all the political pressure well and got us on the right track here,” said Chad Hanna, chair of the board of selectmen. 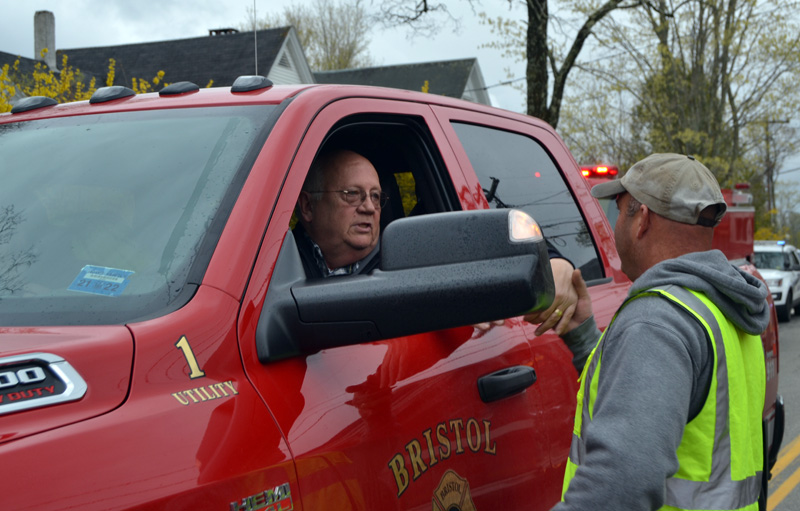 One of the highlights of Leeman’s tenure of chief is the town’s Safety and Health Award for Public Employers. Given by the Maine Department of Labor’s Bureau of Labor Standards, the award recognizes public-sector employers who meet high standards for safety and health policies and procedures. All of Bristol’s municipal departments earned the award, a rare feat, Leeman said.

Another initiative is the installation of reflective address numbers that help responders locate addresses more easily. So far, over 1,200 signs have been installed in the town.

“We have enough in town so that there are very few roads that there isn’t at least one reference point,” Leeman said, “but we still have a long way to go.” 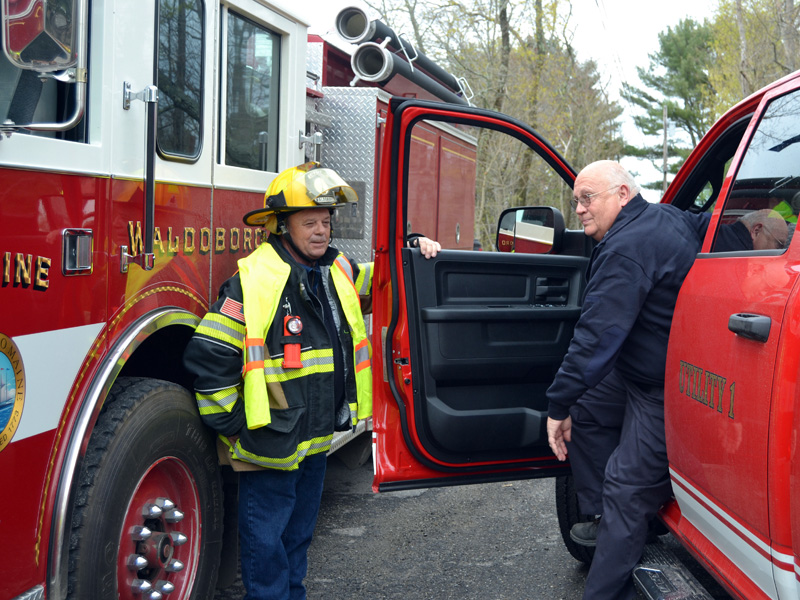 Leeman was quick to credit the successes to the collective efforts of the department. However, he spoke about his “failure” personally.

“One thing I really failed at … was increasing our membership, especially adding younger members,” Leeman said. “I’m really hoping with the younger leadership and younger members … they’ll be able to maybe attract more people than some old duffer sitting at the head of the department telling war stories.”

Leeman began to consider stepping down in November, after he realized he felt excitement rather than dread at the thought of retirement. He soon informed the fire department and the selectmen that he would retire at the end of April. 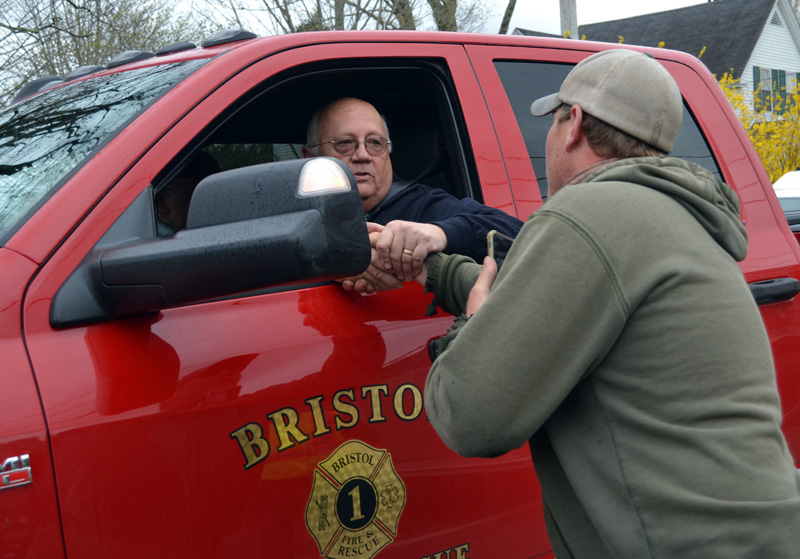 Bristol Fire Chief Paul Leeman Jr. shakes hands with Capt. Chris Hilton, of the Damariscotta Fire Department, during a surprise celebration of Leeman’s retirement on Friday, April 30. Leeman was overcome with emotion as he was congratulated by a line of firefighters and other emergency workers while driving to the Round Pond station. (Maia Zewert photo)

“We appreciate Paul’s sheer dedication to the job, his love of the town, and the effort he’s put into it over the years,” Hanna said. “I’m sure it will continue.”

Leeman’s dedication to the fire service extends far beyond the borders of Bristol, according to Jefferson Fire Chief Wally Morris. 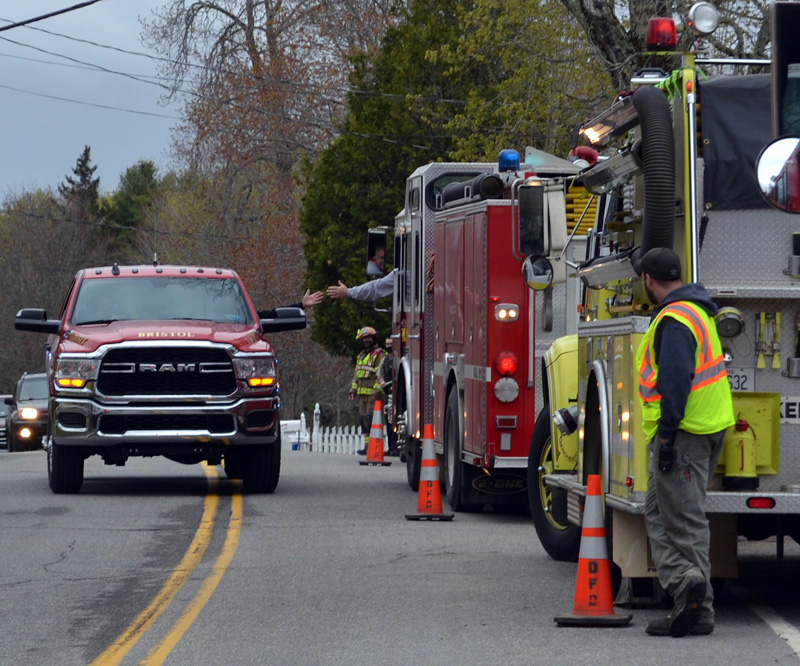 “Paul is a much-respected fire chief who has definitely been an asset to fire service in Lincoln County,” Morris said. “He’s not only a leader for Bristol Fire and Rescue, but he’s also a leader to all departments.”

Morris recalled a training exercise in October 2019, when Bristol Fire and Rescue burned the old pavilion at Pemaquid Beach. The Jefferson department had some firefighters who needed to complete a live fire training exercise to become certified, and Leeman invited them to participate.

“He is just that type of guy, one who’s always willing to help out,” Morris said. “He’s always been a big proponent of training, and has always provided guidance, insight, and experience with the entire fire service of Lincoln County.”

As of midnight, May 1, Scott Sutter Jr. took over as Bristol’s fire chief. Leeman is now Bristol firefighter No. 13, a number he chose for sentimental reasons. 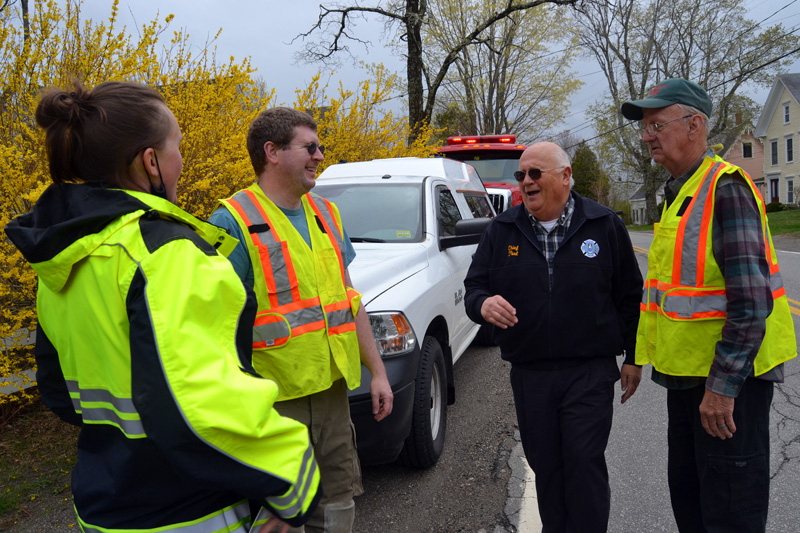 Leeman will help Sutter ease into the role of chief during the month of May. He plans to spend more time with his grandchildren and great-granddaughter, clean up some land he has had for years, and maybe find a low-stress per diem job.

He also plans to stay with Bristol Fire and Rescue for as long as he can.

“I’d like to stay on until death do us part,” Leeman said.