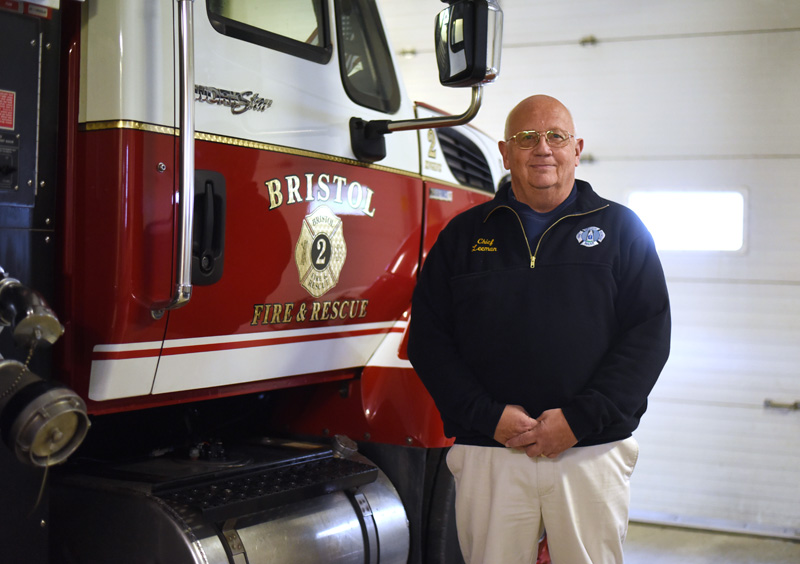 Leeman, of Round Pond, has been chief since 2010, but the town made the position a full-time job at the annual town meeting in March.

Leeman has belonged to the fire department most of his life.

His grandfather, Clifford Leeman, helped establish the fire department in the mid-1940s. His father, Paul Leeman Sr., was assistant chief from 1965-1987.

Leeman officially joined the department at the age of 17 in 1969 – making next year his 50th – but he had been helping there since he was around 14 years old.

To Leeman, service on the department is about “family and heritage,” he said.

“It was just what kids did, giving back to the community, helping,” he said of starting as a teenager. “Especially with woods fires: if you were old enough to carry a water pack, then you could go in.”

Leeman is only the fourth chief of the department.

“They set the bar high,” Leeman said of his predecessors while looking at their photos on the walls of the Round Pond station.

A chef for 45 years, Leeman has been performing the duties of fire chief in addition to his full-time job, working nights, weekends, and vacations. He received a yearly stipend and hourly pay for trainings, meetings, and calls.

He retired from cooking at the Darling Marine Center in Walpole this summer after 17 years on the job. Before going to work at the Darling Center, he owned the Samoset Restaurant, now The Harbor Room, with his father for 24 years.

“I’m sort of going to have to pave the way as I go,” Leeman said of becoming a full-time chief and spreading his time between the town’s three fire stations. He plans to spend one day a week at the Bristol Mills station, one or two days a week at the Round Pound station, and the rest of the week at the New Harbor station, which houses the department’s rescue vehicle,  so he is readily available for medical calls.

“I want (the stations) to be available, or accessible to the townspeople, so that if I’m here they can come in and see what we have and what we’re doing,” he said.

“I enjoy paperwork … I enjoy budgets, numbers crunching, obviously the fellowship of it,” Leeman said of the position. “They equate it to being like a conductor of an orchestra. You just sort of hold the unit together.”

The department currently has 38 members, including firefighters and first responders.

“I want to be accountable to the taxpayers because they are stepping out on a limb. It’s a costly position,” Leeman said. “There’s a lot I know I can do, but I have a lot to prove to the townspeople that it’s needed.”

“Now I can go ground level and really dot my i’s and cross my t’s to make sure that our records are kept and the reports are done, the stations are maintained,” he said. “I’ll stay very busy.”

Leeman said the town needs a full-time chief due to the administrative workload, as well as the number of calls that come in.

He estimated that the department will have responded to over 420 calls by the end of the year.

“I’m excited about being in town and available more than I was when I had to work out of town, even though I was just 11 miles away,” he said.

Leeman said he would like to spend more time at Bristol Consolidated School, and maybe serve some lunches there. His goal is to promote safety and community service, and to get children comfortable with firefighters.

Leeman said he is proud of the way towns in Lincoln County work together, such as when neighboring departments provide mutual aid in emergencies.

“We all help each other along,” he said. “I’m proud of what we have for a county.”

Leeman said he is excited about the new fire training facility being planned for Damariscotta.

He is proud that Bristol’s municipal departments have been awarded the Safety and Health Award for Public Employers by the Maine Department of Labor’s Bureau of Labor Standards since 2014. The award recognizes public-sector employers who maintain an exemplary safety and health management system.

“It just shows that you really care about the safety of your workers,” he said.

Leeman was the first safety officer in Lincoln County and held the position for 20 years until becoming the fire chief. He is still Bristol’s emergency management agency director and the town’s compliance director. The compliance director ensures that employees in each of the town’s departments have the training they need and that each department complies with labor standards. Leeman also inspects the town’s buildings.

Of why he likes his work on the fire department, Leeman said he enjoys helping people.

“I enjoy providing comfort,” he said. “People can stay in their homes knowing somebody is out there to help them.”