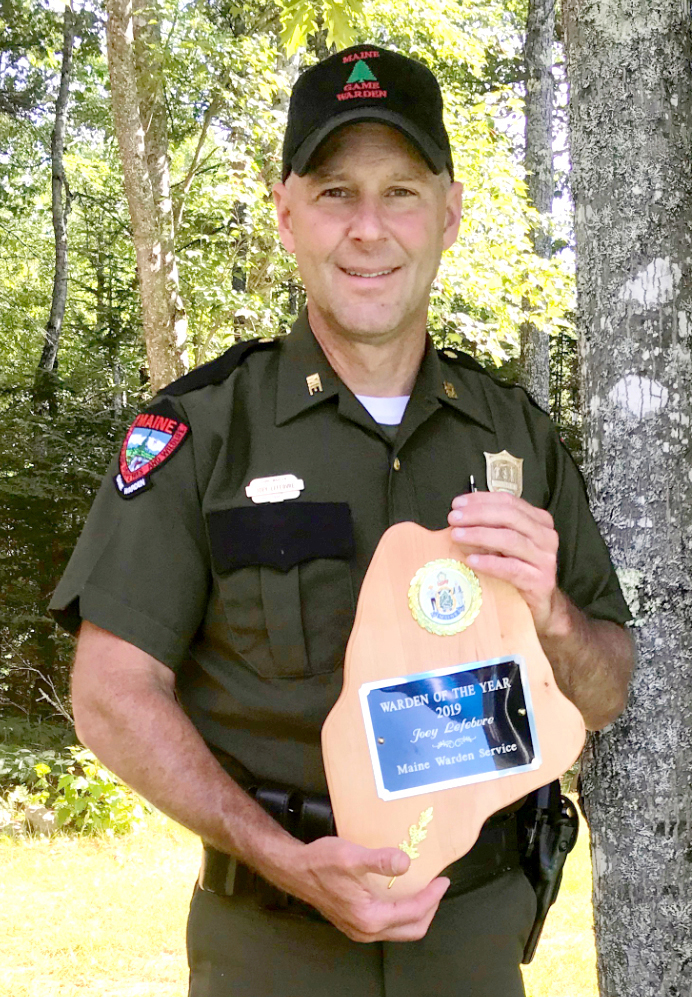 Joey Lefebvre has been named the Maine Warden Service 2019 Warden of the Year. He has been a warden for 25 years. (Photo courtesy Renee Thivierge)

Maine Game Warden Joey Lefebvre was named the Maine Warden Service’s 2019 Warden of the Year on Thursday, June 25. Lefebvre, who has been a game warden for 25 years, mostly in Lincoln and Knox counties, said this is his final year.

The award was presented at the Maine Criminal Justice Academy, as the agency’s annual banquet was canceled due to the COVID-19 pandemic. It is presented to a member of the Maine Warden Service who has consistently conducted themselves in such a manner as to display an exceptional expertise in the areas of conservation law enforcement, management, community and public relations, and all aspects of a game warden’s duties, and during the past year has reflected continued performance in this manner.

Being a warden, or any law enforcement officer, can be a bit of a roller coaster ride: one minute joyful, another minute humorous, and another sad.

Lefebvre said he was presented the award for his accumulative long-term service; for his good cases and good service.

He said some of the biggest cases he dealt with in his long and storied career involved going undercover on poaching cases outside his patrol area. His undercover work involved hunters taking multiple deer, night hunting, illegal drugs, and trafficking. Going undercover meant being away from his family for extended periods of time, going to remote areas, and living in a tent or camping trailer. “Those days are over,” he said.

Of all his assignments, the toughest thing he has had to do is notify family members of a death, especially the death of a child.

“We deal with a lot of deaths. The hardest thing is dealing with children and their innocent deaths. They are not often, a couple a year, but they are the hardest, especially when you have kids of your own. It brings it back home. You notify the family and witness their grief. It happens again and you go through it again,” he said.

Deaths he has had to deal with include drownings, hunting accidents, ATV and snowmobile accidents, and suicides.

Lefebvre said the “best part of his job is saving someone’s life. That has happened a number of times in my career.” He has saved people from drowning and rescued people lost in the woods, suffering from exposure.

“It happens way more than children dying. We respond to a lot of search and rescue calls, a missing child, and missing elderly with Alzheimer’s. It is always nice to find them before they pass away from the elements,” he said. When a report of a missing person comes in, wardens respond from all over the state.

When asked what was the funniest thing he ever saw on the job, Lefebvre burst out laughing. “I’ve seen a lot of humorous things. You run into people in their finest hours, way out in the middle of nowhere,” he said.

In one case in Lincoln County, someone reported that a hunter had set up a tree stand on their property without permission. The hunter had also set up a game camera without the landowner’s permission.

Lefebvre set up a game camera too, but the hunter spotted Lefebvre’s game camera, so the hunter climbed the tree and removed the camera’s card.

Lefebvre followed the hunter’s tracks back to his residence and picked up a blaze orange hat along the way. The hunter was charged with an illegal tree stand, hunting with bait (apples), and a revocation of his license. He was also hunting on a Sunday. The hunter was told to stay out of the woods because his license was under revocation.

Lefebvre kept the hat as evidence, but offered the hunter a blaze orange Maine Department of Inland Fisheries and Wildlife hat, on which the logo took up the entire front of the cap. “He gladly accepted it,” Lefebvre said.

Four days later, Lefebvre went back to the same spot to retrieve his game camera and found new images of the hunter. “There he was with the bright IF&W hat on. He said, ‘I know, I know.’ He got a couple of more tickets, less than three days after the first,” Lefebvre said.

Lefebvre has encountered every kind of wildlife imaginable and was once chased by a bull moose.

“It was the scariest moment in my career,” he said. The moose chased him a few hundred yards, but “it felt like miles,” he said. He was able to run away into the woods. He has also been chased by cow moose with their calves, who “also tried to get the best of me,” and has been charged by a black bear.

In his 25 years on the job, he only had to put down one wild animal that charged him, and that was a mortally wounded black bear. The bear had been shot by a farmer after it attacked his farm animals. “When I got close to it, it turned on me and came back on me growling. I had to put it down,” Lefebvre said.

The biggest change Lefebvre has seen in his career is an increase in ATVs and recreational boating.

“It goes up every year, all-terrain vehicles especially. The state is providing funding from ATV registration fees to put trails in. When I first started, there were not many ATVs. There were a few three-wheelers then. Now there are four-wheeled ATVs and side-by-sides. With that comes a lot of accident investigations,” he said.

Lefebvre never got a tick bite until about eight years ago. Since then, he has been bitten dozens of times on the job.

“It has gotten worse every year,” he said. As a result, he has chronic Lyme disease, for which he was treated with antibiotics for three years. He is no longer on medication and called the disease “suppressed.”

“I am in that period waiting to see what happens. I still have it, but it is nowhere near as bad as it was,” he said.

His advice to others is, “Despite the obvious, if you are going to recreate in Maine, alcohol and recreation do not mix.” He has seen more than his share of alcohol- and speed-related accidents, including those resulting in death.

A press release from the Maine Warden Service states the following: “After a short time working in a remote portion of northwestern Maine beginning in 1995, Lefebvre transferred to the coast, where he has been the district game warden in the Damariscotta region since. It is here that Lefebvre continued his relentless pursuit of intentional fish and game violators in the Midcoast. Lefebvre never leaves stones unturned while investigating fish and game violations or incidents.

“Lefebvre excels at investigating illegal deer-hunting, to include those who exceed the bag limit, hunt in closed season, and continue to hunt while under revocation. Because of his unique skill sets, he has been able to uncover some of the most high-profile fish and game violations that have occurred in the state throughout his career.

“Lefebvre has been an instrumental part of training and mentoring many new game wardens. In his career, he has mentored several deputy game wardens, was cadre for the 96th Municipal-County Basic Police School at the Maine Criminal Justice Academy, and was cadre for the Advanced Warden School.

“Lefebvre’s job and life experience, dedication, knowledge, and, most importantly, his positive attitude, are invaluable to a new game warden starting out in their chosen profession. He has had a direct impact on the future of the Maine Warden Service.

“Lefebvre’s exemplary service and work performance have been well documented throughout his career. He has received several letters of recognition from both the public and the Maine Warden Service, and does an excellent job collaborating with other law enforcement agencies, utilizing his strong skill sets to bring positive resolution to many issues.

“Because of his knowledge of his patrol area and the districts that surround it, Lefebvre is called to numerous search and rescue incidents every year in his area. He has been able to bring many people home to their loved ones over the years.

“Lefebvre balances an extremely busy professional and personal life and sets a good example for other wardens who are in similar positions with their personal and professional lives. He retains his oath that he took as a newly hired game warden and continues to go to work every day to make a difference in the outdoor community in which he lives and works.”