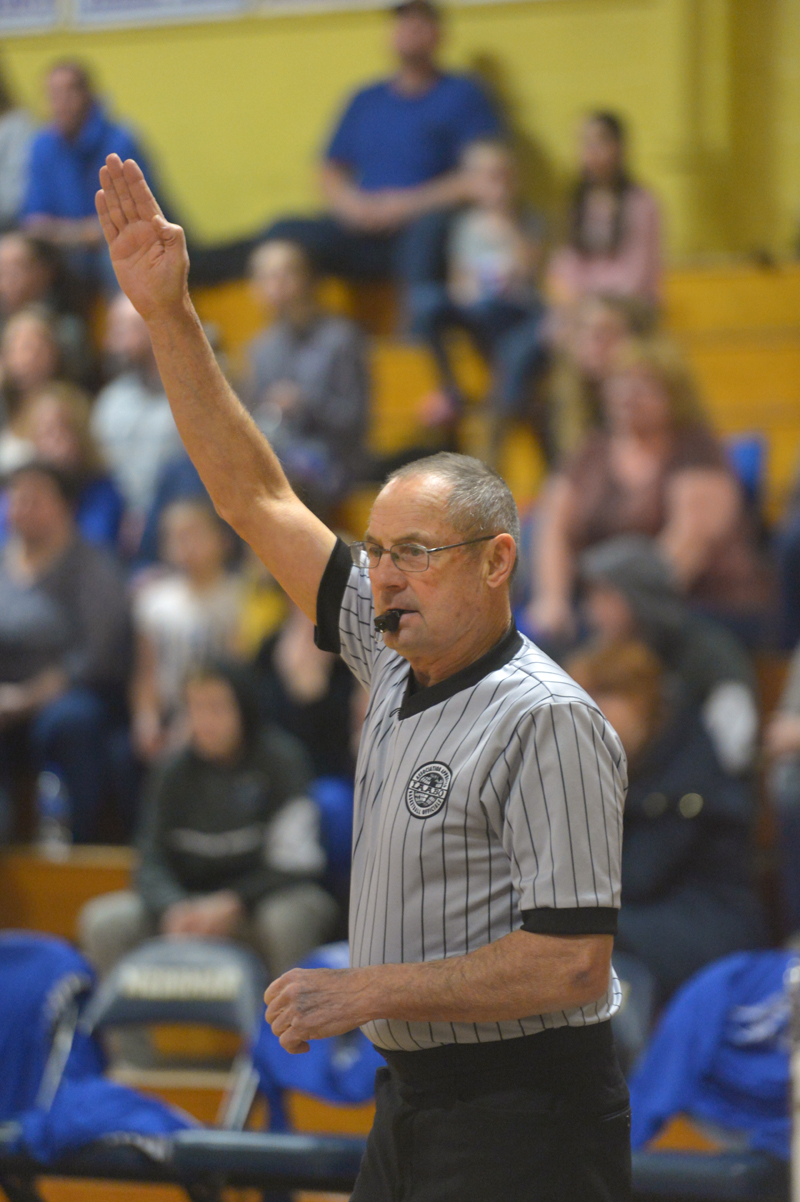 Born in 1942, Walt Gorneau is one of the oldest officials in the state refereeing varsity basketball games. (Paula Roberts photo)

Legendary official Walt Gorneau, of Wiscasset, has been pounding the hardwood for 46 years as a basketball official. He has equally impressive numbers officiating soccer and baseball games.

Gorneau starting refereeing basketball games in 1972. The International Association of Approved Basketball Officials Inc. recognized him a year ago for “45 years of dedicated service, leadership, and commitment, exemplifying the best in IAABO and the game of basketball.”

“I love sports,” Gorneau said of why he became an official. “I played football, basketball, and baseball.”

Last fall, Gorneau surpassed the half-century mark as a soccer official. He has officiated high school soccer for 51 years and was on the collegiate soccer board for 47 years.

In 2015, the Mid-Coast Board of Approved Soccer Officials presented him with the second annual Bob White Award. Gorneau was a state evaluator of class one officials for many years.

A hip replacement in 2009 has not slowed him down.

“I have been very fortunate health-wise,” Gorneau said. “My knees are great. I feel great. As long as I feel good and can keep up with the present-day officials, I am going to keep going.”

Gorneau is one of the oldest basketball referees in the state still officiating at the varsity level.

“The problem is, there are no young guys coming in to take our place,” he said. “You will never be able to replace old-time officials who will go anywhere, anytime.

“It’s a tough situation we are in, throughout the state and throughout the country. Every sport and every board needs new referees, especially females. Every board is trying to recruit new officials.”

Gorneau was born in Fort Fairfield in 1942. He grew up in Gardiner and attended Hallowell High School, graduating in 1960. He played on Hallowell’s co-state champion football team in 1959 alongside his two brothers, Jerry and Aurele.

While at Gray-New Gloucester, he met his wife of 51 years, Marilyn. 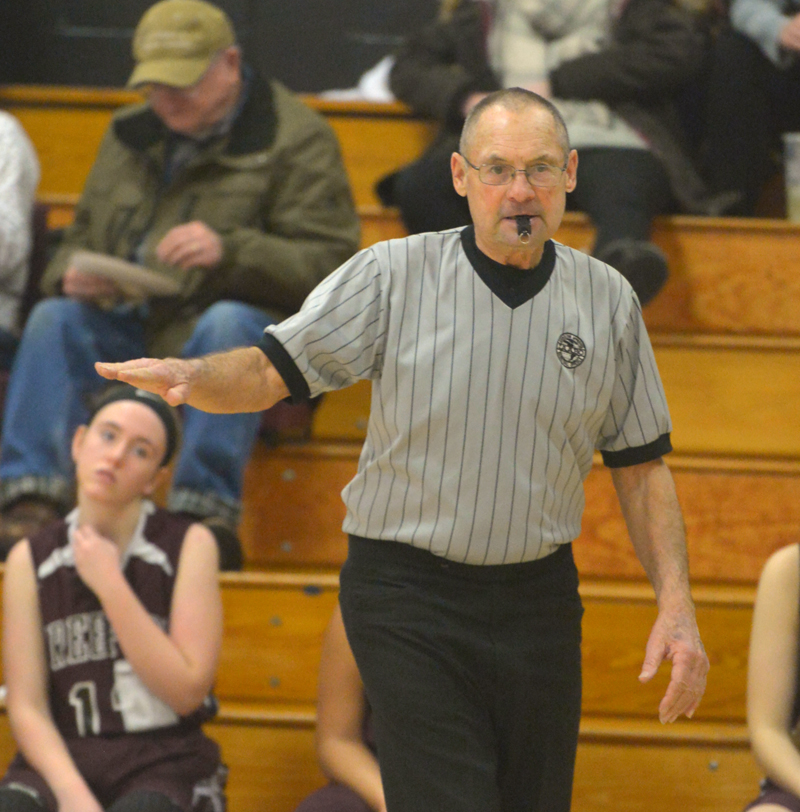 Walt Gorneau counts off the seconds to move the ball across half court during a recent basketball game at Lincoln Academy. (Paula Roberts photo)

“She is just a great, great wife. I could never have done it without her help and support,” Gorneau said of officiating all these years. “She is very understanding. I don’t think she has ever seen me referee a game.”

He started teaching driver education at Gray-New Gloucester during the summer months. After a stint at Boothbay Region High School, he took a full-time driver’s ed job at Wiscasset in 1981, “thanks to Maine Yankee.” He taught driver’s ed for 32 years, including 19 in Wiscasset.

In his coaching career, Gorneau “followed some legends.” 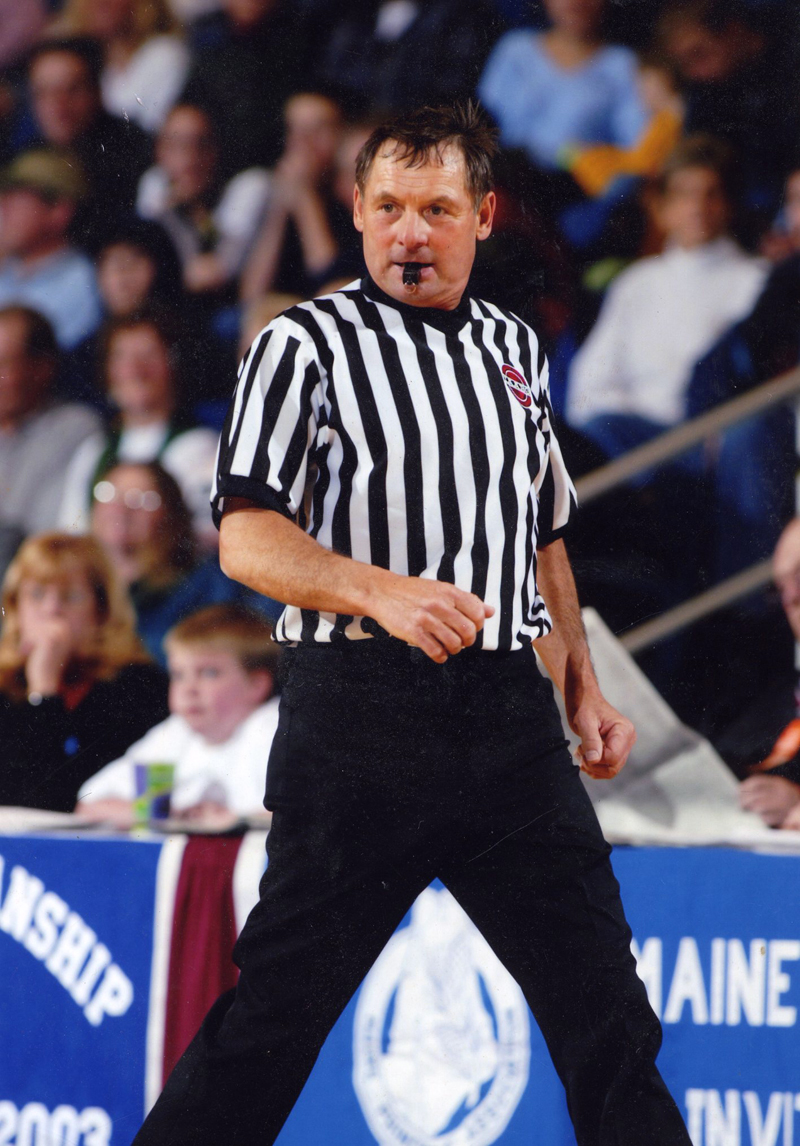 Gorneau then followed another legend, Keith Mahaney, at Boothbay. Mahaney would go on to coach and serve as athletic director at Husson College.

“I was very fortunate to get that job at Boothbay,” Gorneau said. He was athletic director at Boothbay for 12 years, coached varsity basketball for five years (1968-1973), and also coached golf.

“We went to the tournament every year,” Gorneau said. The tourney was held at Edward Little High School at the time.

Among his favorite coaching memories is his eighth seed Boothbay team almost knocking off undefeated top seed Mt. Abram in the quarterfinals. “We lost in the last minute,” he said.

Another favorite memory was taking on undefeated top seed Falmouth in 1985.

“We stalled the ball for the whole game and we lost 26-24 on a last-second shot,” he said. “We had them. They were too good, so we had to stall them.” Fans booed him throughout the game.

Gorneau launched his officiating career after he stopped coaching at Boothbay. He and Principal Joe Testa hired I.J. Pinkham, who still coaches the team today.

“I had a chance to coach against I.J. when he coached at Buckfield. He never beat me,” Gorneau said.

Gorneau taught driver’s ed during the day at Wiscasset, coached a JV game after school, then officiated varsity basketball games at night.

“Two years after I got done coaching, Tim Flanagan took over and took my team to a state championship,” Gorneau said.

Gorneau retired from teaching in 2000, after 35 years, and dedicated himself to officiating full-time. 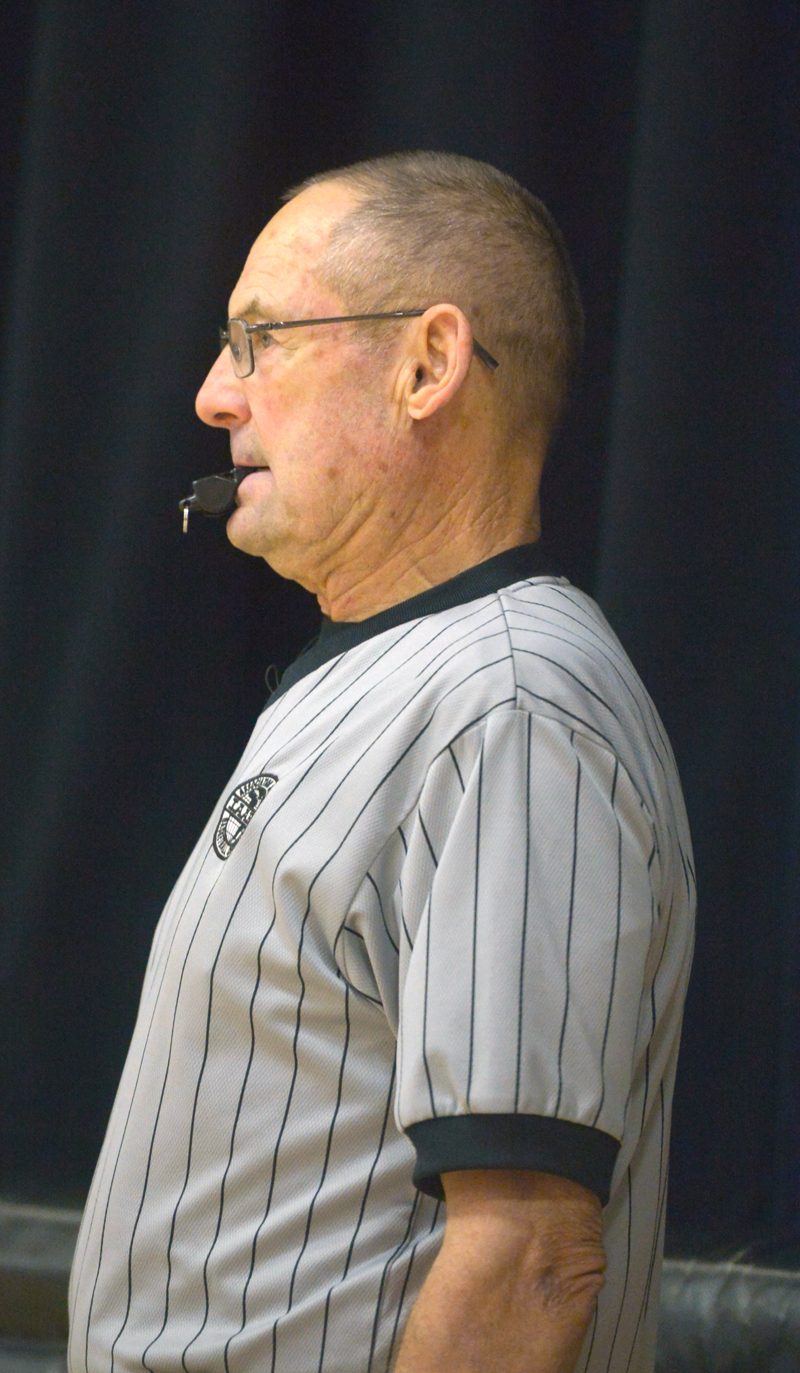 One of the highlights of his officiating career was a game at Gardiner against Lawrence. “Cindy Blodgett broke the state scoring record that night,” he said. “The place was packed and ESPN was there. I was on ESPN at 3 a.m.”

Gorneau didn’t know Gardiner was playing Lawrence until he walked onto the court. His refereeing partner gave Lawrence’s coach, Bruce Cooper, his second technical foul, which meant Cooper did not see Blodgett break the record. “We did let him come out and watch Blodgett give her mother the ball,” Gorneau said.

Another special event in his career was officiating Division I Duke University coach Joanne Palombo McCallie when she played junior high and high school sports in Brunswick.

He has developed a good relationship with “the old boys,” referees like Walt White, Wilder Hunt, and Tom Mellor. Gorneau treasures his time working with fellow officiating legends of the game.

He has officiated games on North Haven and Vinalhaven for 47 years. “I have been blown in, snowed in, had no power, and not been able to get off,” Gorneau said of the island communities. “It is a great place to go. The people are wonderful. They take good care of you. They put you up and feed you.”

On Vinalhaven, officials often stayed at Raymond Alley’s mother’s rental house. Alley was a legendary player for Vinalhaven. Blodgett broke his state record, of more than 2,000 points in a career. “I used to referee him. He is Walt White’s nephew,” Gorneau said.

Gorneau officiates year-round, which keeps him physically fit. For the past 30 years he has officiated men’s league soccer and basketball in Brunswick, Auburn, and Wiscasset.

“A lot of officials do not like to do rec games. I just love refereeing. It is my fix for the day. If I don’t have a game, I get ugly,” Gorneau said.

“Earl Purington gave a clinic once. He said he got put on this Earth for one reason, to umpire softball,” Gorneau said.

“Not everyone is born to be a referee,” Gorneau added.

Asked if he thought he was born to be a referee, Gorneau responded, “I do.”

While Gorneau shows no signs of slowing down, he said he does want to take more time to go camping, hunting, and fishing, which ranks second to the thing he likes to do best, referee.