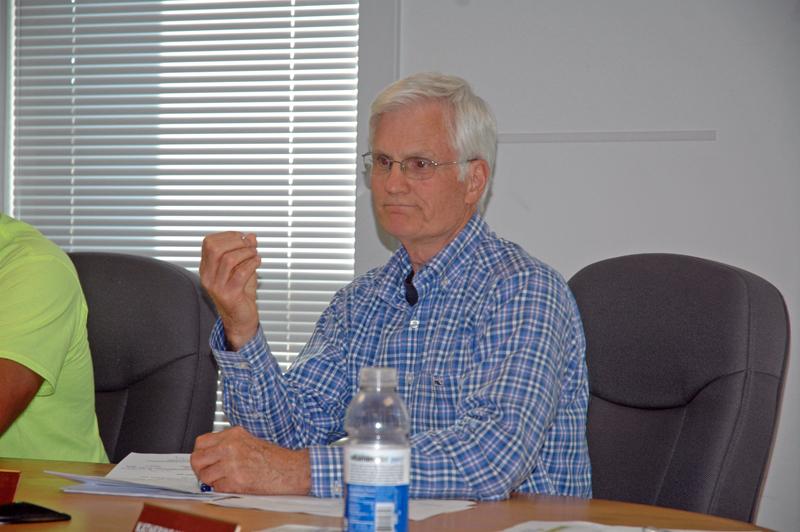 The town of Waldoboro has put out a request for proposals to install a solar array at the town’s landfill.

A site visit is scheduled for 11 a.m., Thursday, July 27, with interested parties asked to meet at the town office.

James LaBrecque, a technical adviser on energy to Gov. Paul LePage, was invited to appear before the Waldoboro Board of Selectmen by Selectman Abden Simmons. Simmons, R-Waldoboro, also represents Waldoboro, Friendship, part of Union, and Washington in the Maine House of Representatives.

LaBrecque said he was there to provide a different perspective on the solar issue and urge the town to proceed with a specific goal before embarking on a solar project.

“This is complicated stuff. They shouldn’t rush in making a decision. They need to have a more diversified selection to weigh their options,” LaBrecque said.

He encouraged the town to look at other paths forward if their goal is to reduce the town’s carbon footprint.

“There are other municipal options to look at if you want to cut down on oil and CO2. See what the options are. See what options can accomplish what your goals and choices are,” LaBrecque said.

LaBrecque said the LePage administration opposes subsidizing the cost of solar panels at the expense of ratepayers and taxpayers.

LaBrecque said L.D. 1504 – the solar bill recently vetoed by LePage – is particularly unfair to the state’s elderly and poor, and called the bill a new tax.

He said there are better ways to reduce the carbon footprint in Maine: by reducing heating and transportation costs, in addition to increasing the efficiency of current electrical use through options such as LED lightbulbs and improved insulation. 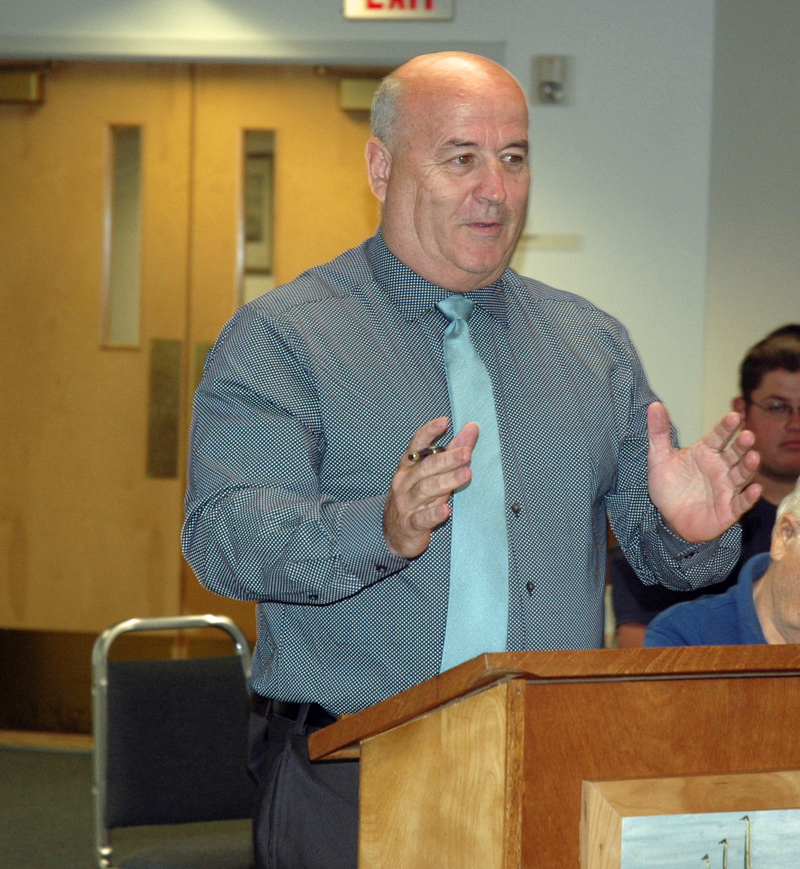 James LaBrecque, a technical adviser on energy to Gov. Paul LePage, addresses the Waldoboro Board of Selectmen. (Alexander Violo photo)

“Maine uses 100 times more oil for heat and transport than what we use for generating electricity. Energy efficiency saves more money than subsidized electricity. I think we ought to be looking at this issue a little closer,” LaBrecque said.

Selectman Robert Butler said the benefits of solar energy are in its ability to address the fundamental issue of energy production without the use of fossil fuels.

LaBrecque said solar energy is not cost-effective and is unreliable for a large portion of the year, and suggested the pursuit of alternative sources of sustainable energy, such as  hydropower from Quebec.

Butler said the issue isn’t a matter of whether solar, hydro, or wind are the best option, but of using the options together to increase energy sustainability and reduce the state’s reliance on outside energy sources.

“Solar and hydro are one of the ways out and you’re dead at the helm and you’re not dealing with the issues and you need to be,” Butler said.

LaBrecque said the market should dictate energy options and questioned why solar needs subsidies if it is an effective alternative.

“When you can make it in the marketplace, you don’t need these laws,” LaBrecque said.

Seth Hall, a member of the renewable energy subcommittee, said he is in favor of bringing solar to Waldoboro.

Hall described the addition of a solar array as a cost-saving move.

Hall said a  power-purchase agreement is an intriguing option for the town to pursue.

“The big win is, after the six-year initial lease period, the array will be available to buy at about 60 percent of the original cost,” Hall said.

As the conversation progressed to a public comment portion, featuring input from members of the town’s renewable energy subcommittee the discussion shifted toward L.D. 1504, “An Act Regarding Solar Power for Farms and Businesses,” a bill LePage vetoed earlier in July.

Supporters of the legislation will now have to attempt to override the governor’s veto in the Legislature.

The bill, which has received support from environmental groups and solar installation companies, would direct the Maine Public Utilities Commission to adopt new rules keeping the practice of net metering in place, but reducing incentives for solar over time.

The PUC voted to phase out net metering earlier in 2017.

The process of net metering entails a billing mechanism crediting solar energy producers for the electricity they add to the power grid at 100 percent of the full retail value of excess electricity fed back into the grid.

Ron Phillips, a member of the town’s renewable energy subcommittee, disagreed with LaBrecque’s assessment of the legislation as a complex bill.

“I don’t think 1504 is a complicated bill. I think it’s a simple bill that holds on to the prospect and possibility that solar is part of Maine’s energy future,” Phillips said.

Phillips said that though hydro is a sustainable option, it is one with high transportation costs.

“It’s great Maine has hydro. It’s a great thing to talk about, but transmission and distribution has costs,” Phillips said.

Hall reiterated his support for bringing solar to Waldoboro.

“It’s the long-term savings. I think this is why the board said go ahead and do it and why the Legislature supports it,” Hall said.