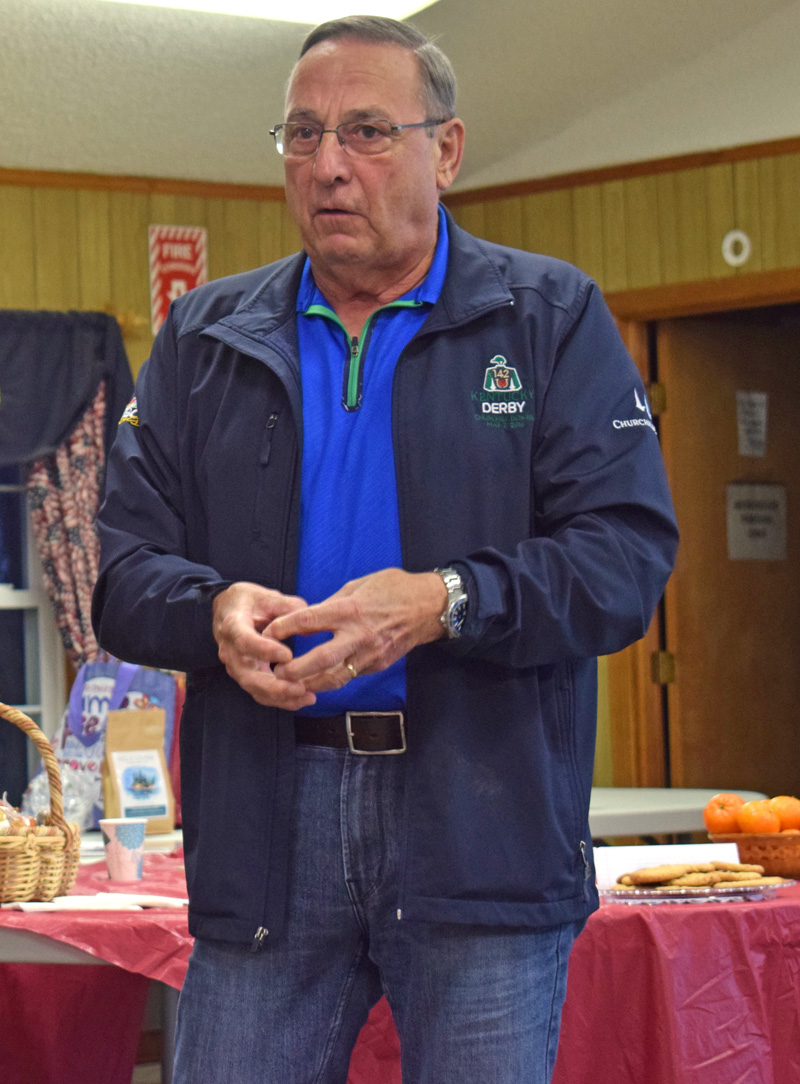 Former Gov. Paul LePage, who is mounting a campaign to challenge Gov. Janet Mills in 2022, speaks at the Wells-Hussey American Legion Post 42 in Damariscotta on Oct. 11, urging a no vote on state referendum question one, which seeks to block the New England Clean Energy Connect corridor project. (Evan Houk photo)

Former Gov. Paul LePage, who is mounting a campaign to run against Gov. Janet Mills next year, urged attendees to vote no on state referendum question 1, during a visit to the Wells-Hussey American Legion Post 42 in Damariscotta on Monday, Oct. 11.

The question reads: “Do you want to ban the construction of high-impact electric transmission lines in the Upper Kennebec Region and to require the Legislature to approve all other such projects anywhere in Maine, both retroactively to 2020, and to require the Legislature, retroactively to 2014, to approve by a two-thirds vote such projects using public land?”

LePage made a surprise visit to a discussion about the question led by his former technical energy adviser, James “Jim” LaBrecque.

LePage argued for more diversity in renewable energy sources and an end to state subsidies for solar power generation.

“Right now in the state of Maine, people with $400,000 homes with solar panels on their roofs are being subsidized by the people who live in trailer parks. That’s a fact of life,” LePage said.

LaBrecque currently works as a professional engineer specializing in energy control technology. He said no one is paying him to do his research and it is only based on his independent findings of fact.

The referendum seeks to block the New England Clean Energy Connect corridor on three fronts and will go to voters on Tuesday, Nov. 2.

“The intent of the referendum is to circumvent a fair and just process,” LaBrecque said.

The project includes “the construction of an electric transmission line from the Maine border with Quebec in Beattie Township to a new converter station in Lewiston. The corridor and infrastructure will be collocated within an existing transmission line corridor, except for the approximately 53 miles in Segment 1 that will be newly developed,” according to the Maine Department of Environmental Protection’s website.

LaBrecque discussed the inefficiency of solar panels and also argued against taxpayer subsidies for solar and wind power.

LaBrecque argued that solar panels are not efficient enough and there are simply not enough batteries out there to store the amount of solar energy that will be produced from the corridor project. He said that solar panels have a capacity factor of 15%, which means the panels can typically convert 15% of the sunlight captured into usable energy. 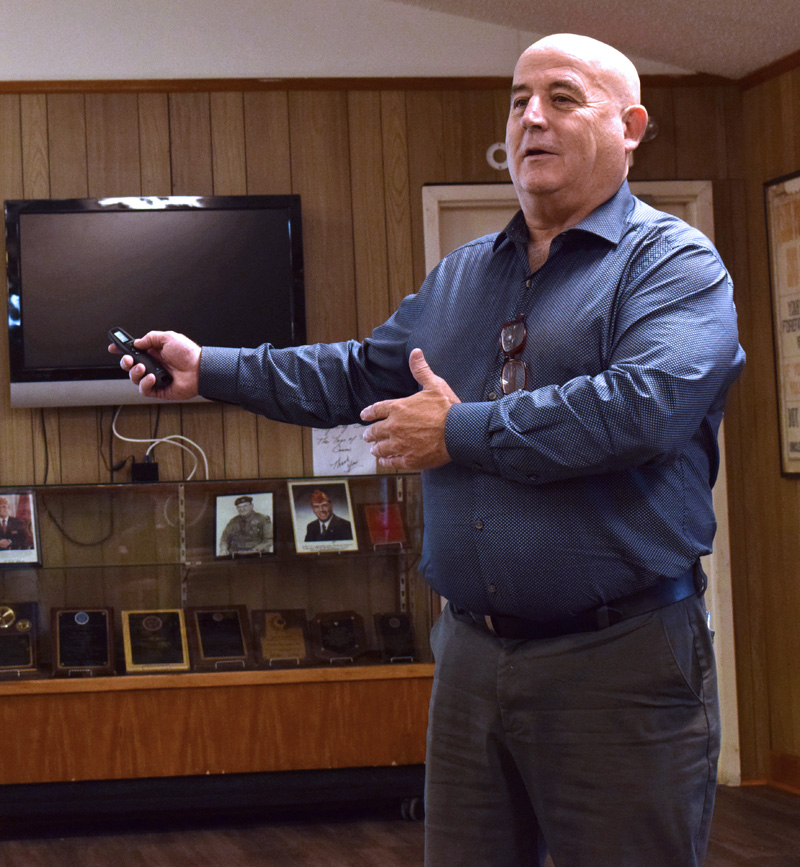 Jim LaBrecque, a professional engineer specializing in energy control technology, argued for a no vote on state referendum Question 1 and a more diverse approach to renewable energy in Maine during a presentation at the Wells-Hussey American Legion Post 42 in Damariscotta on Oct. 11. (Evan Houk photo)

“Solar is, on average, seven times more expensive,” LaBrecque said of solar energy’s cost relative to the power that would be supplied by the corridor project.

An economic analysis released by supporters of the corridor indicates that fossil fuel and nuclear generators could lose $1.8 billion over 15 years if the corridor comes online.

When asked by an audience member if he believes in climate change, LePage said yes and said the state should be investing in hydropower and new nuclear power technology, in addition to other energy sources.

He suggested we stop buying products from China if we want to save the planet, because those products are manufactured using largely fossil fuel energy.

State Rep. Jeff Hanley, R-Pittston, kicked off the meeting by saying it was not a political presentation but only “factual.” Opponents of the corridor were invited to speak at the presentation, Hanley said, but no one accepted the invitation.

“This is a very good thing for Maine,” Hanley said. “If you’re interested in getting clean energy into the grid, this is the right way of doing it.”

Lincoln County Democrats are hosting a Lincoln County Community Conversations event online, “Views from both ends of the CMP Corridor,” from 6:30 to 7:30 p.m. on Thursday, Oct. 14. Information can be found at lincolncountydemocrats.com.