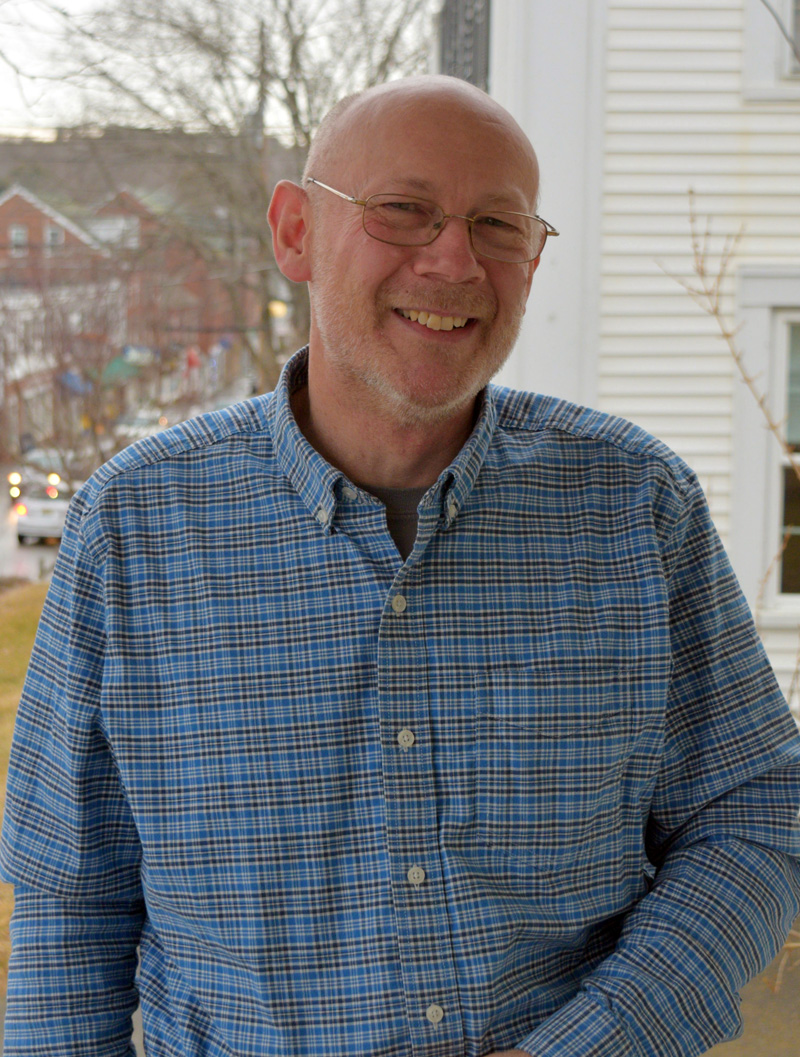 David Levesque, of Newcastle, stands on the porch of his office at 242 Main St. He is one of three candidates running for Maine Senate District 13 in 2022. (Nate Poole photo)

Newcastle attorney David Levesque is one of three candidates running for Senate District 13.

District 13 covers all of Lincoln County, except Dresden, as well as the neighboring towns of Washington and Windsor. Levesque will be one of three registered candidates running for the seat.

Levesque will compete in a primary race against Round Pond’s Cameron Reny to become the Democratic Party’s candidate before one of them goes up against Waldoboro’s Abden Simmons in the general election.

Levesque’s decision to run was partly driven by opportunity. The attorney ran in a three-way race for House District 46 (then House District 90) in 2020 that Newcastle social worker Lydia Crafts ultimately won.

When he heard that incumbent Sen. Chloe Maxmin would not be running for District 13, he saw it as another chance at representing his region in the legislature.

“I think at the Senate I would have more of a voice… and I can build stronger relationships with the other members and hopefully get things done,” Levesque said on Jan. 19.

Levesque grew up in Hancock County in a family immersed in commercial fishing and boat building industries. He has lived in Newcastle for 22 years with his wife, Susan, and three sons, Luke, Austin, and Joseph.

Levesque is running on much the same platform as when he ran for the House: Healthcare, education, and combating climate change. However, this time around, he’s also focused on addressing addiction and overdoses in Maine.

Since his last election run, Levesque lost a cousin to a drug overdose, and suddenly the state’s drug problem became a very immediate and very real concern for him.

“In 2020, (there were) 504 overdose deaths in Maine and then in 2021 the numbers look like they’re going to come 600. So if you look at what we’ve been dealing with with the pandemic and compare it to that, that’s a serious issue out there,” he said.

Levesque said that he is in favor of drug sentencing reform which would not send those struggling with addiction to jail for possession of certain amounts of drugs for personal use.

“We’re punishing them for the crimes they did but not the underlying problem,” Levesque said.

Drug reform is part and parcel to overarching healthcare reform, and he hopes to eventually help make universal, affordable healthcare available to all Mainers. Levesque said that he has seen exorbitant healthcare costs drive countless individuals into staggering debt in his time doing bankruptcy work.

“All these debtors show up and they have to sit in front of the bankruptcy trustee,” he said. “I looked around the room and they didn’t look like people just trying to get out of debts … I would say eight times out of ten it’s medical debt,” he said.

“It’s been transformative in my life, and I think in higher education we need to make sure it’s there for everybody and accessible to everybody, not just the (state) university system but the community college system as well,” he said.

Levesque said that climate change is another issue that he will prioritize to the best of his ability in the Legislature. Describing the urgency of rising sea levels, he pointed to the $4.2 million that Damariscotta stands to spend on preventing flooding in its waterfront parking lot.

It’s a quality of life issue … it’s economic issues,” he said. “We have to think long term and understand the science of whatever we’re doing.”

He is also a member of the Newcastle Select Board and the Damariscotta-Newcastle Broadband Committee.

In what little free time he has, Levesque enjoys traveling and lately he has taken up wood carving.

“I have to weave a lot into my life,” he said. “I’ve been able to make it work in the 24 years of practice I’ve had. It’s just been a natural part of what I’ve been doing.”

For more information about Levesque and his campaign, go to David Levesque for Maine Senate District 13 on Facebook.