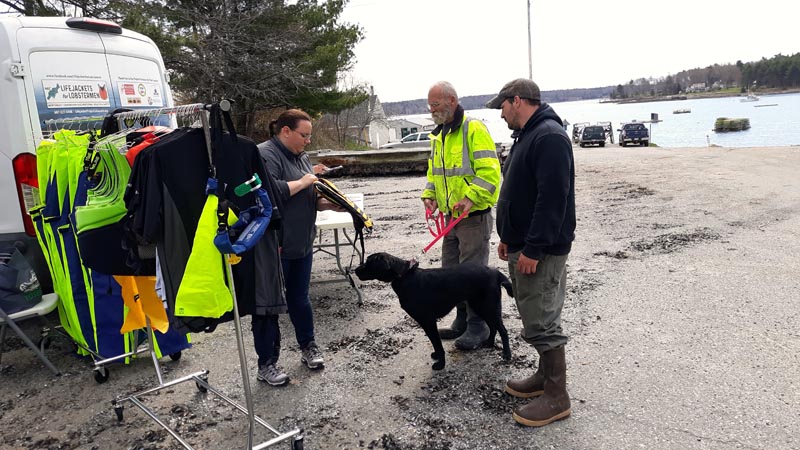 From left: Erin Lally, a representative of Lifejackets for Lobstermen, shows a personal flotation device to lobstermen Gary Clifford (with Maggie) and Brad Burns at Round Pond Landing on May 7. (Candy Congdon photo)

Lifejackets for Lobstermen vans recently visited Lincoln County docks as part of an effort to reduce deaths in the fishery across Maine and Massachusetts.

The program aims to make life jacket use easy and affordable for lobstermen.

The lobster fishery had “the highest number of occupational fatalities in East Coast fisheries from 2010-2014,” according to a press release from the Northeast Center for Occupational Health and Safety.

Half of the deaths were from falls overboard and another 30% from “vessel disasters,” according to the press release. None of the victims were wearing life jackets.

The Lifejackets for Lobstermen vans were at Shaw’s Wharf in New Harbor on May 6 and Round Pond Landing on May 7.

Other recent stops include the Wiscasset waterfront on April 29, Robinson’s Wharf in Southport on May 1, the Fish Pier in Boothbay Harbor on May 2, and Eugley Landing in South Bristol on May 3.

The vans offer discounts on personal flotation devices at each presentation. 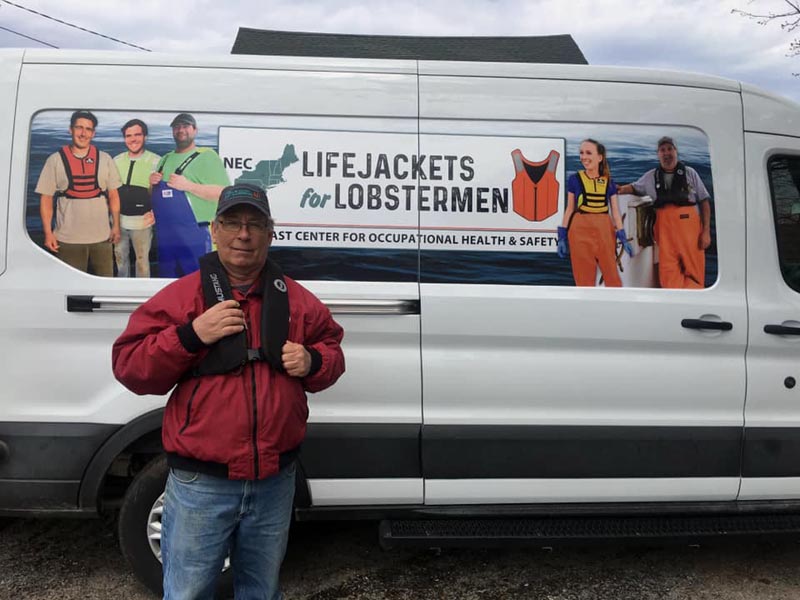 Lobsterman and Round Pond Harbor Master Robert Ball models his new personal flotation device from Lifejackets for Lobstermen during the campaign’s visit to Round Pond on May 7. (Photo courtesy Amanda Roome)

Early visitors to the presentation in Round Pond included lobstermen Gary Clifford and Brad Burns. Later in the day, lobsterman and Round Pond Harbor Master Robert Ball stopped by and bought a life jacket.

At each dock, Lifejackets for Lobstermen sets up display racks with an array of flotation devices available to look at and try on.

A variety of handouts are available, including a pamphlet with information on 11 of the devices. Each has undergone trials with almost 200 participating lobstermen.

Research by the Northeast Center for Occupational Health and Safety: Agriculture, Forestry, and Fishing about why many lobstermen do not wear life jackets pointed to barriers that the center and its partners are working to address through the Lifejackets for Lobstermen campaign.

“We’ve been working with lobstermen over the past few years to identify user-friendly, commercially available lifejackets and, fortunately, we have identified many that lobstermen find appealing,” Project Coordinator Rebecca Weil said in the press release.

The campaign aims “to make lifejacket use the norm in the lobster fishing community,” according to the release.

Amanda Roome, research fieldwork coordinator for the Northeast Center for Occupational Health and Safety, said there was a good turnout in Round Pond for the time of year and the vans sold a few flotation devices.

They plan to return to the area later this year, probably in early August.