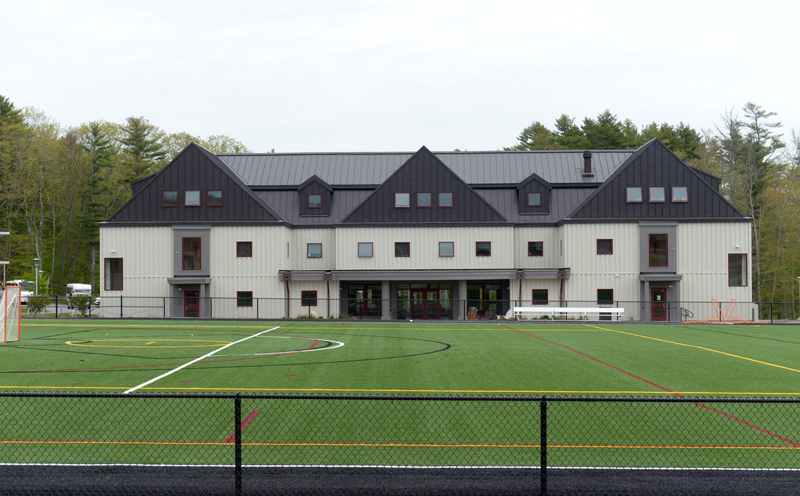 Lincoln Academy expects a dip in boarding enrollment next year, in line with a trend of fewer Chinese students going to high school in America.

The school has capacity for 90 students in its residence halls. It has 84 students this year and plans to have 75 next year, according to interim Head of School Nancy Starmer.

Despite this dip, the program will continue to be a net financial benefit to the school.

The school subtracted all the expenses for the program – payments on the school’s bond and boarding-specific programs like admissions, English as a second language, and residential life – from the revenue it brings in.

The program’s net income totals about $1.03 million per year at full capacity, according to the analysis. At 75 students, it will still net the school $500,000, Starmer said.

“It’s a benefit, financially, to Lincoln Academy,” Starmer said. “It’s also a huge benefit to everybody – to the international students who come, who get this experience, and to the local kids who come to Lincoln Academy and have the opportunity to meet kids from all over the world.”

The drop in revenue will affect the school, however. Lincoln will not fill two administrative positions due in part to the decrease in revenue, according to Starmer and Head of School David Sturdevant.

One position is vacant and the other will be soon. The positions – associate director of admissions and director of development and alumni relations – were new as of the 2017-2018 school year.

Both employees had taken new jobs prior to the school’s decision to eliminate the positions. One left during the school year and the other will leave in May. Their duties will go to other administrators.

The administration also plans to combine two other administrative positions into one, although it has yet to finalize those plans. Both employees would remain at the school in some capacity.

The school will not cut any faculty positions, although it will make some adjustments to a math position.

To replace a full-time math teacher who will leave at the end of the school year, the school will hire a former employee to teach part time and another teacher in the department will add a class.

The school will also eliminate free lunches for employees and will not run classes with low enrollments “unless they serve a population that can’t be served in another way,” according to a summary of Starmer’s remarks to the faculty in a meeting May 9.

Starmer said the most important point is that “Nobody had to leave Lincoln Academy.”

“I think the salaries and benefits are almost 75 percent of our budget, so in a different kind of business, you would just say, ‘Cut some positions. Fire a handful of people. Do a reduction in force,’” Starmer said.

Her goal was to avoid this scenario and still meet the school’s needs – both academic and financial. “Schools are communities and teachers invest a lot of their lives in this work,” she said.

“You really can’t cut teachers very much at all, because the programs we’re providing are all essential and they’re good programs for a wide variety of students,” Sturdevant said.

In addition to the dip in boarding enrollment, the administration attributes the changes to normal adjustments as enrollment of all students fluctuates throughout the year.

The school moves assignments around after students register in the spring. Students move into or out of the area during the summer, and the school often has to adjust again in August.

“I think you’ll find that this kind of movement happens in most schools quite frequently, where you’re mixing and matching and trying to fill your needs, to meet the needs of the kids, with various faculty members,” Sturdevant said.

The decline in boarding enrollment responsible for the administrative  changes is affecting private boarding schools across Maine and New England due to similar reductions in numbers of Chinese students.

Lincoln Academy’s boarding program has students from 20 countries. The program is diverse by design: international parents want to send their children to a school with students from other countries, and Sturdevant sees it as better for the school and the community.

However, the most populous country in the world still accounts for many boarding students at LA and other private boarding schools in America.

“The largest single group of international students that Lincoln Academy has is from China, and that population is dwindling,” Starmer said.

Private schools in the U.S. face competition from a new wave of “American-style” schools in China.

In the U.S., rural public schools are beginning to compete for Chinese students in order to offset declining enrollment.

There are other factors too: a decline in the number of visas available for international students, ongoing trade disputes between China and the U.S., “a less welcoming climate for immigrants to the U.S.,” and even the timing of the Parkland school shooting during admission season, Starmer said.

New England town academies with boarding programs much older than Lincoln Academy’s, including Maine Central Institute in Pittsfield, are confronting the same decline.

MCI has cut sports programs – freshman basketball and fall and winter cheerleading – and is “reducing” an unspecified number of administrative, faculty, and staff positions, according to an April 6 article in the Bangor Daily News.

To read a summary of Starmer’s message to the faculty or view Telfer’s analysis of boarding revenue, see the documents below.