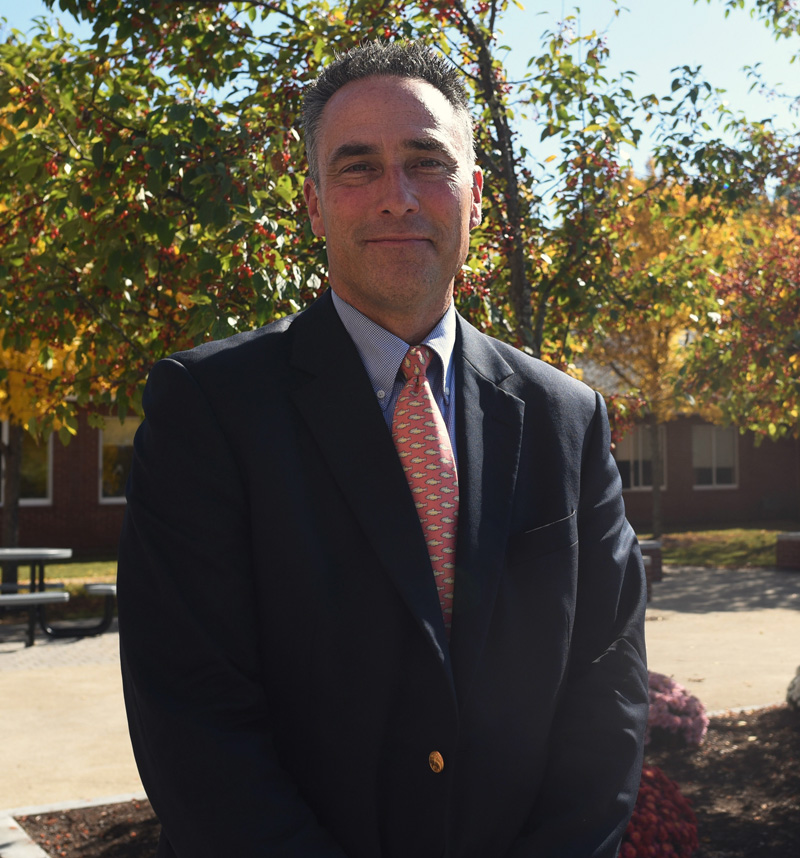 Lincoln Academy has named its next head of school: Jeffrey Burroughs, assistant headmaster for academics at St. Johnsbury Academy in Vermont.

“With his deep appreciation for the town academy model, a leadership style that can be described as collaborative and approachable, and his emphasis on the importance of building relationships within the school and with the communities we serve, Jeff promises to both appreciate LA’s proud past and lead the school in moving forward together. We are honored and excited that he will be joining us,” Lincoln Academy Board of Trustees Chair Judi Hilton said in a press release Thursday, Nov. 1.

Along with his administrative role, Burroughs teaches math and coaches the girls soccer team at St. Johnsbury. The school has 720 day students and 250 boarding students, which makes it almost double the size of Lincoln Academy.

Burroughs visited Lincoln Academy as a finalist Oct. 9 and 10.

“We have an opportunity in high school, when you’re forming a lot about a student’s understanding of themselves, to really help them see, ‘I could be this, I could do this, I have a potential that is worth investing time in,’” Burroughs said in an interview during his visit. “Particularly in independent schools, you can talk about things of character, you can challenge them on ideas, and that’s the value to me.”

“You have an opportunity to help them understand what it’s like to be part of a global community, even if they aren’t going to leave this community,” he said.

Burroughs has held his current position at St. Johnsbury Academy since 2009. Before St. Johnsbury, he worked for seven years as a program manager at IBM.

In addition to his knowledge of town academies, Burroughs brings familiarity with the Midcoast. He worked at Hyde School in Bath for 12 years earlier in his career, in positions such as assistant headmaster and director of admission. He lived in Woolwich at the time.

“I am thrilled and deeply honored to be selected to lead Lincoln Academy as its next head of school,” Burroughs said in a statement. “I was so impressed with the students, teachers, staff, and community members that I met in the search process and am excited to help lead LA into the next chapter of its history. I believe deeply in the power and purpose of the town academy educational model, and I look forward to bringing my professional experience to serve this great school and community.”

He plans to relocate to Newcastle in June 2019 with his wife, Melissa Burroughs, who works in the guidance department at St. Johnsbury.

When not working, Burroughs said he enjoys playing soccer, fly fishing, skiing, and playing with his dog.

Lincoln Academy formed a search committee in the spring, before the departure of Head of School David Sturdevant at the end of the school year. The committee consisted of five members of the board of trustees, two faculty members, and one community member.

Educational Directions, a school executive search firm, worked with the search committee during the application process. The school accepted applications from May through August.

About 60 people inquired about the position and 19 applied, according to Hilton. The committee, which met every other week, narrowed the field to seven, then to the three finalists.

A community advisory committee also met with each finalist. Community members were able to give their feedback on the candidates through a survey after each visit.

“The process was challenging, because we had many qualified candidates who could have done the job well, but Jeff is the right person at the right time for Lincoln Academy,” Hilton said in the press release. “By hiring Jeff more than six months before he takes the reins, we hope to ensure the smoothest possible leadership transition.”

“He will have a chance to work with Nancy, the board, and members of the faculty during visits to campus this winter and spring. All of us who got to know Jeff through the search process have every confidence in his ability to lead Lincoln Academy in the coming years,” she said.