Lincoln Academy gave the public a look at the school’s budget and discussed its recently completed strategic plan during the school’s first town hall-style meeting in its Parker B. Poe Theater on Wednesday, Sept. 21.

For many years, the Lincoln Academy Board of Trustees held its annual meeting in July, but the meetings had been sparsely attended, according to Head of School David Sturdevant.

Lincoln Academy has $8,705,618 in expenses, according to Helen Telfer, the academy’s chief financial officer. Day and boarding schools the size of Lincoln Academy spend 65-72 percent of the budget on salaries and benefits, Telfer said. Lincoln Academy currently spends 70 percent.

“We’re right about in the middle,” Telfer said. 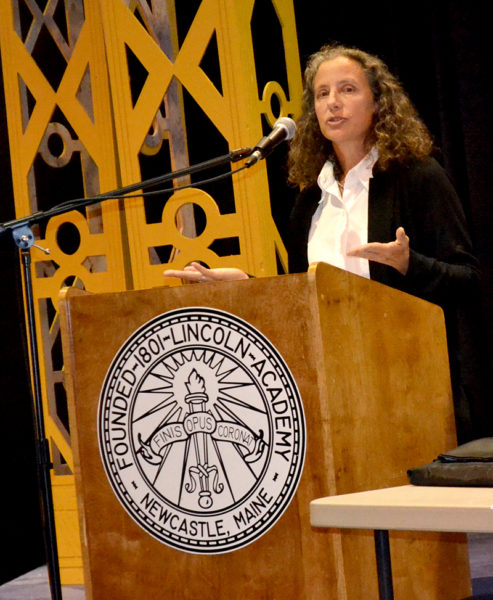 Lincoln Academy Associate Head for External Affairs Matt Goetting gave an overview of the strategic plan, which had been in the works since April 2015.

The plan has three areas of focus: investing in programs and people, building a long-term vision for the campus, and cultivating the sustainability of the school’s community. Each area of focus has a number of core objectives.

The full strategic plan is available at lincolnacademy.org.

Sturdevant also discussed the school’s decision to change from a one-to-one computing program, in which the academy provided a laptop to each student, most recently a Google Chromebook.

For the past six years, the academy has participated in the one-to-one program. The school founded the program with support from donors and self-funded the program for the last three years.

The academy’s three-year lease agreement ended in June 2016. The decision was made not to renew the program and to instead require students to use their personal laptops for schoolwork.

In addition, the academy purchased the 600 Chromebooks at the end of the lease, Sturdevant said. The Chromebooks that were still viable were refurbished by a team of students over the summer. Almost 40 families purchased used laptops on a sliding scale, and the rest of the computers are available in classrooms at the school.

During the last three weeks of the school year, students will be able to choose from a variety of experimental or interdisciplinary classes. Prior to coming to Lincoln Academy, Sturdevant introduced a similar program when he was principal at Fryeburg Academy.

Parents had questions regarding what classes would be offered during the Eagle Term and how teachers would adapt their curriculum to account for the three-week decrease in teaching time.

Sturdevant said details of the program are still being worked out, and it has not been determined which classes will be offered during the Eagle Term.

“There’s some back and forth and finessing left to do,” Sturdevant said.

The academy plans to make the town hall-style meeting an annual event.