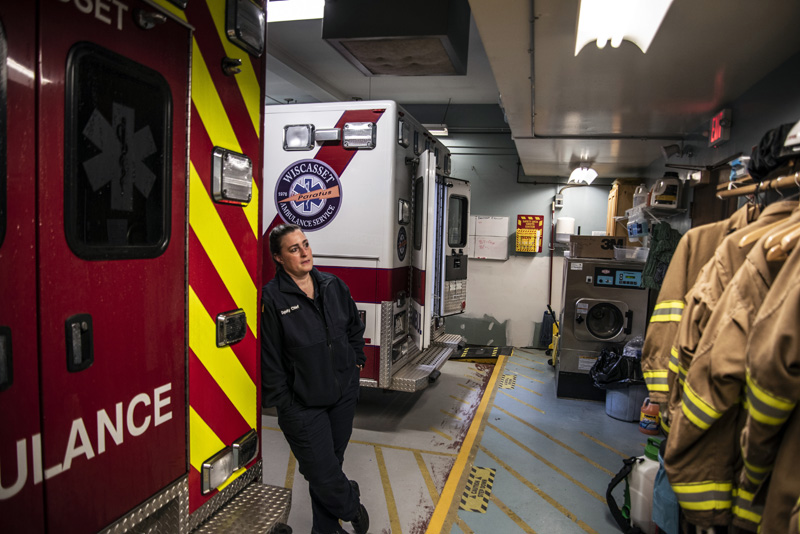 Erin Bean leans against an ambulance in Wiscasset on April 13, 2020. All four Lincoln County ambulance services are facing critical staffing shortages that threaten their ability to meet the level of care needed by residents. (Bisi Cameron Yee photo, LCN file)

Chief officers of Lincoln County’s four ambulance services met for the first time on Monday, Sept. 27, to formulate a plan for a regional approach to the staffing crisis that threatens the lives of residents in their communities.

With little help from state or federal agencies, local EMS leaders realized that solutions may have to start at the local level.

Nick Bryant, service chief of Central Lincoln County Ambulance Service, said, “Lincoln County has an aging demographic and as the oldest county in the oldest state, it can’t afford to not have an EMS response.”

The Central Lincoln County, Boothbay Region, and Wiscasset ambulance services along with Waldoboro EMS, provide emergency response and transport for residents across Lincoln County. But they face increasing difficulty sourcing emergency medical technicians and paramedics to staff the ambulances.

As a result, residents may face a choice between opening their pockets to fund the wage increases necessary to attract and retain qualified personnel or the possibility of losing access to EMS services.

“Imagine if someone calls 911 and no one comes,” Bryant said.

While it may seem counterintuitive, EMS is not recognized as an essential service by the federal government, or by the state of Maine. EMS departments and ambulance services receive no federal or state funding and their operating expenses fall on their local communities.

With revenues dropping as services are not able to accommodate hospital and nursing home transfers that make up 30% to 60% of their budgets, town officials must figure out where funding will come from, and how much more they will ask of taxpayers.

According to Bryant, town requests from CLC will go up 100% or more next year to fund necessary pay increases. “You need to pay them real wages,” he said.

A significant chunk of funding for the four services comes from the towns they cover based on calculations that compare percentages of calls and population numbers to determine contributions and per call rates.

Waldoboro gets additional income from contracts with towns that are underserved like Jefferson and Warren.

While Lincoln County ambulance services charge in the range of $700 to $1,300 a call depending on time, mileage, and resources required, many of those calls are not reimbursed or are reimbursed at lower negotiated rates.

Ambulance services seldom receive reimbursement for calls that are not deemed medically necessary. But mandated protocols require them to respond.

In doing so, they may sacrifice a compensated call while responding to issues that don’t require their skills. Or worse, they may miss a critical call and someone may lose their life.

Transfers were a significant and reliable source of department funding in the past, but ambulance company officers are hesitant to commit a crew to a transfer at the risk of leaving their community without adequate coverage.

Scott Lash, Boothbay Region Ambulance Service director of operations, said he received calls from hospitals as far away as New Hampshire looking for a department with the resources to assist with a transfer.

“Hospitals go down the list,” he said. He recalled a recent request from a distant, desperate hospital to transfer a patient to hospice. He was unable to accommodate the request, but still thinks about that patient at the end of their life waiting for an ambulance to drive them a mile down the road to a place where they could die in peace.

Equitable compensation for a difficult job is one of the roots of the crisis. Starting pay locally ranges from $15 for a basic EMT to $25 for a paramedic, and only full-time staff members are  eligible for benefits.

Right now there are limited full-time positions available, although Waldoboro is beginning discussions about increasing the number of full-time staff.

While EMS is often made up of volunteers, “This is a career now,” Bryant said. “That’s going to raise the cost.”

“We need enticements,” said Richard Lash, director of Waldoboro EMS. “Like 20- to 25-year retirement, benefits, vacation, decent pay. We need a carrot on the other end.”

A dearth of talent is another critical factor that is both systemic and a reaction to the pandemic. There are not enough qualified people to fill the ranks and the four services are all recruiting from the same pool.

Much of the EMS workforce in Lincoln County is made up of EMTs or paramedics who work full-time jobs, either with another service or more often in another industry. They pick up per diem shifts as needed. Many of them are on the roster at multiple services.

Scott Lash blames the “great resignation” for some of the shortage. He said that as people reevaluate their lives and commitments, they decide to take a step back. This puts pressure on those left in the field, and eventually causes the next wave of resignations.

He also blames the “great reckoning.” Wages have been low for too long and it’s catching up.

“People are working from dedication and loyalty, but at the end of the day, they need to make a living,” he said.

All the local EMS and ambulance services have faced or are facing some loss of staff due to the vaccine mandate.

According to Scott Lash, most EMS workers are vaccinated and any losses will have to be absorbed, but “the impact we’ll feel (from the vaccine mandate) is the shrinking of the applicant pool.”

While Bean said she lost three staff members to the vaccine mandate, 10 others quit because they could no longer work multiple places.

“People have been dropping out since January,” she said.

“People are tired,” said Richard Lash. “I’m tired. I’m getting ready to retire next June and I just came off cancer treatments. I’m no spring chicken anymore. But the shifts have to be covered.”

In a phone interview on Sept.28, Richard Lash said he worked 120 hours two weeks ago and 107 last week.

All four EMS leaders are continually recruiting new members, but options are limited without poaching staff from each other.

Traditional advertising in trade journals is not drawing responses as other municipalities in other states offer better pay or signing bonuses.

Bean teaches EMT classes and is able to occasionally recruit worker from her students, but Scott Lash said, “the net has to be cast a lot wider. When you take someone away from another service, it puts that community in peril.”

Richard Lash said he is constantly recruiting, working the phones, reaching out to contacts, and trying to figure out how to reach the next generation of EMTs.

“If we can get these young people enthused about it and if they could see a career path… they would be our future,” he said.

Julie Keizer, town manager for Waldoboro, has been on the forefront of the issue since Gov. Mills’ vaccine mandate was announced. She wants to know if there is a Plan B as she faces ongoing staffing shortages in her emergency response departments. Those shortages are about to be exacerbated when the mandate goes into effect Oct. 29.

Keizer is looking for ways to get ahead of the crisis, searching for proactive solutions, and rattling cages in Augusta.

She wants to know who will answer calls when she has been forced to fire staff for not adhering to the mandate. She is frustrated that no one at the state level is taking ownership of the emergency services crisis and the imminent fallout that may be precipitated by the vaccine mandate.

In a Sept. 28 email, Lindsay Crete, press secretary for Gov. Mills said,  “The Governor believes that every person in Maine who is placed in the care of (health care workers) has the right to expect – as do their families – that they will receive safe care, which includes receiving care from someone who is fully vaccinated.”

Crete said that as of August 2021 Maine experienced “at least 10 COVID-19 outbreaks associated with EMS which have forced first responders to isolate or quarantine and have driven staff shortages.”

According to Crete, the International Association of Fire Chiefs endorsed a vaccination requirement, stating that “repeated studies have shown that fire and EMS personnel can be up to 15 times more likely than the public to contract COVID-19 and are one of the most vulnerable classes of healthcare providers in terms of workplace exposures to COVID-19.”

Crete said that Gov. Mills proposed, and the Maine Legislature passed, the Maine Jobs & Recovery Plan in part to address long standing workforce shortages in Maine, including in the EMS field.

The legislation, which was signed into law on July 19, 2021, “provides tens of millions of dollars in workforce development opportunities.”

Crete’s email ends with an answer of sorts to Keizer’s request for a plan B: “It is our hope that contingency plans are unnecessary because EMS workers will receive their vaccinations to protect the health of those they care for.”

In other words, there is no Plan B.

The search for solutions is ongoing. All four Lincoln County ambulance services are invested in making sure their communities are taken care of.

“We’ll do the best we can to make the best reactionary decision we can,” Scott Lash said. But there is no clear, immediate action they can take to solve the crisis.