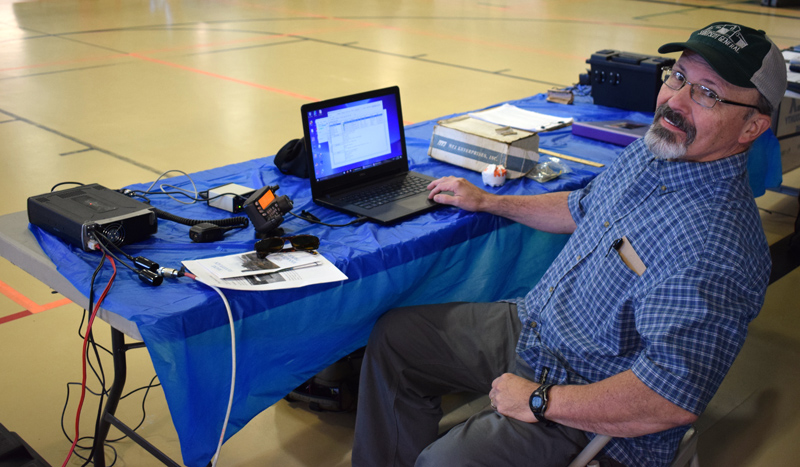 Imagine if the electrical grid went down for weeks or months at a time. What would you do? How would you eat, get clean water, or stay warm? Where would help come from if the rest of the state or the country was also without power and struggling to survive?

Everyone should ask themselves the above questions, according to Michael Mabee, author of “The Civil Defense Book: Emergency Preparedness for a Rural or Suburban Community.”

Mabee said the possibility of a cyberattack, electromagnetic pulse attack, or solar flare shutting down the country’s electrical grid is very real and everyone needs to be prepared for this or any other natural or man-made disaster that may occur. 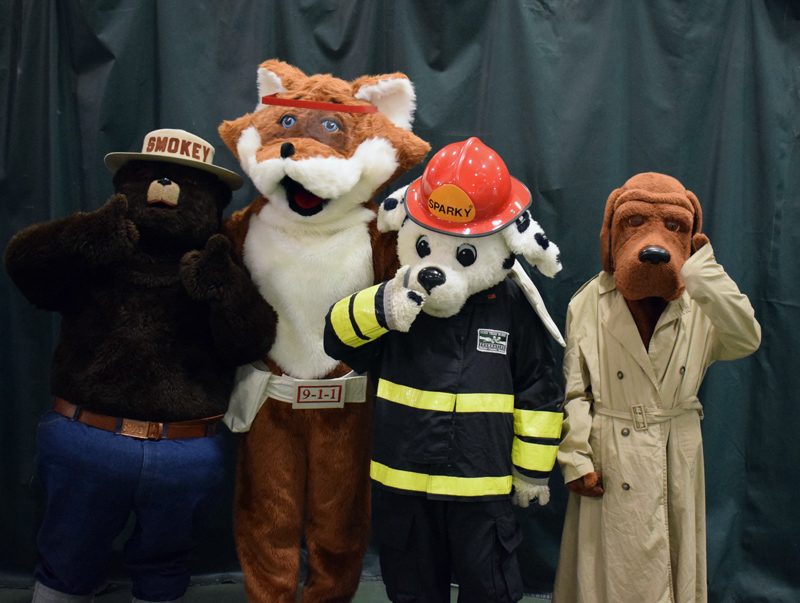 Mabee gave two presentations during the day where he discussed his book and its recommendations for how to go about preparing for what he called the “apocalypse.”

Casey Stevens, director of Lincoln County EMA and organizer of the event, said there were approximately 130 people at the first year for the fair, not including vendors, kids, or volunteers.

Stevens estimated that about 60 children attended the event. There was certainly plenty for the kids to do.

Outside, there were fire trucks and ambulances for the kids to explore, four famous safety mascots in full fur costume for the kids to get a picture with, and various coloring and comic books being handed out.

ServPro, a cleanup and restoration service that often responds to emergency scenes, had a mini cornhole board set up for kids (and adults) to try their hand. Players could win a green stress football if they sunk one beanbag out of three.

The Salty Boyz food truck, based in New Harbor, was also on hand. 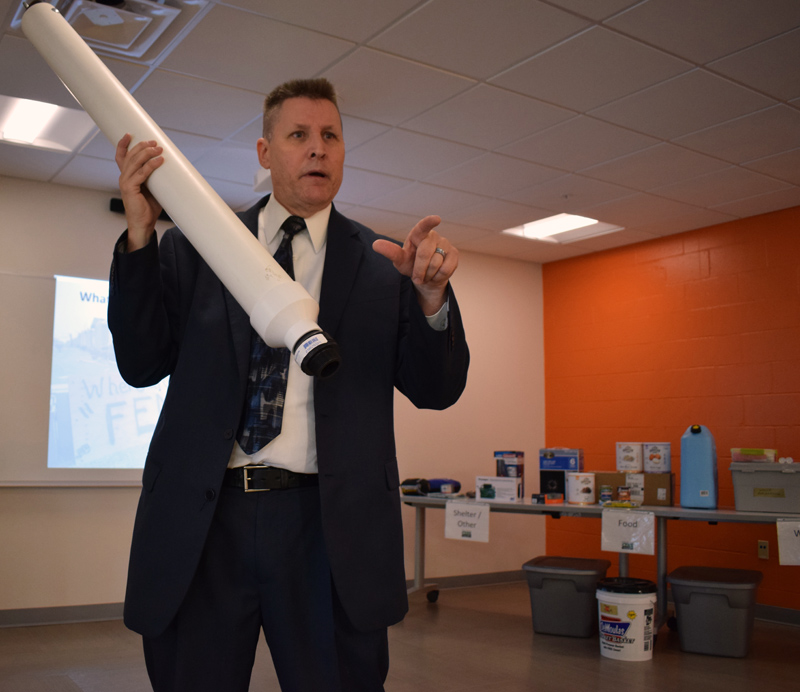 Michael Mabee, author of “The Civil Defense Book,” demonstrates the use of a “baler bucket,” which can extract water from a well in the event of a power outage, at the Lincoln County Emergency Preparedness Fair. (Evan Houk photo)

Stevens said he and approximately 20 volunteers, mostly emergency personnel, had been planning the fair for about four to six months. He got the idea from a similar event he attended in Waldo County last year.

Stevens thanked several businesses and organizations for advertising the fair on their digital signs in the weeks leading up to the event.

“We really hope people take getting prepared seriously. We are trying to create a culture of preparedness. We want people thinking about being prepared,” Stevens said.

Stevens recommended that all families have a contingency plan for being without power for at least 30 days. He said having a plan in place for this eventuality would ensure preparedness for virtually any other kind of major disaster. 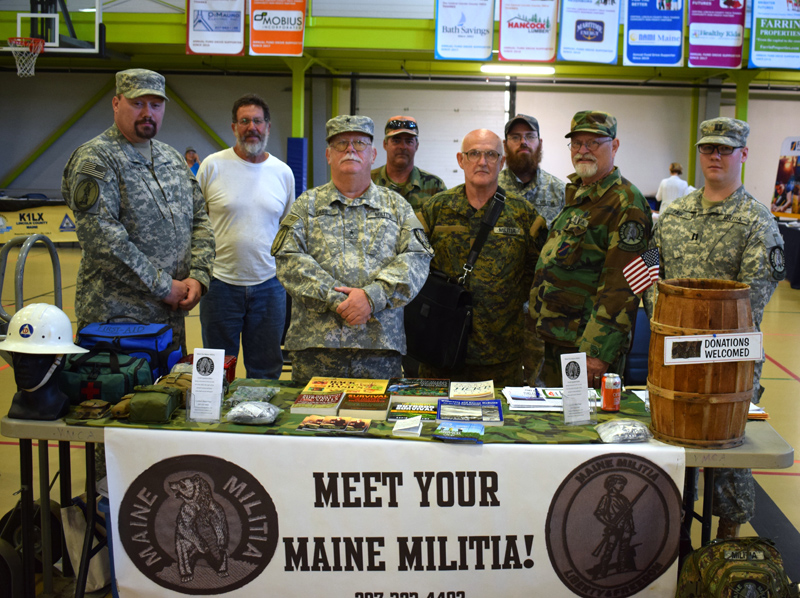 Maine Militia members with state coordinator Mack Page (third from left) attend the inaugural Lincoln County Emergency Preparedness Fair on Saturday, Sept. 21. The militia’s pamphlet states that one of its goals is to be ready to respond in case of a natural disaster. (Evan Houk photo)

He said a number of threats could affect Lincoln County, such as a cyberattack, an ice storm, a violent situation, or a long-term power outage.

Mabee, in his presentation, spoke at length about the vulnerability of the national electric grid.

He spoke about different blackouts throughout history, like the Northeast blackout of 2003 that affected 45 million people in eight U.S. states and parts of Canada.

He said the blackout was caused by overloaded transmission lines drooping into untrimmed tree foliage in Akron, Ohio. FirstEnergy, the power company in Akron, was not made aware of the issue because of a software bug in its alarm system.

A mini-documentary called “Black Sky” was playing every half-hour in another room in the Y, warning viewers of how vulnerable Americans are to disasters.

The American Red Cross gave three presentations on emergency preparedness throughout the day.

Maine Militia members said they have all the necessary emergency supplies being discussed at the fair on hand in case of a disaster. Response to a natural disaster is one of the purposes of the group stated in its pamphlet.

CodeRED is a new emergency alert system available in Lincoln County. Any resident can sign up from their mobile phone.

Stevens said CodeRED is already functioning in a number of other Maine counties, like Cumberland, Sagadahoc, and Somerset. CodeRED will send out important and official alerts, whether local or national. He said the system will only send out alerts that “really affect people.”

Stevens said another key feature of the system is its use of geolocation to send relevant alerts, depending on where the user is at the time, even if they are in another part of the country where CodeRED is also used.

He said emergency management directors can send alerts to specific areas using the system, to limit the number of irrelevant alerts. 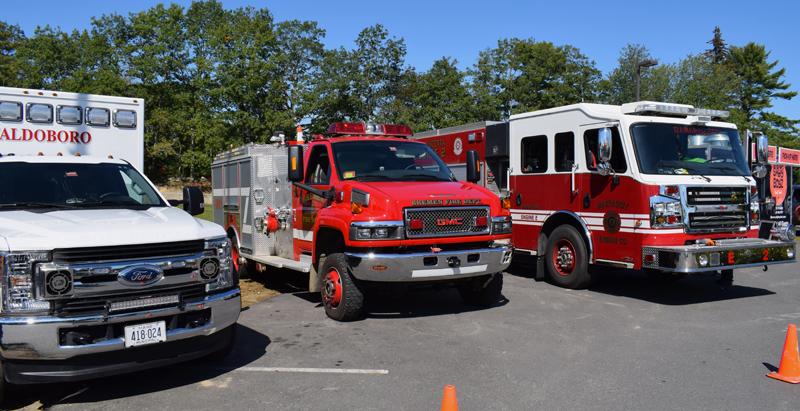 Lincoln County Amateur Radio demonstrated a method of sending email through an amateur radio without the aid of internet access.

Karl Richards, of Whitefield, was demonstrating the process inside the gym. He had a computer hooked up to a conversion device, which translated the email into a radio message. That message was transmitted, using power from an attached battery, to another radio set up in the Lincoln County Amateur Radio truck in the parking lot.

The receiver of the transmission had a similar converter that changed the radio message back into a recognizable email format for display on the computer screen at the other end.

Richards said the team has sent spreadsheets using the same method and is working on sending pictures, although most are too large to transmit this way.

Richards said this is a good way to communicate in the absence of internet or cellular service, such as in a disaster situation.

Stevens said most Mainers are prepared for major weather events that may take the power out for a few days, but he would prefer Lincoln County residents to be prepared for an even longer-term emergency situation, like a month-long power outage.