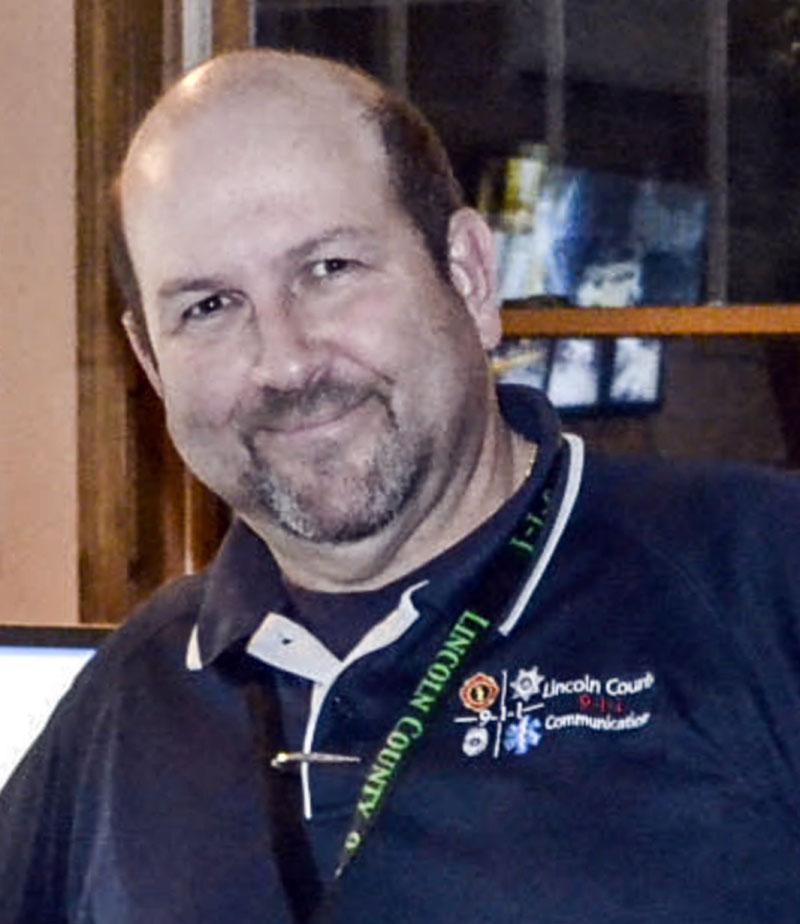 Creamer was born in Damariscotta at what is now known as LincolnHealth’s Miles Campus. He grew up in Newcastle on Pleasant Street, right next to the Newcastle Fire Department. “That’s probably what piqued his interest (in firefighting),” his son Cameron Creamer said.

Mark Creamer became a volunteer firefighter with Newcastle as a teenager. He attended Lincoln Academy, graduating in 1982. He worked for the Pine Grove restaurant in Damariscotta and Country Farms Furniture in Newcastle before landing a job as an electrician at S. F. Prentice and Sons in Bristol.

But it was that formative experience with the fire department that set him on his path with emergency services. In 1994 Mark Creamer began work as a dispatcher at the Lincoln County Communications Center, directing police and fire departments to wherever help was needed.

“He was compassionate, always there to help his callers through an emergency,” said Tara Doe, director of the communications center.

In 1999 he was promoted. “His compassion made him a good supervisor,” Doe said. “He wanted to help people. He wanted to brighten their day.”

Mark Creamer was a member of both the Atlantic chapter of the Associated Police Communication Officers and the Maine National Emergency Number Association.

He received multiple letters of commendation for his service through the years.  In 2014 he was recognized as a Telecommunicator of the Year for outstanding performance and/or teamwork in handling a particularly significant call or incident. 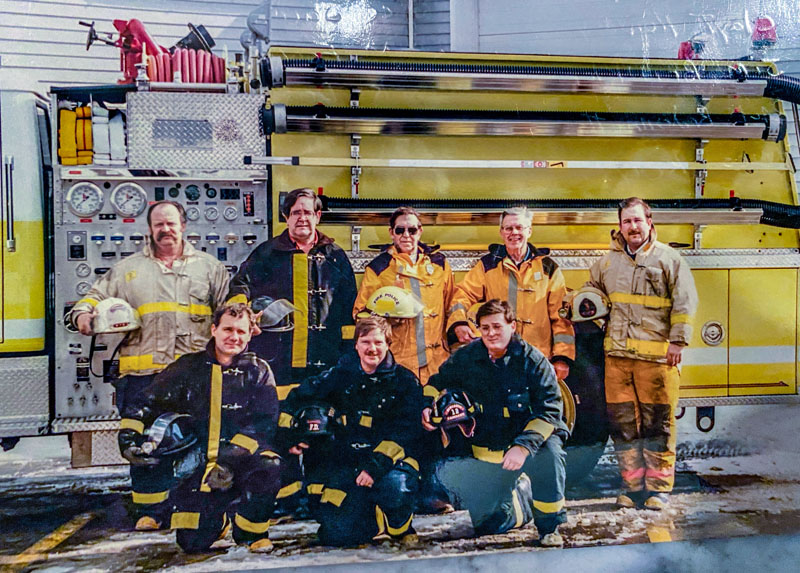 “Mark was professional and thorough when assisting responders to calls, whether they were ‘high priority’ or routine,” Doe said.

He continued to volunteer with the Newcastle Fire Department for 21 years, achieving the rank of deputy chief before finally retiring in 2003.

Lincoln County Sheriff Todd Brackett said he had the privilege of working with Creamer in a variety of capacities, including when he first started as a deputy and Creamer was a young dispatcher. When Brackett took on an extra job working part time at the communications center, Creamer was his trainer.

“Mark was just a super guy, the kind of dispatcher that made my job on the road so much easier,” Brackett said.

Over the years Brackett was able to observe Creamer as a firefighter too, how he handled scenes. “He was steady, always professional, a calming influence,” he said.

Creamer had a particular knack for keeping his voice calm when needed, Brackett said, “even if the world was coming down around his head.” But when things were less tense, “he had a wit that could crack you up.”

Interim Newcastle Fire Chief Casey Stevens worked with Mark Creamer at both the fire department and at the communications center.

“Mark is probably the funniest guy I know – a great guy, a great friend,” Stevens said. “He cared a lot about his friends, his family, and his community.”

“A number of us in the company worked for a while with Mark and we’re surely going to miss him,” Stevens said. “The fire company extends deepest condolences to the family.” 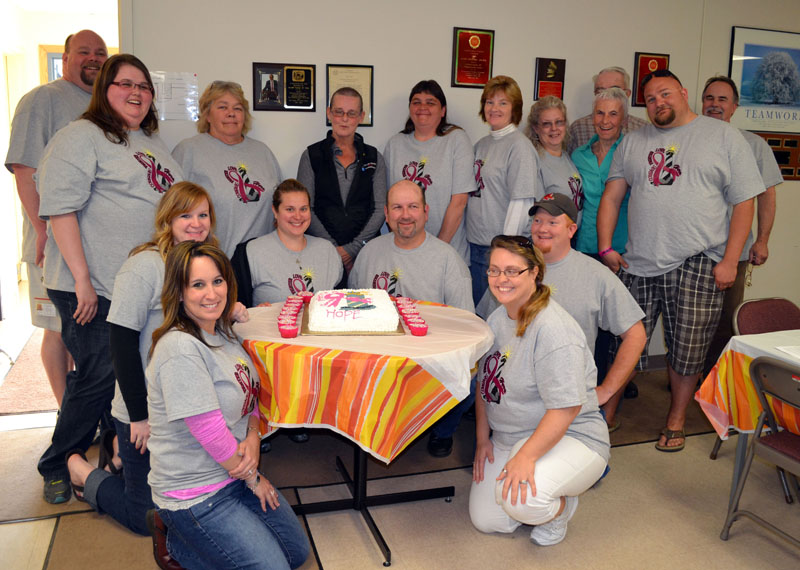 “We’re taking it one day at a time, sharing a lot of memories, a lot of stories,” said Doe of Mark Creamer’s coworkers at the communications center. “And there are a lot of tears.”

Mark Creamer was brought up in a household that was focused on family, with parents who were demonstrably affectionate with each other and with their children. Not surprisingly, family was the driving force in his life, according to son, Cameron Creamer.  He doted on his wife, Kim, his children and his two grandchildren.

Mark and Kim Creamer have been married for 19 years. Mark Creamer has two stepdaughters, Kaitlyn Look and Merissa Look.

He and first wife, Rochelle Nutting, Cameron Creamer’s mother, were together for 11 years. Cameron Creamer admired how his parents dealt with their divorce – he called it “the best co-parenting I could have asked for.”

Mark Creamer played drums in high school for a band called Spare Parts, and in a way he never stopped.

“I don’t think I ever took a car ride with my father without him air drumming every song on the radio,” said Cameron Creamer. “He listened to everything.”

Kiss was a particular favorite, along with Bob Seger, Rush, Foreigner, Journey. And Elvis.

Doe said everyone would probably have a similar memory of Mark Creamer – how he could always be heard drumming his fingers along to one tune or another.  “He was always the one to make someone smile. He was always humming a tune, tapping his fingers,” Doe said. “He brought his love of music to all he did.”

Mark Creamer loved camping too. According to Cameron Creamer he camped all over down east, and made annual trips to Papoose Pond. He met his wife Kim while camping. And after his diagnosis in June, the couple camped whenever they could.

Short track racing was another passion. He could often be found at the Wiscasset Speedway, the Oxford Plains Speedway, or at the Beech Ridge Motor Speedway in Scarborough. He didn’t race, but his son did. And Mark Creamer loved to watch him. “It was our dad-and-son time,” Cameron Creamer said.

Mark Creamer was also an avid Boston Bruins fan, and he named his son after his favorite player, Cam Neely.

The last six months have been up and down, starting in June with the diagnosis of stage 2 multiple myeloma. While it was a blow, Mark Creamer and his family remained optimistic.

After a brief hiatus following the diagnosis he continued to work part time around his cancer treatments until, on Nov. 29, he was diagnosed with COVID-19.

According to Cameron Creamer, the doctors said his dad had been very close to remission when he tested positive. The virus weakened his immune system and the cancer accelerated.

Mark Creamer fought both the cancer and the virus over the course of the next month, but at 5:03 p.m. on Dec. 22 the Lincoln County Communications Center transmitted the following: “Lincoln all units.  It is with great sadness and heavy hearts that the Lincoln County 9-1-1 Communications Center and the Newcastle Fire Company announce the passing of Supervisor and former Deputy Fire Chief Mark Creamer … ”