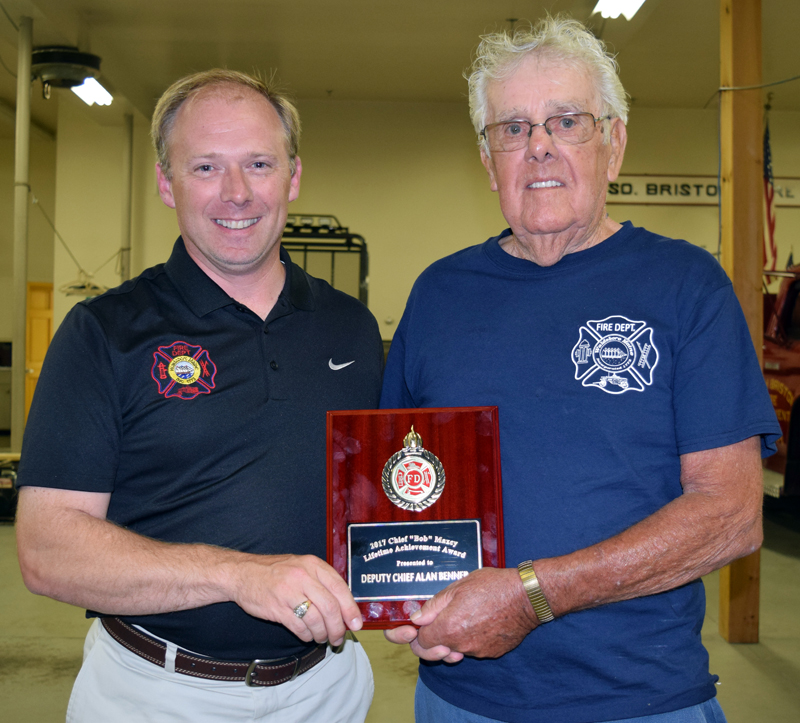 The Lincoln County Fire Chiefs Association recognized members for lifetime achievement and for their ongoing commitment to the fire service and the association during its annual meeting Wednesday, Aug. 16.

After the meal and a business meeting, association President and Jefferson Fire Chief Wally Morris opened the awards presentation.

Benner was a member of the department for more than 60 years.

“He served under the leadership of Chief Robert Maxcy and Chief Richard Glidden. Together, these three men worked hard to improve equipment and training for their department,” Smeltzer said. “Allan never wavered from his true beliefs in what he thought was best for the firefighters, and he would fight to the end for what he believes.”

“His sense of humor continues to brighten any gathering of the Lincoln County Fire Chiefs Association, of which he remains a faithful member,” Smeltzer said.

The award bears the name of the late Robert M. “Bob” Maxcy, who was Waldoboro’s fire chief from 1964 until his death in 2006.

Smeltzer also nominated Roberts for the Officer of the Year Award.

“Chief Roberts has worked tirelessly for the advancement of the fire service in Lincoln County,” Smeltzer said in his nomination.

Those efforts include the compilation of a resource guide with details on equipment available from each department, as well as playing a key role in the development of the Lincoln County Firefighter Strike Team.

“He serves on many of (the association’s) committees and is always willing to speak up and tell the truth as he sees it,” Smeltzer said. “With a young family at home, John is still willing to help when called upon if at all possible.

“He has demonstrated that he is a true leader on and off the fire ground. We can all learn a great deal from him as a chief, instructor, firefighter, and gentleman.” 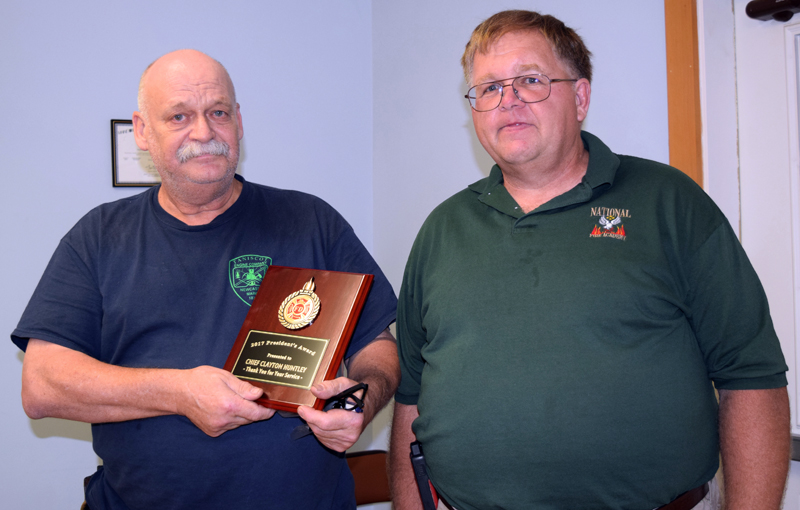 Roberts has been a firefighter in Damariscotta since joining the department in 1999 at the age of 18. He was previously a captain, training officer, and deputy chief. In 2013, the members of The Massasoit Engine Co. elected him chief.

“I’m extremely honored to have been selected,” Roberts said. “But it’s really my pleasure to be able to work with so many great firefighters and officers in the county that are just as deserving of the award.”

“The commitment and dedication of the firefighters on the Damariscotta Fire Department make the job easier and fulfilling,” Roberts said.

Roberts is an associate publisher of The Lincoln County News.

Whittemore owns a trucking company and brings a lifetime of experience with heavy vehicles to the department.

“Not only is he valued for his technical expertise, he is always ready to take the trucks for service appointments or other calls,” Whitney said. “And since he lives close by, he is always first to drive a truck to a call.”

Whittemore is relatively new to the Lincoln County fire service. He moved to Alna in October 2015. He runs his company, Jeff Whittemore Transportation, of Gloucester, Mass., from home.

He joined the department in February 2016 after a chance run-in with Alna Fire Department Capt. Stewart Rhine.

Rhine and Whittemore have the same street number on different streets, and one day FedEx delivered a package for Whittemore to Rhine. Rhine brought the package to Whittemore, and Whittemore asked him about his Alna Fire Department shirt. 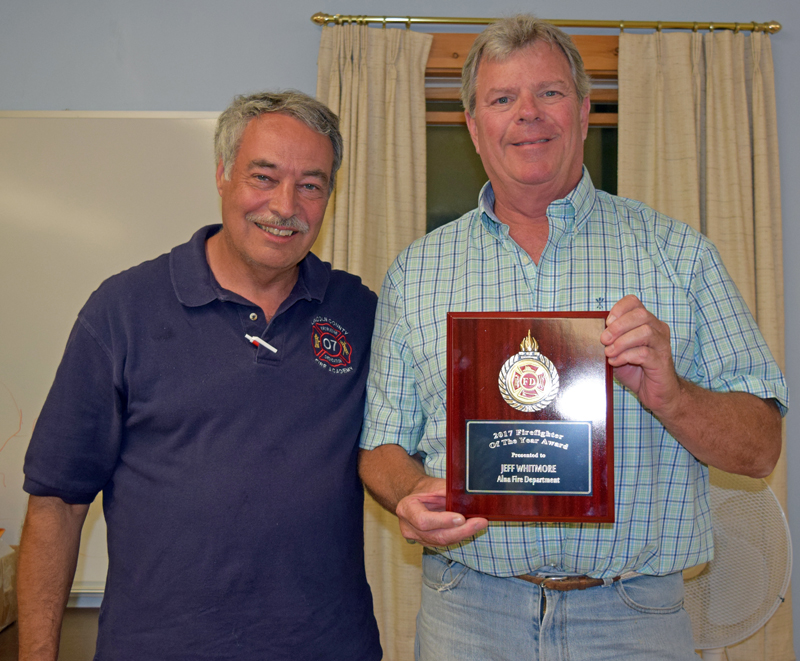 “I said, ‘Stewart, am I too old to join up?’ And he said, ‘I’m older than you!’” Whittemore said. “The very next Wednesday, I walked in the door, and that was the beginning of it.”

Whittemore said he had never belonged to a fire department before, but he moved to Alna alone and needed something to do away from the office. He also needed a place to meet good people, and said there aren’t any better than the local firefighters.

While his skills as a driver alone are valuable, “I didn’t want to be a spectator,” he said. He attended the Lincoln County Fire Academy to earn his basic firefighter certification. He was a member of the academy’s biggest class ever, which graduated in April.

Now, Whittemore loves being a firefighter and is in the fire service “for the long haul,” he said.

When Whitney invited Whittemore to attend the meeting, he figured the department just wanted to introduce him around. “I had no idea that was coming down the road,” he said of the award.

Morris presented the President’s Award to Huntley, thanking Huntley for his advice as Morris has taken on the leadership of the association and referred to Huntley as “a dedicated leader in the fire service here in Lincoln County who remains committed to this organization in so many different ways.”