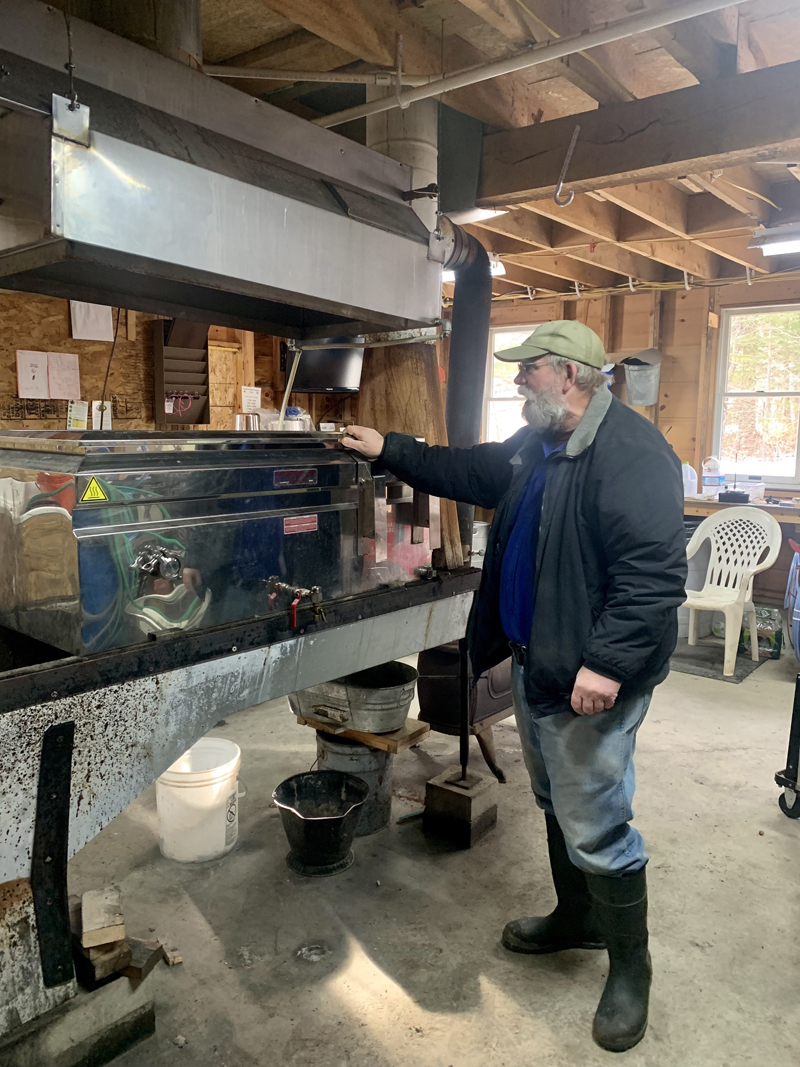 John Lee, owner of BlackOwl Maple Products, stands next to the boiler in his sugar house. He is not boiling sap this year. (Anna M. Drzewiecki photo)

At the sugar house at Sweetwoods Farm in Newcastle, Justin Wood checked his equipment. After 10 months dormant, it needed some attention before the sap started running. Which happened early this year, according to Wood, before Valentine’s Day.

Wood taps around 2,200 trees on his property, which extends from just off Route 1 down to Dodge Point Preserve nearing the Damariscotta River. It’s an old house guarded by even older trees. He taps a combination of red maples and sugar maples, using a vacuum system to usher the sap from the woods to the sugar house on the front of the property. Inside, he uses a reverse osmosis machine to remove some excess liquid before running sap through a boiler he constructed.

“Last year was just off. The sugar was low and the season ended suddenly,” said Wood. This year is off to a better start – a much better start.

With temperatures warming during the day and continued freezes at night, the Maine maple season has begun. Woods’ syrup will figure into the annual Maine average of over 575,000 gallons of maple syrup, as estimated by the Maine Maple Producers Association.

Wood first tried tapping maple trees while studying at Unity College, but he didn’t get into the business until 2018. He adds a few more trees practically every time he goes out, he said, he can’t help it. He hopes to reach around 4,500 total.

“The day I stop learning in the woods, I’m done,” said Wood. He spoke with reverence of late nights chopping wood trying to keep up with the demands of the fire, which can heat the boiler up to 600-700 degrees Fahrenheit.

Tops’l Farm, a lodging and restaurant space in Waldoboro, has announced the fifth season of its reservation-only Sugar Shack meals for the last two weekends in March.

“Maple sugaring season is quite possibly New England’s quickest and sweetest, and we celebrate our local heritage and flavor every March,” reads the notice on their website.

Then of course there are those who boil sap from their trees at home.

According to John Lee, owner and operator of BlackOwl Maple Products in Jefferson, there aren’t as many neighbors in the business as there once were. There were eight or nine others still active when he started in 2013. Now, most have stopped running. Lee thinks it’s a combination of factors, including age. Speaking from inside his sugar house off Route 32, Lee said he would not be tapping trees or boiling this year either.

Usually, Lee would start in the woods in the middle of January, cutting some trees, doing line maintenance, and getting ready to go in and tap with the help of a few family members. He has 200 taps set up now, though he used to do 350.

“These taste the way it used to, the way people my age remember,” said Lee, pointing to the dark maple candy pressed into the shape of an owl for the sugar house’s namesake: The black owl.

“It’s real rewarding to take something nature gives you and not add anything to it, just process it in different ways and have something, all natural, that you made,” said Lee. “There’s a lot of reward in that.”

The sugar house will be open when the open flag is flying, and at other intervals, if Lee receives a call from someone who is interested. The sales area remains open and will be for Maine Maple Sunday during the last weekend in March, when sugar houses across the state will open their doors to thousands of visitors.

Lee used to boil sap for a few other farmers, too, though not this year.

Wood, who works the maple season in addition to his full-time job, is kept busy enough with sap from his own trees. When boiling, Wood feeds the fire every six minutes. Sometimes, the process lasts eight hours straight.

He experimented with birch syrup a few years ago – whose season follows maple and requires the same equipment – but couldn’t find a steady market. Plus, there are few regulations and little information for Maine birch syrup makers.

The market for his maple syrup is much clearer, he said. He doesn’t distribute very far – and there’s demand for more, if he could make it. Wood spoke joyfully about the season, in all its unpredictability and relentless nature.

His sugar house is open, too, with an honor system for payment on the weekends. Everyone is welcome to come learn, said Wood. He keeps a log with mock taps to demonstrate the process, and the doors to the sugar house are open.

Last year, on Maine Maple Sunday, around 2,000 visitors stopped by the small wooden structure, which Wood rescued from down the road and refurbished to its current state. The weekend typically comes near the late middle of the short season. But there’s no predicting, despite best efforts, said Wood, who studies his trees, the weather, and the sap feverishly and still accepts the unknowns.

For more information about Maine Maple Sunday, go to visitmaine.com.