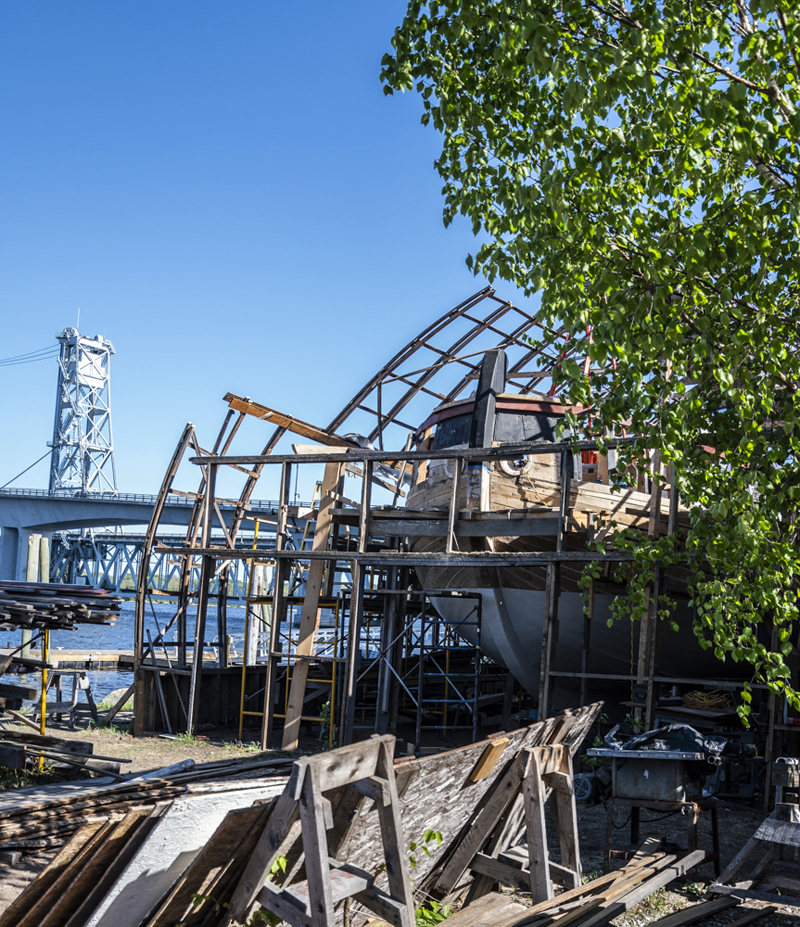 The Virginia in Bath on May 18. After more than two decades of planning and building, the vessel will be launched into the Kennebec River on Saturday, June 4. (Bisi Cameron Yee photo)

Lincoln County has a rich history of shipbuilding with its miles of coastline, good harbors, forests of white pine.

Wiscasset was a shipbuilding center from the late 1700s. South Bristol’s Gamage family built wooden ships starting in the 1850s. According to a shipbuilding history of the Twin Villages by essayist Barnaby Porter, at least 700 vessels were built and launched in shipyards around Damariscotta and Newcastle.

The first five-masted schooner, the Governor Ames, launched in Waldoboro from the Leavitt Storer Shipyard. Boothbay Harbor still hosts tall ships during its annual Windjammer Days. Lincoln County once encompassed Bath where Maine’s First Ship, the Virginia, was originally built and is now being reconstructed.

Travelers crossing the Carlton Bridge into Bath are used to looking east toward the tall cranes of the Bath Iron Works and the grounds of the Maine Maritime Museum. But soon there will be a reason to look to the other side of the river where the reconstruction of the 17th-century pinnace Virginia will be anchored starting Saturday, June 4.

Kirstie Truluck, executive director of Maine’s First Ship, has lived in Bath for three decades. She often refers to the Virginia as “Bath’s best-kept secret.”

“There are whole swathes of people in this city that just don’t really know (about it). It’s sort of hiding in plain sight,” she said.

The Virginia is already an economic driver for the city, bringing in 6,000-9,000 visitors a season, according to Truluck. When it takes its place on the Kennebec River alongside the Bath Iron Works and the Maine Maritime Museum, Truluck said the Bath waterfront will be “the most powerful nautical mile in Maine.”

Truluck is new to the project, brought on board at the tail end of 2021. Her admiration for the long-term volunteers, “the history buffs, the boat aficionados,” is evident. “These are creative people, these are curious people … they are problem solvers of the highest order,” she said.

She pointed to 2008 when the market was way down and funding dried up. “Our shipwright Rob (Stevens) and a small group of people said ‘this isn’t give-up time. This is do-it-differently time.’” She called it the “Field of Dreams” approach – “if you build it, they will come.”

That strategy certainly worked for volunteer recruitment. “They came because someone introduced them to the project and they were intrigued by it,” Truluck said. “They stayed because of the community they created.”

“We want to find ways to keep that alive,” she said. “These are the people you want to be with when the zombie apocalypse comes. Because they can fix stuff. And they have a boat.”

The original Virginia was built around 1607 by members of the short-lived Popham Colony, which settled briefly near the mouth of the Kennebec River. The Popham Colony, once lost to history, was rediscovered in the 1990s. Archaeological excavations brought the existence of the original Virginia to light. It was the first ocean-going English vessel built in the Americas and it validated Maine’s status in America’s maritime history.

Fred Gosbee and wife Julia Lane, who make up the Round Pond-based traditional music duo Castlebay, were first introduced to the project when they were invited to entertain volunteers helping unearth the Popham Colony.

In 2011 they helped lay the 39-foot long keel. Gosbee, who worked for 13 years at the Bath Iron Works, had an interest in local history, shipbuilding, and wooden crafting. He began volunteering regularly around 2013. “I just go there and make chips and trouble,” he said.

Gosbee worked with a variety of woods, spending three and a half years helping form the three masts, the bowsprit and the rudder. The wood for the main mast came from a 56-foot pine that he helped whittle down to 47 feet.

Gosbee used wood from a donated black locust to craft weather impervious deadeyes, circular wooden blocks used to manage the rigging. Elm wood, lighter than oak but just as strong, was salvaged from a dead tree in Bristol Mills and used to construct the crow’s nest.

The bulk of the ship is white oak, which Gosbee said has been hard to get. The Virginia is in competition with the Jack Daniels distillery in Tennessee, which uses white oak barrels to age its whiskey.

Richard “Dick” Brown, of Dresden, was walking around the Bath waterfront in 2019 when he ran into a friend who was volunteering at the build. He was quickly recruited.

While Brown’s career revolved around health care and brain science, he was not without practical skills to offer. He grew up on the coast of Massachusetts always around the water, on the water, or in the water, “sometimes not voluntarily,” he said. He had also picked up carpentry from his uncles and grandfathers.

Brown’s long and varied history of volunteerism was informed by a desire to be a lifelong learner. There are other perks: picking up tips of the construction trade as they relate to maritime endeavors, seeing progress unfold before his eyes, the visible, functional, “touch me” result. And the camaraderie. “You just felt welcomed the minute you walked into the shed,” he said.

Roger Barry, of Edgecomb, had just moved to Maine from Indianapolis and was visiting the Bath Farmers’ Market when he walked out the door, saw the Virginia, and immediately asked “Who do I talk to?” He’s been a volunteer for 10 years.

Barry is a wood sculptor and brought that talent to bear on the Virginia’s hull. He said it took about five years to put the frames on, another five years to put the planks on and “then the last year was just decorative.” He’s also a graphic designer and created the logo for Maine’s First Ship.

For him, the Virginia represented an opportunity to collaborate with other woodworkers, but he soon made more connections. “It’s a meeting place for an interesting project,” he said.

Daniel Sortwell, whose family dates back to the 1700s in Wiscasset, also came to the Virginia courtesy of the Bath Farmers’ Market. A food scientist, he began roasting coffee beans as a hobby when he retired. As the hobby expanded he began selling Big Barn Coffee at the market, which happened to be located at the historic Bath Freight Shed where the Virginia was under construction.

Sortwell now serves on the board of directors for Maine’s First Ship, and has been heavily involved in keeping the building site safe including retrofitting it with exhaust fans to improve ventilation during COVID-19.

“We have a group of people who love working on wooden ships. That’s much truer in Maine than in other parts of the world and they don’t want to lose these traditional … skills,” he said. “I think that this launch of the Virginia is going to hopefully reawaken people’s awareness of (Maine’s history of boat building),” he said.

Gosbee thinks the launch will be a bigger deal than anybody else imagines. “They’re thinking maybe 500 people will come,” he said. “And I’m thinking I wouldn’t be surprised to see 5,000.”

Brown keeps a quote from Margaret Meade taped above his computer: “Never doubt that a small group of thoughtful, committed citizens can change the world. Indeed, it is the only thing that ever has.”

“It encompasses on so many levels exactly what happened with Maine’s First Ship,” he said. How the project stalled and was then reenergized, how the long-term volunteers kept the commitment alive, drawing in new people “and just keeping the thing going.”

“And now look what we’ve done – we’ve changed the world!” he said. “We’ve certainly changed the waterfront in Bath. It’s not gonna be a secret anymore. It’s gonna be out there. Masts up, sails flying.”