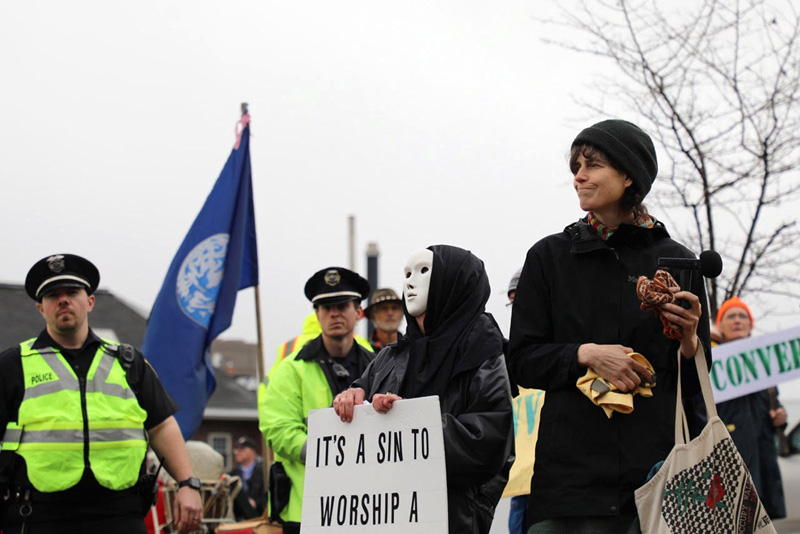 Suzanne Hedrick (with mask) and Carolyn Coe protest at Bath Iron Works the morning of Saturday, April 27. Hedrick was one of two county residents among the 25 protesters arrested Saturday. (Photo courtesy Natasha Mayers)

Two Lincoln County residents were among 25 protesters arrested at Bath Iron Works the morning of Saturday, April 27, after allegedly blocking traffic during a christening ceremony for the future USS Lyndon B. Johnson.

Bath police arrested Suzanne Hedrick, 88, of Nobleboro, and Natasha Mayers, 72, of Whitefield, for obstructing a public way, a class E misdemeanor, at about 9 a.m. Saturday, according to a press release from the Bath Police Department.

The protesters were from Code Pink, the Global Network Against Weapons and Nuclear Power in Space, and Maine Veterans for Peace, according to the release.

Hedrick, who has been a peace activist for well over 50 years, said she opposes the size of the nation’s defense budget at the expense of other needs, including education, health care, and poverty.

Hedrick said she spoke with U.S. Rep. Chellie Pingree, D-Maine, in Augusta on Tuesday, April 23, during a youth day of climate action, about the size of the defense budget. 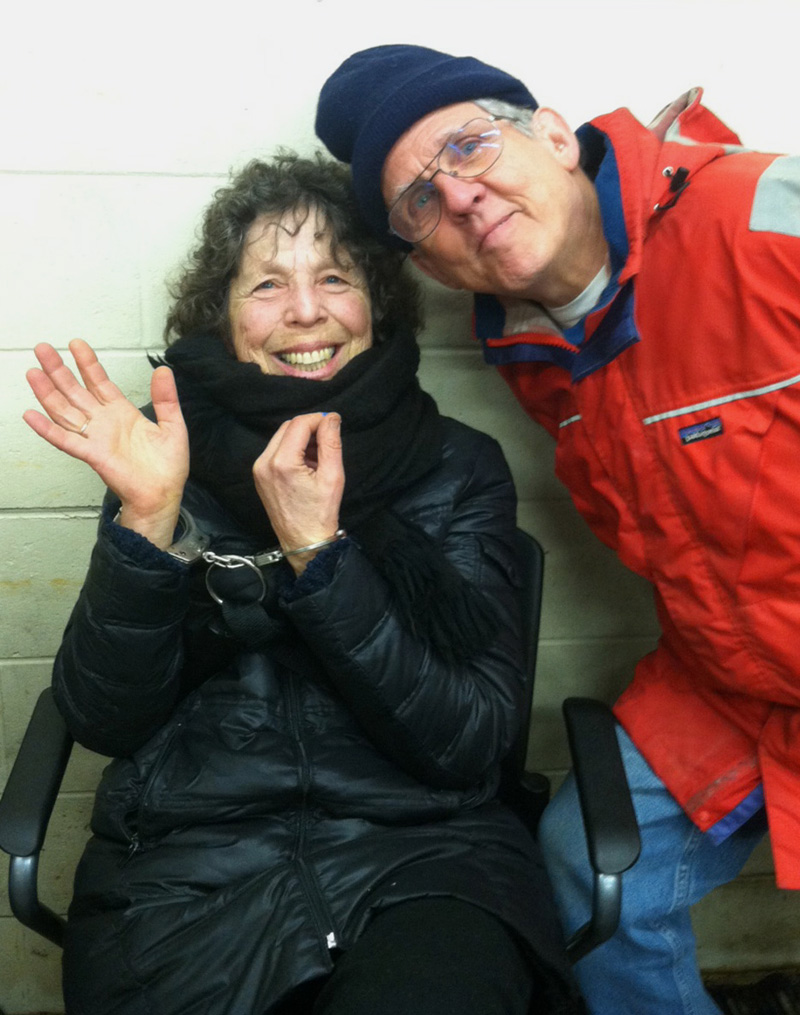 Natasha Mayers, of Whitefield, waves to the photographer after her arrest at a protest in Bath on Saturday, April 27. (Photo courtesy Natasha Mayers)

“We want to educate people, people who will eventually rise up and say ‘Enough is enough,’ who will say, ‘Enough war and enough of war-making,’” said Hedrick, a member of Midcoast Peace and Justice.

Mayers shared a similar perspective, expressing her concerns about the government spending money to build warships instead of to combat climate change or build ships for medical purposes.

Mayers was also arrested at a 2017 protest. She and other protesters went to trial, where a judge dismissed the charges.

Mayer attended Saturday’s protest independently, but belongs to the Artists Rapid Response Team! – an organization that promotes social change in Maine through art. She made and brought a large cardboard ship sign that read “hospital ships not warships.”

As a Catholic, Hedrick said she opposes the use of a christening ceremony for a weapon of war.

“The ship is a destroyer. It is built to destroy other countries and kill other people. To build a destroyer is an oxymoron,” Hedrick said.

The USS Lyndon B. Johnson is the third and final Zumwalt-class destroyer built for the U.S. Navy at Bath Iron Works.

Hedrick said she worries about the debt the nation is incurring as its defense budget grows.

“I have two grandchildren in college. We have a massive amount of debt,” she said.

In addition to the fiscal implications of the construction of ships like the USS Lyndon B. Johnson, Hedrick said she opposes the U.S. role in arms proliferation.

“We are the world’s arms dealer. We sell weapons all over the world, and oftentimes they are used against us,” Hedrick said.

Hedrick said she has traveled to several countries, including Nicaragua, where she has seen the detrimental impact of U.S. foreign policy.

“Over the years I’ve seen the U.S. involved in so many issues it has no business being involved in, overthrowing legitimately elected governments. We spend more on the military than any other nation in the world and have 800 military bases worldwide, many of which are in Africa,” Hedrick said.

Hedrick pointed to ongoing sectarian violence in Yemen, the Saudi-led coalition’s attacks on civilians, and material support from the U.S. to that coalition as an example of a needless and costly conflict.

“Yemen poses no threat. There are people dying of cholera and starving to death,” Hedrick said.

Mayers said she was in the Peace Corps and traveled to many countries. The experience that prompted her to protest at BIW was a conference several years ago on Jeju Island in South Korea, with the Global Network Against Weapons and Nuclear Power in Space and other peace groups.

Ships built at BIW were based on the coast of the island.

“I felt a real shame that we were sending these giant missile ships and warships out to this space that was absolutely destroying the sweetest little village on the coast of this island,” Mayers said.

She described the base as “criminal,” with barbed-wire fences and “miles and miles of concrete coast.” 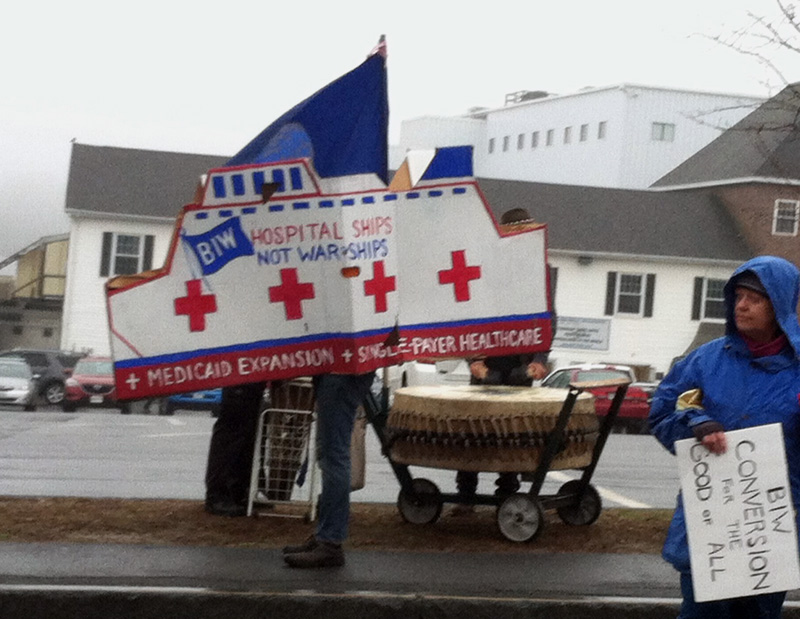 A sign at a protest of the christening of the USS Lyndon B. Johnson at Bath Iron Works on Saturday, April 27. The sign calls for BIW to build hospital ships instead of warships and advocates for Medicaid expansion and single-payer health care. (Photo courtesy Natasha Mayers)

“This village that looked like a little village in Maine was being totally destroyed for the American need to dominate the South China Sea,” Mayers said.

According to a press release from General Dynamics Bath Iron Works, the christening ceremony for the Navy’s newest guided-missile destroyer featured speakers from Maine’s congressional delegation, in addition to Lynda Robb and Luci Baines Johnson, daughters of the late president for whom the warship is named.

The ship will join the Navy’s fleet “with the promise of Maine’s shipbuilders that Bath-built is best-built,” Dirk Lesko, president of General Dynamics Bath Iron Works, said in the press release.

“These shipbuilders and this Navy realize, with Daddy, that we need to look forward,” Robb said in the press release.

On Saturday, 50-75 protesters lined the sidewalks on both sides of Washington Street, near the junction of King Street, in opposition to the christening ceremony for the Zumwalt-class destroyer, according to the police department’s press release.

The press release states that protesters blocked traffic on Washington Street and surrounded a bus at about 9 a.m., at which time eight protesters behind the bus were ordered to get out of the road or face arrest. When they refused, they were arrested.

According to the press release, at about 9:30 a.m., a group of protesters blocked King Street, at which point they were warned to get out of the roadway or face arrest, and 17 more individuals were taken into custody.

The press release states that at about 10 a.m., all roads were open for traffic to pass. During the arrests, some of the protesters lay on the pavement in defiance of the order to get out of the road, but this act notwithstanding, all cooperated with the arrests and subsequent booking procedures.

The Maine State Police assisted at the scene and the Sagadahoc County Sheriff’s Office assisted with transportation of the protesters to the Bath Police Department, where they were booked and made bail.

The protesters will go to court June 18.