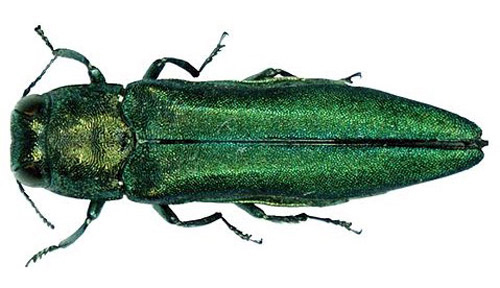 The Emerald Ash Borer is an iridescent-bodied beetle no bigger than a penny. Its emerald tones are reminiscent of stately varieties of scarab beetles, with their backs that catch the light, shimmer.

But looks can be deceiving. For an ash tree, the Emerald Ash Borer bores to death – not with puns or unsolicited advice, but with its eating habits: The beetle bores until the tree is a hollowed matrix of dry dead wood.

“The concern is that towns – including Whitefield – are not, don’t have this on their radar and really aren’t prepared for large numbers of trees dying along roadsides all at once,” said Charlene Donahue, who worked for the Maine Department of Agriculture, Conservation, and Forestry for 25 years and now serves as vice chair for the Whitefield Select Board.

Towns should start by taking an inventory of large ash trees along the roads, recommended Donahue.

Ash is a dry wood, she explained, which means that when one tree dies, it falls apart quickly, unlike other Maine species like maple trees. In fact, when the standing tree carcass is cut down, it shatters. This creates a “debris field” that can be much more difficult to clean up.

“If you don’t even know what your risk is, then it could really hit you as a surprise,” said Donahue.

Maps provided by the Maine Department of Agriculture, Conservation, and Forestry show current data for Emerald Ash Borers’ range in Maine since they were first observed in both Aroostook County and York County in 2018.

The beetles have since been found in Cumberland County and parts of Oxford County, adding them to the quarantine zones for ash trees. Twenty-five U.S. states and various smaller areas are also under quarantine for the beetle as determined by the United States Department of Agriculture, Animal & Plant Health Inspection Service and the United States Forest Service.

“One of the major concerns in Maine in terms of the ash trees is Native Americans’ use of ash in their culture,” added Donahue. “This has been on their radar for many years.” Concerns about the trees are both cultural and environmental.

According to the Maine Department of Agriculture, Conservation, and Forestry’s website (ACF), “Organisms that rely heavily on ash, including dozens of native arthropods, will also decline or be eliminated. Industries and individuals that rely on ash will be affected. Infested areas and surrounding locations will be quarantined, which results in restrictions on movement of ash trees, logs, pulpwood, and other raw-wood products. The regulations also prohibit movement of untreated hardwood firewood to areas outside the quarantine.”

The plan is updated every five years with risk analysis and an overview of towns’ various mitigation projects.

But the plan only addresses current hazards that have historical data to draw from, said Barnes.

“Blight, and especially the Emerald Ash Borer as you mentioned, is definitely an issue that will require attention. However, the decision about which risks to be profiled in the Hazard Mitigation Plan is based on previous experience to date, and would need data such as the frequency of occurrences to date, monetary damage of those occurrences, etc,” said Barnes. “Since Lincoln County did not have strong enough data or examples of widespread blight from recent history, we did not include it in this 2022 update.”

She added that it may appear in future updates, noting that it could be something towns respond to through tree removal, potentially with help from the Maine ACF.

Hillary Peterson, an entomologist at the Maine ACF who works on integrated pest management, said the Emerald Ash Borer is “not a specific item” for the upcoming IPM Council meeting on March 2, though she noted that the meeting will have time for questions from the public.

Besides, Emerald Ash Borers are not necessarily a major concern compared to other so-called pests – at least, not yet.

Donahue noted that it may not even be a huge issue in Lincoln County, like it has been in places with more ash-dense forests. According to the Emerald Ash Borer Information Network, over the past 20 years, the beetle “has killed more than 30 million ash trees in southeastern Michigan alone.”

Plus, the insect of focus this month for State advocacy programming is the Browntail moth.

But dealing with current issues should not stop us from planning ahead, insisted Donahue, who served as Maine’s “point-person” on Browntail moth while working at the Maine ACF and is well aware of its impact.

“It’s not going to happen this year and it might be five years before it happens,” said Donahue of the Emerald Ash Borer’s future arrival in Lincoln County. “But when you look at what occurs in other places, it can really be a problem.”