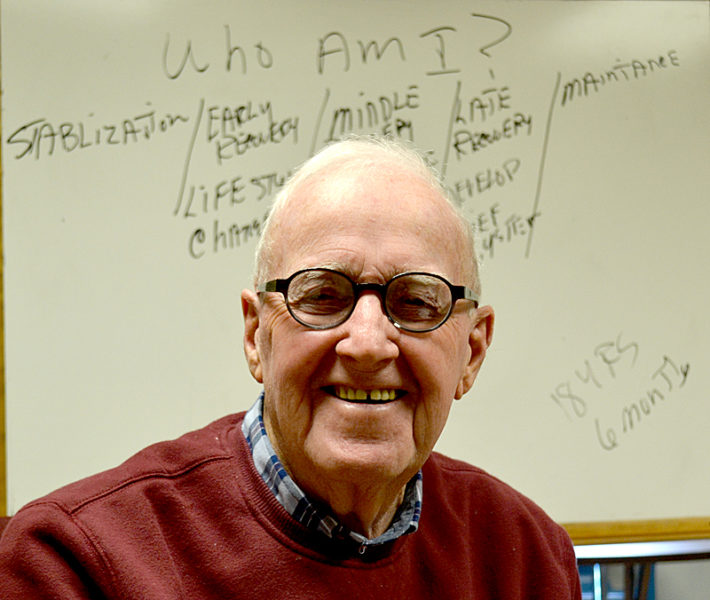 (Editor’s note: This is the second installation in a series about the drug crisis in Lincoln County.)

The number of people served through the Lincoln County Outreach Recovery Coaching program is small, but the success rate is extremely high, counselor Bill Ellsworth said.

Approximately 95 percent of inmates abuse drugs after their release from jail or prison and 60 to 80 percent commit new drug-related crimes, according to the National Association of Drug Court Professionals.

However, 75 to 85 percent of people who participate in the outreach program run by Ellsworth have broken the cycle and remain free, not just from incarceration, but also from addiction. The key to the program’s success is respect for the individual and a safe atmosphere where individuals can speak.

“There’s no great theory to it,” Ellsworth said. “It’s respect and safety. When you walk into this room, you are respected no matter what, and it is safe for you to say what you need to say.”

For more than 20 years, Ellsworth, a counselor with the Addiction Resource Center, a program of Mid Coast Hospital, has run the Lincoln County outreach program. The sheriff’s office contracts the hospital to run the program. Ellsworth has led drug and alcohol education classes and coached former inmates struggling with substance abuse as they begin their path to recovery.

“There’s a lot of activity here that not a lot of people know about,” Ellsworth said. “A lot of people are talking (about the drug crisis); we’re doing.”

At 77, Ellsworth, a graduate of the University of Maine and the New England School of Addiction Studies, said he is energized by his work. Twice he has retired and twice he has returned. It is his commitment to the community and to reducing the recidivism rate in Lincoln County that keeps him coming back, he said.

Every morning, he asks himself if he is willing “to give it his best shot.” If the answer is no, he will not go to work, he said, because his work is with human beings.

“When you put energy into your profession, you get energy back,” Ellsworth said.

“Punishment doesn’t work,” Ellsworth said. “We need to educate people; we need to encourage them.”

The program and the approach are expanding. Ellsworth has added an additional 10 hours to his schedule to run groups and counsel Lincoln County inmates at Two Bridges Regional Jail.

“He’s phenomenal,” Lincoln County Sheriff Todd Brackett said. “I have not met anyone more dedicated to their profession. He truly believes in the recovery process. He has to take credit for getting this program up and running.”

The recovery coaching model, which Ellsworth said was developed through years of experience and practice, is based on self-empowerment and self-responsibility.

“It’s working,” Brackett said. “We can show you the data.” Due to Ellsworth’s dedication and commitment, the program is not only sustainable but also able to serve as a model for others, Brackett said.

Drugs are more prevalent and more accessible than ever in modern society, Ellsworth said. Addiction rates, particularly to heroin and other opiates, are reaching epidemic proportions, and law enforcement and the Legislature are grappling with how to respond.

For the approximately 30 to 40 clients served by the Lincoln County Outreach Recovery Coaching Program on a weekly basis, however, education, encouragement, support, and respect have helped see them through their individual crises with substance abuse.

“It’s when you feel better about yourself that drugs and alcohol are no longer an option,” Ellsworth said.

Whether in a group setting or through individual counseling, the outreach program supports former inmates as they commit to their recovery, rediscover themselves, and reclaim their lives.

“There’s a lot of self-discovery that happens here,” Ellsworth said. “People discover abilities they never knew they had. People are doing things they never thought were possible.”

There is the physical addiction to drugs and alcohol clients struggle with, Ellsworth said, and then there are the areas of the person’s life that have been impacted by the substance abuse. Individuals who are arrested and come through the program typically have been using drugs and alcohol for years; many since they were adolescents, he said.

“That’s a lot of years of using and not growing,” he said. Their education has suffered, they cannot compete in the job market, and, after years of addiction, oftentimes their family has given up on them. When they walk into the outreach program, whether in handcuffs or not, those individuals are treated with respect.

“Some people are taken aback by that,” Ellsworth said. “They ask, ‘How can you respect me?’”

“You tell someone they’re a really nice person; they say they haven’t heard that in years,” Ellsworth said. “But I work with good people. Once you take away the addiction, what you have are really good people.”

Through the outreach program, clients receive training in life skills and social skills. They are encouraged to pursue their education, find gainful employment or remain employed, repair their relationships, connect with other recovery resources, and engage with the community.

In the coaching model, clients are encouraged to take responsibility for themselves and to speak for themselves. When an individual has a court date, Ellsworth encourages the person to tell the judge the positive things they are doing, be it going to treatment, making regular car payments, or working.

“I’m not going to write a letter to the judge for them,” Ellsworth said. “I put it on their lap and guide them. That’s coaching.”

When a client says they want to get off drugs and then does, “it’s incredible,” Ellsworth said, “and they’re the ones that did it.”