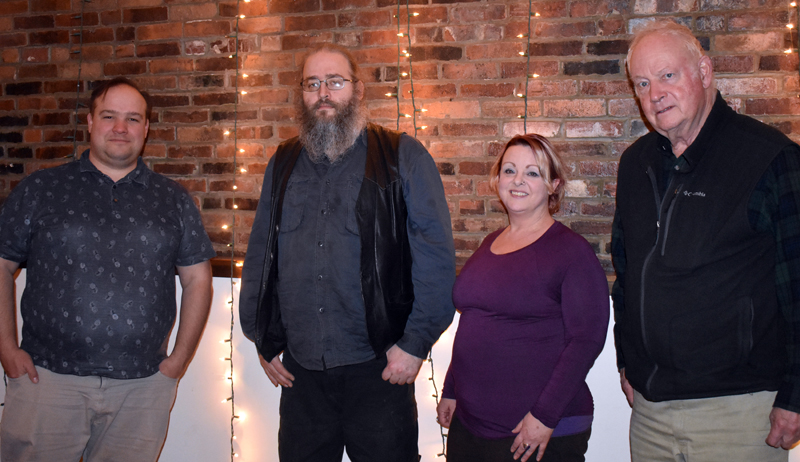 From left: Andrew Gardner, of Southport, Marc Tabor, of Richmond, Jenna McDonald, of Richmond, and Lucas Wegmann, of Newcastle, attend the Libertarian Party caucus for Lincoln and Sagadahoc counties at The Old Goat in Richmond on Thursday, Feb. 27. (Alexander Violo photo)

Four Libertarians participated in a joint caucus for Lincoln and Sagadahoc counties at The Old Goat in Richmond on Thursday, Feb. 27.

Two registered voters from the same town must show up for a county to have a successful caucus, according to party member Andrew Gardner.

The Libertarian Party has provisional status in Maine and is attempting to regain recognition as a political party. County caucuses are part of this process.

On Thursday, the Libertarians in attendance were Gardner, of Southport, Jenna McDonald, of Richmond, Marc Tabor, of Richmond, and Lucas Wegmann, of Newcastle.

The four attendees offered different reasons for their membership in the Libertarian Party.

“If you talk to four different Libertarians, you are going to get 10 different answers on what it means to be a Libertarian,” Gardner said.

Gardner related a conversation he had with a group of democratic socialists at the Common Ground Country Fair.

“I talked to them about socialism and they had a similar answer: It depends on who you talk to,” Gardner said.

McDonald said she was drawn to the Libertarian Party because it offers an alternative to the dominant forces in American politics, the Democratic and Republican parties.

“I think there needs to be other options other than the standard parties and the Libertarian Party provides that option for me,” McDonald said.

Tabor said his support for the Libertarian Party is rooted in his ideas about liberty.

“I think it is the concept of liberty itself and the mandate to always pursue it. I see that in the Libertarian Party more than in the two main parties,” Tabor said.

Gardner said the party’s support for individual rights stands out to him.

Tabor said the Libertarian Party draws members from a wide range of beliefs, from anarchists to right-wing conservatives.

“The two major parties are obsessed with power more than holding to their principles, certain core individual beliefs. If we were willing to sell out, we would be no different,” Tabor said.

Wegmann said small-government principles drew him to the Libertarian Party.

Wegmann said the Constitution does not justify the size or reach of the modern federal government.

“I’m pretty much disgusted with what the two main parties have been doing over the last 100-200 years,” Wegmann said.

According to Gardner, the Libertarian Party needs 10,000 registered voting members to regain state recognition as a party. He said the party has approximately 8,000 voting members and is pursuing other options to gain this recognition.

The Libertarian Party of Maine is suing the state for reinstatement in federal court, using an argument based on freedom of association, according to Gardner.

“You can’t tell someone you can’t be associated with a political party,” Gardner said.

According to state law, a party must enroll at least 5,000 members in the year prior to a statewide general election and must double that number by the next general election to maintain its official status.

Gardner said there are other requirements to regain the party’s official status. The party must hold successful caucuses in 14 of the state’s 16 counties and garner a certain percentage of the vote during a general election.

The Libertarian Party met the state’s voting requirements in 2016, according to Gardner. Former New Mexico Gov. Gary Johnson ran for president as a Libertarian and took more than 5% of the vote in Maine.

The party did not keep up with requirements, though, and was decertified in 2019.

Maine voters who want to register as Libertarian must write in Libertarian under “other” in the list of political parties on a voter registration form.

“If they write Libertarian, it will count. Since we are a provisional party with provisional status, we don’t have our name on there,” Gardner said.

At the caucus, the group discussed ways to grow the party and the benefits of focusing on statewide issues in comparison to focusing on municipal and county elections.

Gardner said that in the past, Lincoln County Libertarians have held joint meetings with the Green Independent Party.

“It was an effort to get people to work together on shared issues,” Gardner said.

Caucus-goers from both counties appeared to form a consensus about attempting to meet on a monthly basis in Richmond.

During the Sagadahoc caucus, Tabor was elected county chair and McDonald county secretary.

Tabor said delegates to the 2020 Libertarian national convention will be nominated at the state convention in April.