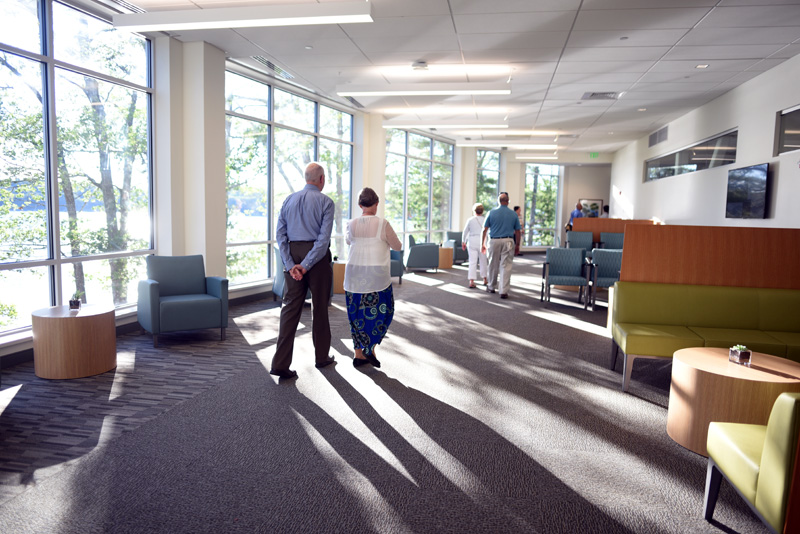 Guests walk through one of the waiting rooms in the new Herbert and Roberta Watson Health Center on LincolnHealth’s Miles Campus in Damariscotta, Friday, Aug. 10. (Jessica Picard photo)

LincolnHealth celebrated the completion and upcoming opening of the Herbert and Roberta Watson Health Center with a ribbon-cutting ceremony the evening of Friday, Aug. 10.

The outpatient health center, which will consolidate many of the physicians on the Miles Campus in Damariscotta into a single building between the hospital and Schooner Cove, will officially open Aug. 20, according to MaineHealth Marketing Manager Christine Henson.

Herbert and Roberta Watson are longtime volunteers at LincolnHealth.

“You’re literally within steps of your team members,” Lisa Bowers, LincolnHealth’s director of primary care, said of the new space.

“Having physicians closer together will help from a patient care perspective,” Stacey Miller, LincolnHealth’s vice president of physician services, said.

The $13.7 million center has been in the works since 2010. LincolnHealth had saved $9.7 million for the building and an additional $3.2 million was raised during the “quiet phase” of fundraising, during which the hospital approached donors.

The final $700,000 was raised over the past year through the public Cornerstone Campaign, co-chaired by LincolnHealth board member Marva Nesbit and LincolnHealth Chief Medical Officer Dr. Russ Mack.

The first floor of the new health center houses Maine Behavioral Health and features a community room with a patio.

The second floor, which has a large waiting room overlooking the Damariscotta River, will house primary care practices and some specialists, while the third floor, also with a bright waiting room, will be the home of general surgery, the women’s center, orthopedics, and other specialties.

The fate of the buildings that previously housed the practices has not been decided, according to Miller.

Those in attendance at the ribbon-cutting ceremony gathered in the first-floor community room for remarks by LincolnHealth officials.

LincolnHealth Board of Trustees Chair William Logan recognized LincolnHealth CEO Jim Donovan for his dedication to the project.

“You never wavered in your belief that this was going to happen,” Logan said to Donovan.

Donovan then spoke, thanking those involved with the project, from the planning stages in 2010 to the 13 months of construction.

Donovan then announced that the community room was dedicated to Nesbit and Mack for their devotion to the project.

“We should be very proud,” Nesbit said to the crowd.

“We are talking about a different way to practice medicine,” Mack said.

Mack, Roberta and Herbert Watson, Donovan, and Nesbit then lined up with a ribbon in front of the elevators.

Roberta Watson gave a speech, noting the value of volunteering.

“Volunteering is not only good for your soul, but for your health and well-being,” she said.

She went on to say that there should be an “et al” or “and others” after her and her husband’s names on the building, since there are so many volunteers and others who made the project possible.

The Watsons then cut the ribbon and the crowd was invited to explore the building.

“This building will mean everything to our community,” Nesbit said. “The benefits are too numerous to list.”